16/9: Our plan was to get up at 5am & get cracking early. We had 22.5kms to do, the last 2.5kms along a spur trail that goes in to the town of Collie. We slept in to 5.10am & didn’t get going to 6.45am. Well I was waiting eager to go at 6.30am with backpack on, like a bull at the gates I was feeling impatient with waiting for Ambles! Then I had to walk slower which is painful, I like to move fast & was itching to get into town. Feel like changing our name to Ambling Roadrunner😆. Ambles went oh so slowly, using his poles to help with his knee. He kept stopping & rubbing Goanna Heat on, started moving again. We played Tag Team with Jeremy passing each other several times. Was a nice walk to the Harris Dam, spotting some fairyville set up similar to gnomesville with plastic creatures, fairy’s, dolls, gnomes & flowers decorating around the trees. 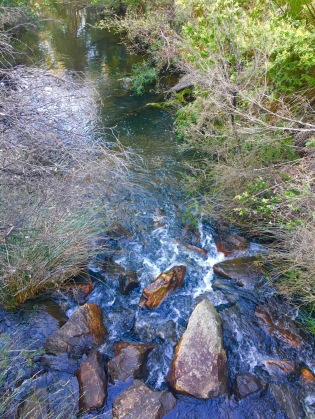 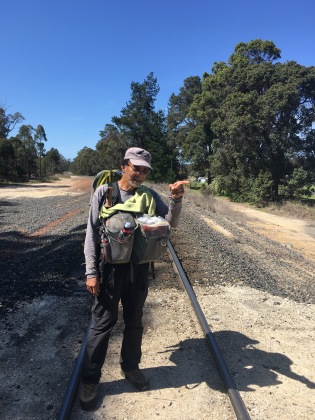 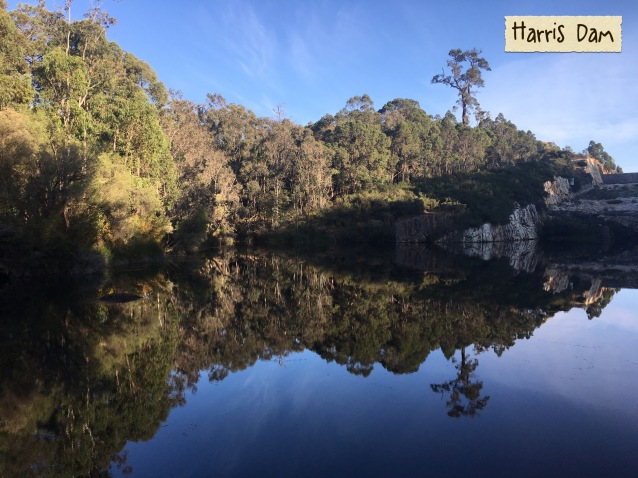 After the Dam, most of the walking cuts across many other trails, mountain bike trails with funny names, and The Munda Biddi at times shares the same path. I thought with all these tracks might be easy to get lost, but the Bibbulmun was well marked. We stopped for a bite to eat & Jeremy had the same idea. It would have been 1.30 when we got into Collie & after walking pass my trail angel Kerry, managed to locate her! We had booked at the Colliefields, an old building operating as a backpackers hostel. Our tiny room right at the end of the building has its own bathroom en-suite. A cramped little room but would work nevertheless. We took our food box from Kerry up to the room then settled for a late lunch before the cafe side closed with her. The Colliefields is the hikers hub & we bumped into Wayne whom also is staying there. Poor Wayne, he had a knee blowout & was in a lot of pain. He said that double hut he did was too much & he had arrived into Harris Dam hobbling in pain. Then yesterday it took him to 3pm to get into Collie. So he was off soon to get it looked at by the hospital. We had a great catch up with Kerry, once again so fortunate to have a friend help out & bring our resupply to us. Most people have to post them like Dave & Jayn, And it’s not cheap over $60 a box. We said our goodbyes again with full stomachs & settled in to our room. Well my first priority was to shower myself well. Ambles went to the physio about his knee. Turns out he will be fine! Due to his calf muscles being tight. He picked up a replacement knife to replace the one that ended up in the fire pit. Better one too – titanium lightweight! 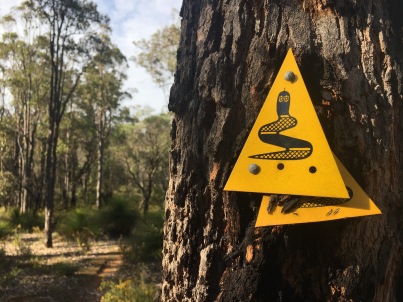 We decided to check out the Crown pub for dinner. They only had Guinness in a can so Ambles settled for that. Turns out everyone was there, Dave, Jayn, Jeremy, Deb, Mel & then Wayne not long after with his girlfriend Stacey that had driven over to surprise him. Our Tramily! We all sat around a long table drinking, eating good food & sharing stories & laughs. Was a great evening! Ambles said he was thinking of dropping the axe & wine, Jayn said that is a good idea! His body will thank him. But then he said his knee will be fine so thinks he will carry them anyway. Jayn’s look of ‘You will never learn!’ Wayne’s new plan was to hike out to the spur trail Wednesday set up his new tent there. He got a new tent & sleeping bag, Anaconda refunded him & said he could keep the old tent he wasn’t happy with. So tomorrow he will go see about his knee & head to Balingup Wednesday with us. And he doesn’t order pints of beer no! He orders jugs of beer! And he gets through them pretty well on his own! Dave offered to buy him a pint but not a jug! So we said goodbye to Jeremy, Dave & Jayn. Jeremy has finished. Dave & Jayn heading off tomorrow back on the track. Deb & Mel have their second rest day tomorrow, Daisyfish should be arriving too. We finished our evening with Ambles watching the last half hour of Australian Survivor so he was happy! Looking forward to more rest!