We 19/10: The lady at the fish n chip shop told Deb & Mel last night a cheeky short cut they could take on the way out, up the beach to Irwin Inlet cutting off 2kms. Uh, thanks but no thanks! Wonder how many hikers she suggests this to? Apparently doing this means avoiding going pass the rubbish tip. We follow the Waugal, no short cuts! We had the alarm set for 4am for a quick early getaway. Today being a 23km hike with canoe crossing & day temperatures reaching 25 degrees, we wanted to put behind many kms before the heat & snakes came out. Had off & on sleep, Ambles set up the tent close by the road so cars driving pass had their headlights on beaming into our tent. We packed inside the tent first then joined Deb & Mel at the camp kitchen for our breakfast. Then off to pack up the tent as it was light enough. The ducks came back over to supervise our pack up.😊Our tent wasn’t wet from condensation so that worked in our flavour. A lady went by on a morning walk, goes “Oooooo, are you two walking the Bibbulmun Track?!” She was excited about our trip, wished us luck & continued on not wanting to hold us up. Packing up took us over 2 hours before we got going! I was ready shy of 6am but Ambles wasn’t until 6.20am. Darn! Lost some cool hiking time. 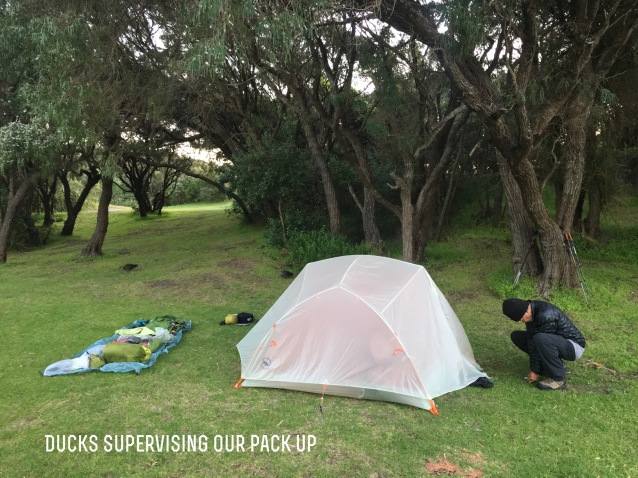 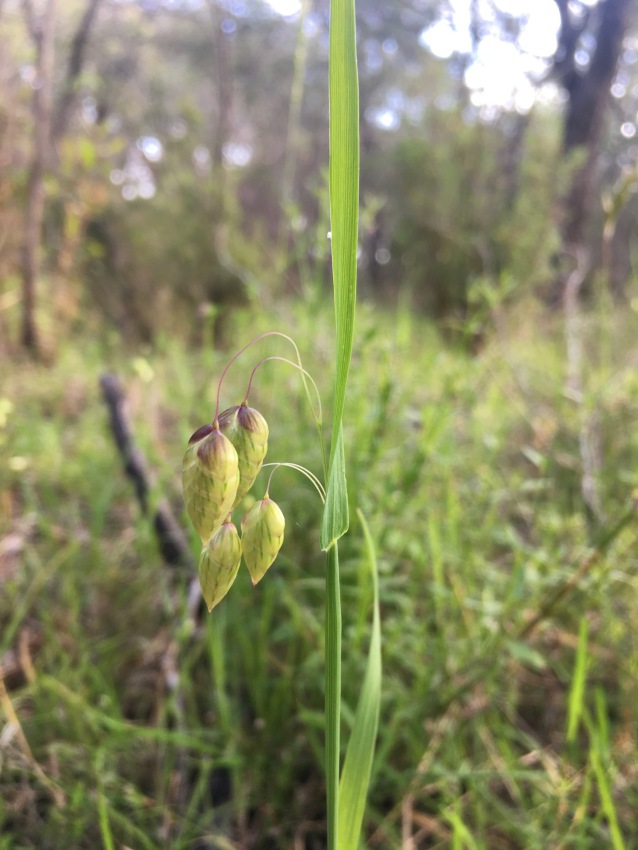 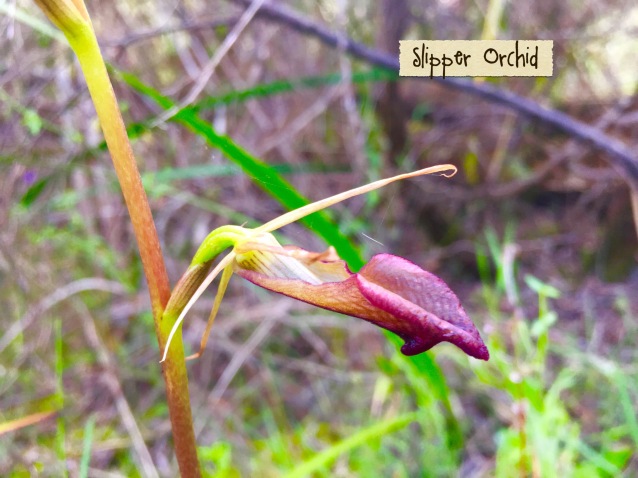 It was quite pleasant & cool when we finally set off pass the fish n chip shop, leaving Peaceful Bay behind. Not long into the walk I spotted a new Orchid! The Slipper Orchid, there was only one. I squealed in delight & started taking photos. Ambles got impatient with me & kept on walking. So I continued on slowly to still if I could spot any more, only Cowslip & Donkey Orchids. Ambles came back looking for me saying, “C’mon! We got a long day ahead of us!” So off I trotted very happy, building up speed, turned to the right – enormous huge swamp puddle. NOOOO! Deb & Mel were on the other side. Deb yells out there’s no way around it, they already wasted time looking. And they would have avoided it if they could. Mel had to stop, remove boots, socks & strapping tape on her foot, put on sandals, go across, dry feet, re-strap up foot, put socks & boots back on. A real annoyance. So after procrastinating, I stomped through, the water coming up pass my calves. Boots & socks sodden wet again! Cursed away. Ambles catches up on the other side to us now, looks & goes, “I’m not going through that!” Deb said the same thing but off he went, tried to get through the tangled condensed vegetation & trees, gave up, went back to the spot, procrastinated some more like me, with a sigh of resignation he stomped through cursing as well, slipped & almost went in the drink. Deb goes, “Well, maybe that’s why the shop owner mentioned the short cut!” So we continued as we had to with heavy wet boots now & I picked up speed, went pass the rubbish tip where rubbish had blown over the track. Passed a bunch of croaking loud frogs in the swamp. Pressed on to Irwin Inlet to the canoe crossing 7.5kms from Peaceful Bay. 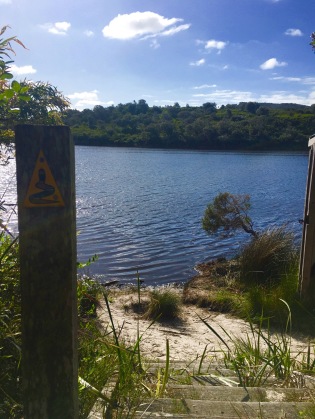 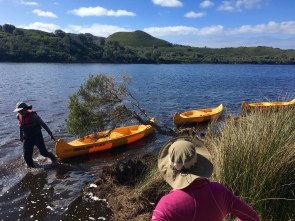 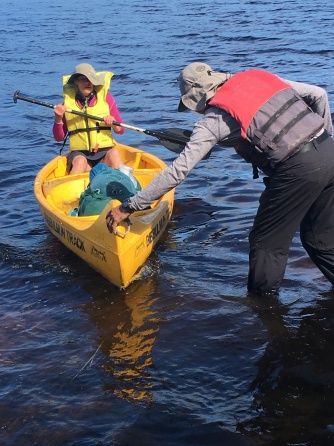 When I arrived there ahead of Ambles, I see one canoe! The other 5 on the other side! Well, not impressed! Whoever came through before us did not follow the instructions in the shed so thanks very much whoever that was!😡 So Ambles had to canoe across to the other side to bring back 2. What made it worse was the strong easterly blowing him down river coming back, he made it to the bank where I grabbed the rope & he got out in the water – well boots already wet! And walked them back up to the shed. Mel & Deb had caught up & were watching & waiting. Mel looked at the situation & was worried about making it across & keeping her boots dry. I said to Ambles to take her across, you can have 2 people or 1 person & backpack in a canoe. So Ambles rowed back over with Mel sitting in the front. I followed in another with Deb in the 3rd. It was easy to get across the winds blew me down to it, I just had to make sure I didn’t continue down the Inlet to the ocean! Once we were across, we had one backpack on the other side plus we had to leave canoes over there for the next hikers coming through. So Ambles & Deb went back across with a spare canoe each. Deb struggled against the wind getting blown down. Mel & I watched helplessly on the other side. But she made it to the other bank side, got out & walked the canoes up to the shed. Ambles had the clever idea to leave 3 canoes there which is the requirement but no one does it! He returned in one with Deb & backpack, the combined weight would have been one adult as Deb is petite & lightweight anyway.😊We were pleased. Did the right thing. Was 9.30am. We had only covered 7.8kms with still 14 odd kms to go! And now it was warm. As we left we noticed fishermen not far away in their dinghy. Must have been laughing at us!😏 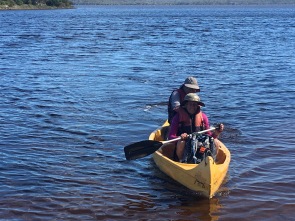 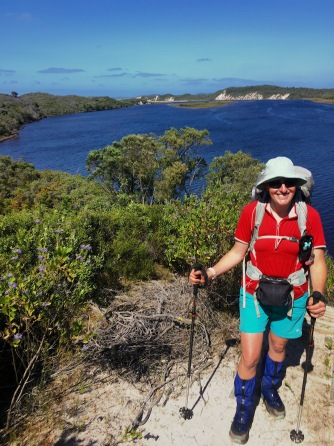 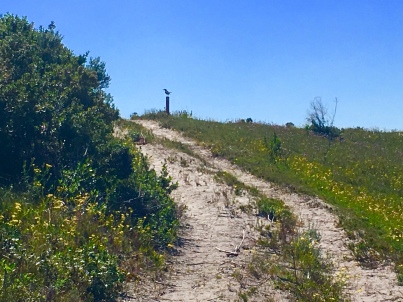 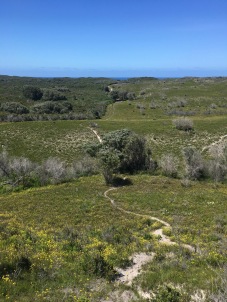 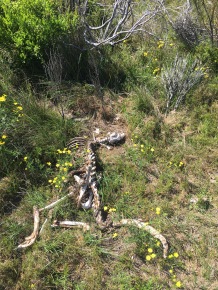 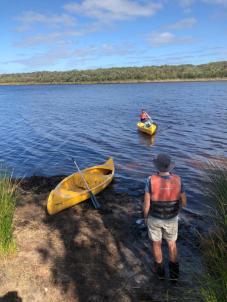 We move into an area known as the ‘Showgrounds’, the Quarram Nature Reserve. An unique interesting & picturesque scenery of rolling hills, sparsely placed trees, abundance of yellow & purple flowers. 40 odd kangaroos hopping about, the biggest red kangaroos we have seen & loads of midgees like clouds of them following us. And unrelenting sand hills, up, down, up, down. Deb & Mel stop for a break shielding faces with fly nets. Ambles gallops ahead, way ahead. I take many photos. See two complete kangaroo skeleton bone remains. I hope I don’t parish out here & join the skeletons of Quarram Reserve. Out of nowhere, a couple of big reds hop across the track in front of me, followed by an Emu! They disappear as quickly as they came. I’m getting tired in the sand but make it out onto Big Quarram Beach joining Ambles. Very low tide so easy to walk the 3kms along it, interrupted by some dune climbs in between where we take a break. I need a break. I can see why there is an alternative route inland when the beach is at high tide. You can see the waves reach up to the dunes, swallowing the sand of beach we walk along. Interesting stuff are washed up on the beach. Always a light globe? Interesting. 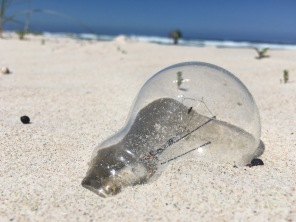 Deb & Mel catch up as we walk close together to Middle Quarram Beach. Beautiful coastline. Again I love watching the waves break & wash up the sand. It’s warm, a swim would be refreshing but we move on, leaving the beach walking behind. Beach walking is easy, firm sand. Into the sand dunes is not. Soft & hotter inside the dunes, no shade. Surprisedly no snakes. Deb & Mel stop for lunch, it’s past 12.30pm already. Still a ways to go. I struggle, getting tired. Too tired to eat but very thirsty. There’s a friggin long wooden staircase to climb. The steps go on forever. Ambles huffs & puffs louder than me. I take the lead for awhile. We continue the last 4kms, the longest 4kms. There is kangaroo poo everywhere! All over the track. The path is narrow with bushes growing in to our path. I worry about snakes but then too tired to care. It’s past lunchtime but I’m not hungry just bone weary tired. I will myself to keep moving. I have pain in my shoulders, my knees, my wet feet. Ambles takes the lead in the last 1.5kms. We arrive so grateful 2pm at the shelter! Today has been the longest, hardest day imaginable. The shelter is nestled into the valley if you walk slightly north or south of the shelter, then gorgeous views of the ocean & coastline below can be admired. Simple with a beach theme – shells hanging from the roof, another sunroom. It’s blowing cold wind into the shelter blowing stuff not tied down away. Deb & Mel make it in, relieved & happy to be here. We have a late lunch, do our chores. Neil turns up, a guy doing a small part of the walk, came from Parry Beach Campgrounds. He doesn’t have a tent & bunks in the shelter between Deb & Mel. First hiker we have seen since leaving Walpole! Deb comes back from the toilet. There’s a resident frog inside! She thought it wasn’t moving, maybe it’s not real. She touched it & it felt soft. Later when I went, it had moved to the cleaner container by the toilet, it obviously waits until nighttime to be on the move. Ambles pours wine for Deb & Mel, they don’t say no, are grateful for the wine indulgence after a hard day of 9 hours walking. So good we didn’t leave any later!😏 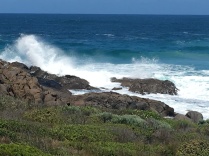 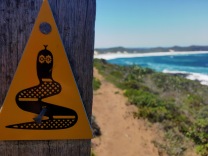 Another male hiker shows up, he has a tent & goes set up his tent outside. I don’t find out where he has come from as we get surprised……by Ambles brother, Tim & Jules! They drove & walked a short way in with food & beer for us! My face lit up, was it so good to see them or what after today! We ate, we drunk & discussed tomorrow, where we plan on spending a night camping with them at Parry’s Campgrounds. So tomorrow we pass their camp early for coffee & Jules will also have scones ready for us! Continue on to almost William Bay Campsite, 1km short of it, get picked up & taken back via Tim’s car to Parry’s. Can’t wait! It’s going to be hotter so we have to move early again, hopefully it won’t be as hard as today in the sand dunes. After they left, we had dinner but Ambles was pretty full so only had a small portion. All four of us finished off the vino as there is no need for Ambles to carry it tomorrow! Deb & Mel mentioned how it was going to be strange not having us there at the next campsite. They will miss our company! We really have become a combined group us four, Ambling Rose & the Poncho Thieves! Well, not many nights left together on the track now. In 2 nights we will be in Denmark, sort of – 20kms out of Denmark at a BnB anyway. We are all very tired, not sure why?! But it’s early bedtime tonight. I have stabs of pain going through my shoulders & need to rest. Hopefully I feel recharged in the morning.😊I doze off listening to a very tired Ambles snoring in my ear.☺️ 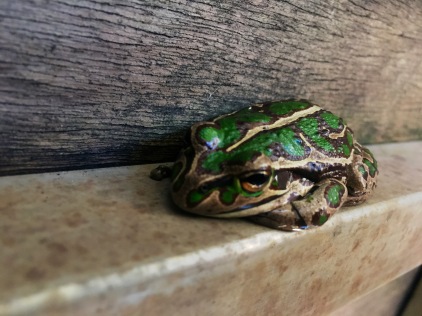 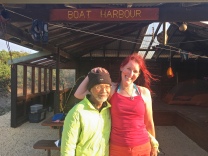 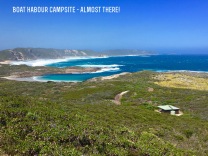 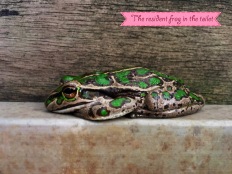 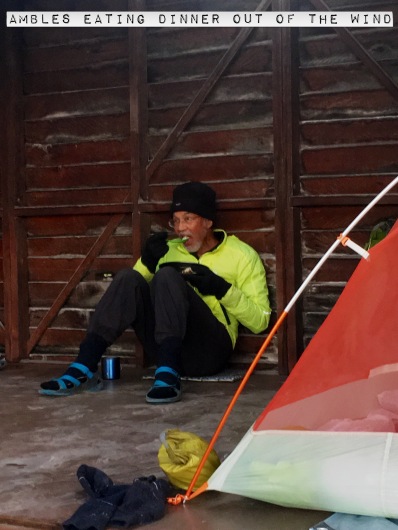