16/10: After an initial period of laying in the dark listening to the mice or bush rats scratching away in their hideaway spot behind the Bibbulmun track signage board, I drifted off to sleep until 2am. The rain came pouring down outside, so convenient while we are snug warm & dry in our beds! Then I slept on & off until 5am. Today was a mere 15kms, some ups & downs but nothing too bad. The morning was humid & cool. No rain forecasted but cloudy skies. We set off after Deb & Mel still getting back into our hiking groove. 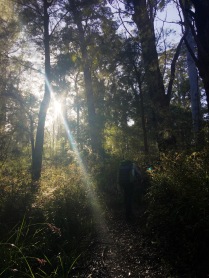 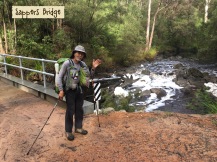 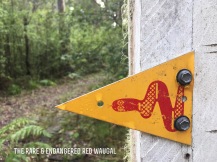 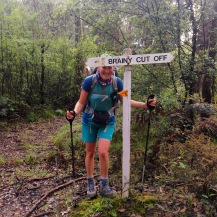 Wasn’t much to talk about, more of the same like yesterday, Karri & big impressive Tingle trees, small flowing creeks, many little bridges, hardly any flowers. We were coming up to the Tree Top Walk, could hear cars close by zipping along the highway. I chanced upon a cute little creature that was sitting in the middle of the path. I couldn’t figure what it was but later decided it must be a quokka as it looked like one, just slightly bigger than the Rottnest Island ones & they are known to live around this area. Fat little critter with reddish brown short fur & tiny pointy ears. It looked at me & scampered into the bush. I walked along to where it had been sitting & saw it in the bush, eyed me off a second time then disappeared before I could get a photo of it. We arrived outside the Tree Top Walk close to 11am. The Bibbulmun runs right pass the entrance. And there’s a coffee van every day to 3pm. Ambles was hanging out for a cappuccino so he promptly ordered one, I had a Chai latte. I wasn’t hungry for sweets but that was all they served. Ambles wanted a coconut slice, ordered two thinking they were small pieces & he would eat both. But they were huge so gave me one to eat. Well I was all sugared out after that! Once we stopped, the chill set in. It was so cold sitting in my shorts & t-shirt! We looked odd amongst all the tourists that were turning up fully rugged up. A whole bus load of people came in. One guy walked pass me & said, “You want my jacket?!!” I heard someone else mention ‘that lady is only in shorts & a top!’ So quickly pulled out my puffer jacket. The lady inside the centre remarked on my jacket, “Wow! Hello lady in the bright colour jacket! That’s like those high vis for sure!” We became celebrities when an older couple sat close by. The woman started asking questions, I told her about our walk, how long we had been walking & where we were finishing. She was so amazed, so impressed, telling her husband & their friends about us. There is 2 types of people, those that are excited about what you are doing & those that stare at you like you have gone mad, you are not part of society or the human race anymore.😆 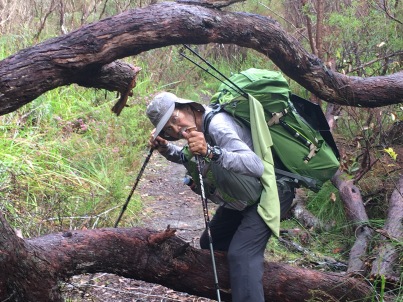 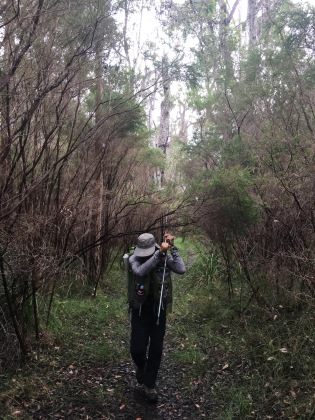 Ambles didn’t want to do the tree top walk, we had come here years before in a car😊. So different coming into these same places on foot! I tipped out our rubbish bag which is so satisfying before we went around looking for the south exit of the track, walking through the car parks looking lost until we found the trail head. Then it was only 1.5kms to Giants. We were a lot slower again with lengthy breaks but still got to camp just after midday. Deb & Mel heard me coming long before seeing me as my little bell rang away loudly coming down the descent into camp. “We can hear you!” Calls out Deb. Mel looked happy, had a better walk today, less pain. Deb was keen to walk back & do the tree top walk so after our lunch, I joined her & we set off back down the track. Going in the afternoon was far better, it was warmer & not many tourists around. The tree top walk is suspended up to 50 metres above ground, most of the trees still tower above us, but it’s pretty cool looking at trees from above & not the ground. We also did the Ancient Empire walk & learnt the difference between tree types. Had a refreshing juice drink & made our way back to camp. A fun way to kill some time in the afternoon. Got back where Ambles was worried as we had been gone almost 2 hours.😆Almost was going to go back looking for us – yeah right! I spotted a Quokka & he had spotted green poop on the ground shaped like a human fist. He was so impressed with this find, he took a photo. Yeah…. no one wants to see it!😂 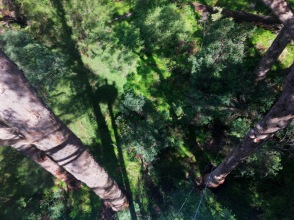 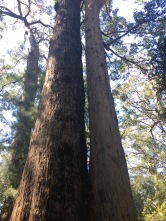 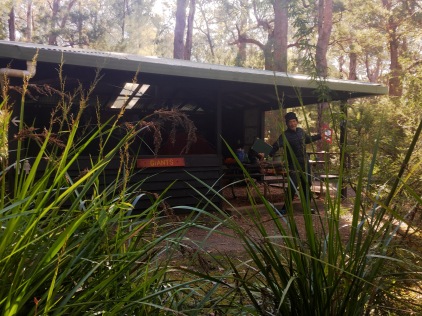 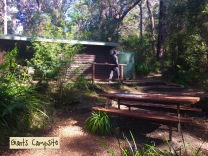 He offered Deb whiskey again tonight, last night she said no, today she said no again. Mel piped up from her tent, “I wouldn’t mind a whiskey! I can finally use my shot glass!” (Mel has a sea to summit collapsible shot size cup which is so unbearably cute!) So then Deb succumbed to having one as well. With news that Dave & Jayne finished in Albany today, we clinked our whiskey cups in celebration for them. Ambles entertained us all as we sat down just the 4 of us again for dinner at our cosy campsite. Isn’t much of a glamorous shelter but has ample tent sites all around the shelter. A standard Deep South design shelter with wood chip flooring. Unlike the last shelter, this one has heaps of hanging hooks, ropes with pegs even! I heard something big crashing through the bushes close by but was after dark. Can feel a little unnerving not knowing what is out there in the bush. It’s definitely colder than last night as we tucked ourselves into our sleeping bags. Ambles been talking with his youngest brother & looks like we will get to catch up soon before Denmark on the track so really looking forward to catching up with family. It is always good to have something like meeting friends & family to look forward to. Breaks up the normality of day to day life on the track. Ambles has already put in his food order to his brother & is excited😊. Time for shut eye. 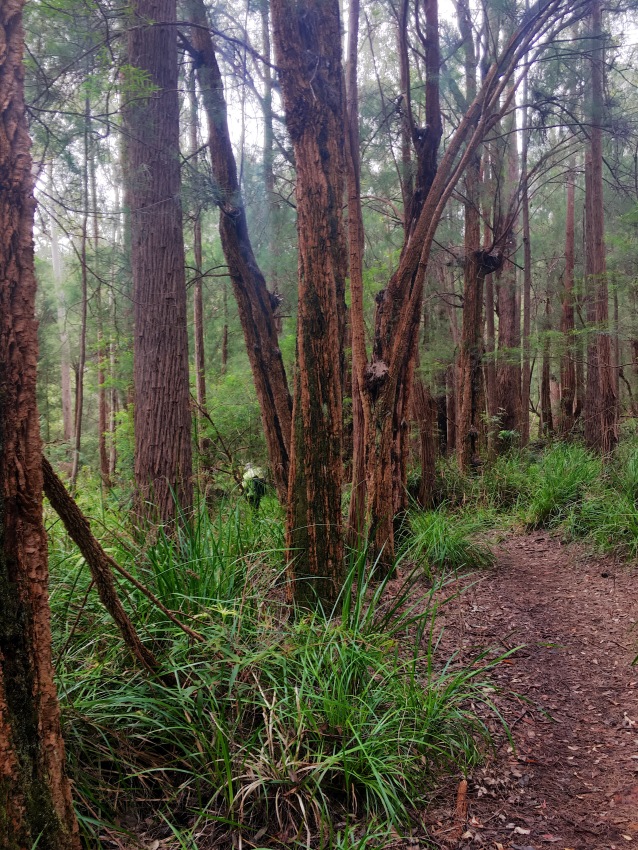 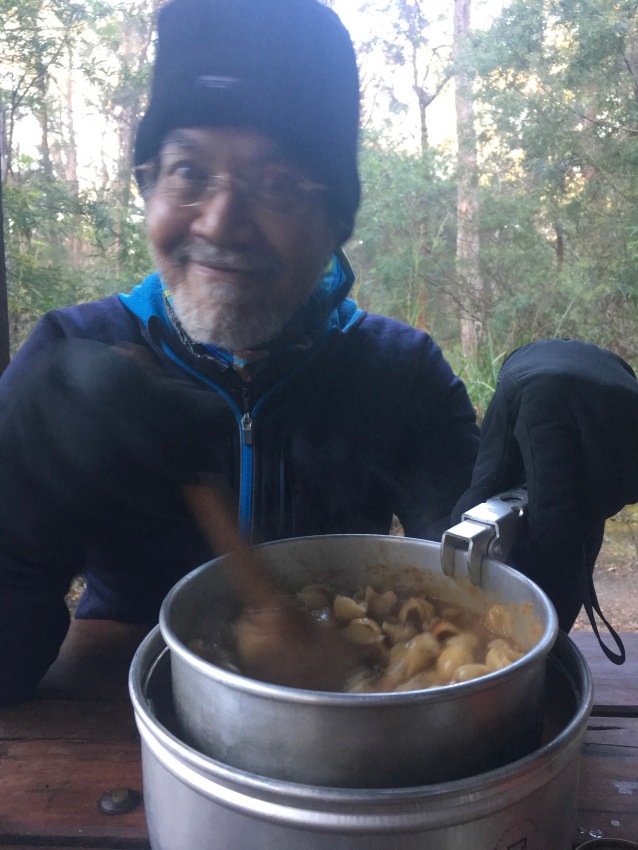