6/10: As always, first night in a trail town, sleep does not come easy, despite a proper bed & soft pillows. Hollowbutt Cafe is the only place to get breakfast & it opens at 8am, however Drew said someone is there at 7.30am & will let hikers in early for breakfast. So we had a lay in before packing up our gear & heading down to the cafe. It was after 7.30am, Mel & Deb were already there waiting outside. Ambles was like, “I can’t be bothered waiting around, I’m just going to start walking!” I said, “Alright, see you later!” But then Drew & Ray came down & opened the door which was unlocked, asked the lady by herself inside & she said we could all come in. So grabbed us a long table to all sit at & order big hearty cooked breakfast’s. Today was a pretty easy 15.2kms to Gardner shelter, mostly flat with short little hills, nothing compared to what hills we had hiked over already. We left at almost 9am, briefly chatting to a man riding the Mundi Biddi to Albany, leaving town along the old disused railway track. This section was spectacular with wildflowers. So many colours, new wildflowers to look at. And so lush & green. 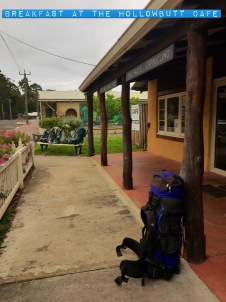 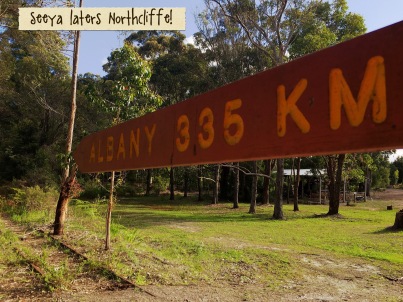 The track out seem to take us around in circles before leading us out alongside the Gardner river. There were some swampy muddy patches but easy to get around & not too bad. We hear there is much worse ahead up to the knees even in places! So I wear my gaiters now, for the wading in swamp holes & for snakes. Some of the way is now on soft white sand indicating the change soon to the ocean & beaches. I find the sand already tiring & it’s not that bad! Ambles new found walking pace has finally achieved in us walking a similar pace & being not far apart now. I spotted a big sized black cat on the track, it hadn’t noticed us as it was busy burying its poop in the sand right in the middle of the track. Finally it was satisfied, cotton on to our presence & shot off like a rocket into the bush. Ambles left me a love note in the dirt at one point while I was taking photos. It was hopeless stopping for a break, the mozzies were quick to find my exposed limbs for a feed. Ambles was ahead of me & decided to rest his backpack on one of the red posts with the Waugal markers. The post was barely in the ground & fell over. So I came across Ambles scratching his head, trying to correct the post but the track broke into 2 directions & he was like, “Which way we go?” I checked Guthook & as we cross a bridge in 100 metres, picked the path going to the river, rearranging the post so the markers point the correct way, I had picked the correct path. 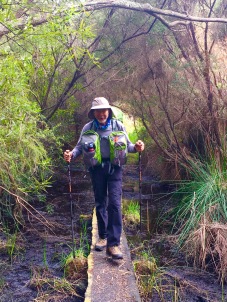 This whole area still in forest was severely burnt in 2015 by a pretty nasty big bushfire. It has regenerated well & you wouldn’t really know. The old Gardner shelter was destroyed as well as 40 odd kms of the Bibbulmun track burnt out. The rebuild again same as Possum Springs & Brookton with the rammed earth design & ample toilet space to change in. Quite like this style actually! Just 2kms from the shelter we passed Ray & Drew just lounging on the side of the track, eating their lunch. Was a perfect day for walking, not hot, coolish temperature. My snake avoidance luck had run out, first spotting the tail end of a black snake slithering into the bushes by the track, then less than 20 feet further on, was startled by the sight of another snake, this one a tiger snake, quickly slithering off the track as well into the bush. Then I had those cute little birds that I don’t mind at all, making sure I continued pass their nests. Supervising my progress along the track. Arrived by 1pm as Deb & Mel were settling down for lunch. They had forgot their block of cheese & salami they left behind in the motel room which was for their lunches to Walpole. That made me realise I had left my collection of small butters in our motel room fridge – damn, damn, damn!

We settled for lunch & Ambles decided he wasn’t putting up with all the mozzies & march flies & strung up the ZPacks tent, the first time we are using it, in the shelter. The Gardner river runs beneath the campsite but didn’t look too good for swimming, the banks deep, overgrown with bushes & slippery. So gave it a miss. There is a log right across one side to the other & I imagined there would be some daredevils seeing if they can walk across & not fall in. Yeah, wasn’t gonna try that either! We had us, Ray, Drew, Deb & Mel. Daisyfish came in at 4pm followed shortly after by another thur hiker. He walked briskly into camp no worries, having doubled from Schafer today. A Dutch guy calling himself Birdman, as it turns out he is an avid bird watcher with a hefty set of binoculars. I think as he walks alone, he gets into camp, sees people & starts talking, & once he starts, he don’t stop! Deb had asked him what birds he had seen on the Larapinta trail this year as she had also walked the trail before the Bibbulmun. So Birdman went to get his notepad & started rattling off a long list of bird names from his notepad on birds he saw on the Larapinta trail. He waffled on for 5 minutes at least! Deb looked at me saying, “I wish I hadn’t asked now!” By the end of the list, Deb goes, “Wow! I think I didn’t see even a quarter of those birds!”

Today’s box in the shelter contained a surfing magazine that Sandals enjoyed reading yesterday as he loves surfing & he had the campsite to himself. He has changed from walking the length in 25 days to 40 days. He must have made an error & put his age down twice before. Also there is a James Herriot Vets Might Fly book, an opened packet of milk powder, a big empty gas canister, an empty jar & hanging above a made bow of a curved stick & rope with no archer. We had dinner & enjoyed the campfire that Drew got going with Deb fetching more firewood for. Everyone seems to go to bed earlier & earlier now by 6.15pm! Not us, we stayed up longer enjoying our 3rd last campfire. Really enjoying my Luci light now, reading my book no longer by my head torch.😊