3/10: I decided on a late start & a leisurely 22km stroll to Warren. Ambles was the opposite, he got up 5am, had the usual porridge & coffee for breakfast & left just shy of 7am. I stayed in bed until 6.45am, got up, dressed & went downstairs for breakfast. Had 2 freshly baked huge croissants with jam & butter. Left the Pemberton hotel by 8.10am making my way back up the street & to the Gloucester tree again. Felt harder this time with a full pack. It was humid & overcast with a slight drizzle. There were cyclists at the tree, this time I walked on pass & headed down the track. 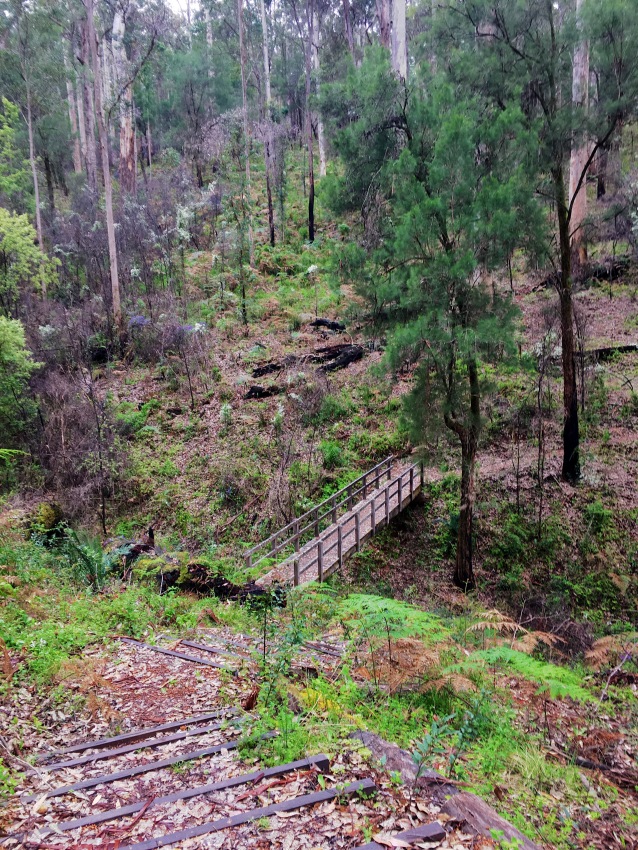 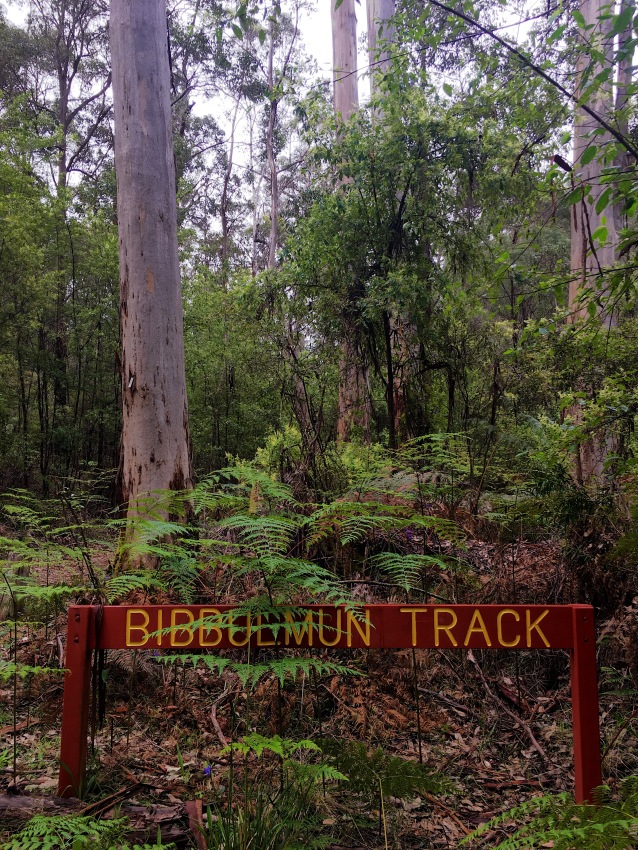 I know it was forecasted to rain hard tomorrow so wanted to enjoy & take lots of photos today. I really enjoyed being back in the forest with the Karri trees. There is so much beauty out here. The birds were out in force, so many varieties of birds singing to each other. Ambles was thinking as he was going slow, I would catch up. But that never happened, I walked alone the whole way, meeting only a family returning to Pemberton from Warren Campsite. The track weaves out of town but back on itself, you aren’t out of town really for the first 6 odd kms. I took the 300 metres detour to the gorgeous Cascades on the Lefroy Brook. Had a quick 20 minute side detour then was back on my way enjoying those pimply up & down hills. Ha! Wasn’t really, body had gone soft with 2 days rest, felt like those small inclines were hard work! 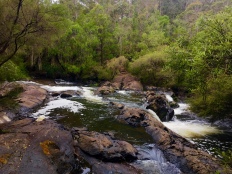 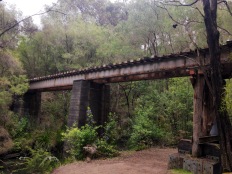 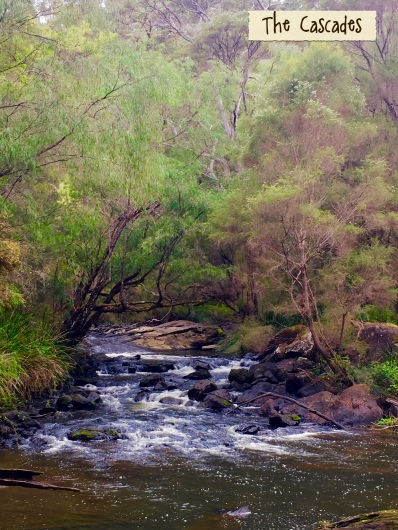 I thought soon, we will be leaving it all behind these tree forests for the flat plains, took my time enjoying every part of the track searching for Orchids but not finding any, now it was 12.30pm still nowhere near the shelter. You think a lot when you walk alone. I only had to take out my umbrella once briefly, the rain held off today which was nice. Took my second break enjoying my cream donut from the Bakery yesterday. Still had Ambles Custard Tart that was getting squished in my backpack. But he didn’t want to carry it himself. The last couple of kilometres saw me walking along a flat but beautiful old rail formation. The last kilometre again no surprise was a steady uphill incline as Warren Campsite sits up on top overlooking the valley. I had arrived after 2pm, really took my time! Deb, Mel, Ambles & 2 guys were all there resting. I was last in to camp! Ambles had eaten his noodles so I didn’t bother getting lunch, had a cuppa & wandered down to the old River Road trestle bridge which is another 1.6kms south but was worried I would miss getting photos tomorrow if it is raining heavily. A quick walk there & back took less than an hour, the wooden planks disintegrating, parts breaking off here & there. Ambles had got a fire going with the firewood & axe already supplied, lucky he had dropped his own axe, sending it back home with his big knife. Backpack is slightly lighter now😁. He had done alright, but still coughing, still feeling unwell. He wasn’t impressed I had got him a custard tart yesterday that had to go in the fridge, which meant the fridge had to be turned on making it’s hilarious sound all night. He still ate his custard tart amongst the grumbles.😆

The box containing the log trail book is packed full of reading material. We have a Readers Digest from 1988 the print font is so large! Who magazine which surprisedly is quite recent from August this year, a pile of friction books, a file book on bushfires in WA with pictures to make you feel comfortable in the bush & an old sad looking twirl chocolate bar still in its wrapper. The fire pit has seen better days. The walls are crumbling & the iron cooking tray & billy holder are missing in action. Still holds a fire which is the main thing!

Mel was nursing two sore feet now in her bed while Deb enjoys the warmth from the campfire. I’m not familiar with the new guys yet, they are Ray & Drew from Sydney in their late 60’s end to ending to Albany, well Drew is, Ray joined him at Balingup & they are scheduled to finish on the 26th of October same as Deb, Mel, Daisyfish & possibly us if we have another extra rest day. It was a pretty quiet night, I know I was tired, everyone else wasn’t interested in staying up either. We can crawl into our sleeping bags & listen for the rain when it comes. So 6.30pm everyone retired to the sounds of Kookaburras, other birds chatting goodnight, an owl & the wind picking up, blowing through the trees.