We had stayed up to 8pm last night! Way pass ‘hiker bedtime’. Most people had disappeared into their sleeping bags by 6.30pm. Us, Walking bushie, Mark & his son Scully all hung around the warm campfire chatting away. Walking bushie kept wanting to see a Salsa dance demo from us & Ambles found out a lot about her. When you meet someone on the track, after 10 minutes, they tell you their whole life story. Well, Walking bushie told us a lot about building her own house on top of a hill (Mont Blanc) in Switzerland to falling down a gorge last year, breaking her shoulder & having to climb out with her 30kg backpack to survive. She is a wild & free spirited eccentric person always traveling & hiking somewhere in the world. Ambles enjoyed chatting to Mark & Scully, they helped take over on the campfire when Ambles was tired & got it going again in the morning. They like to play a game as they hike – guess what person bootprints on the track belong to. For Walking Bushie, they assumed a fast pace middle aged man. Very close guess, but she fooled them as she wears men’s hiking boots. It bucketed down again with rain during the night. Ambles & I got up 4am for the toilet dash & the narrow path had already flooded from the rain. We saw Walking bushie’s tent floating somewhere out there on a lake😁. Just jokes. But I had another sore throat & was moaning all night. I was even aware of my moaning sounds. Ambles would tap me telling me I’m moaning loudly. I would turn over, start moaning even louder. He said it sounded more like a pleasurable moan – I wish! The guys in camp were giving Ambles funny looks in the morning 😉. 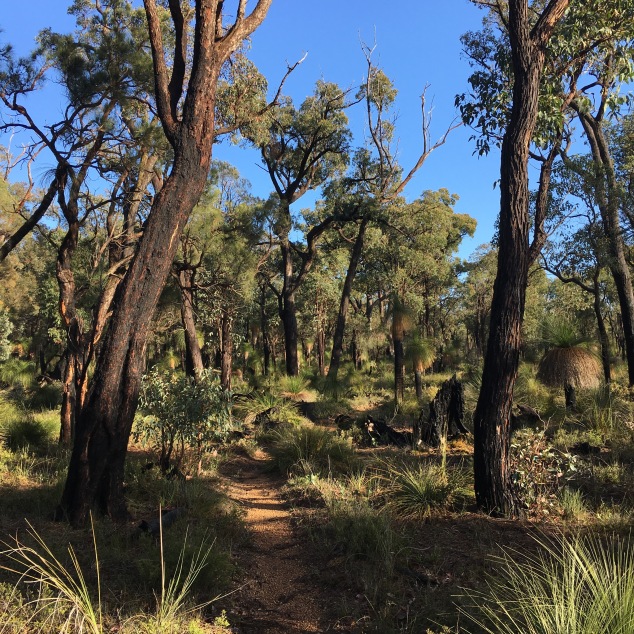 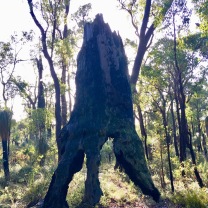 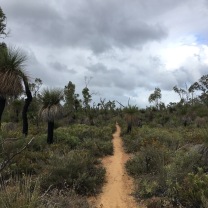 Walking bushie was telling Ambles over n over, “You gotta lose that axe darling! You carrying too much weight!” She had given us lots of tips for further south. And Oil Pulling with coconut oil instead of brushing your teeth with a toothbrush & toothpaste. She swore by it. Then she gave me a big hug goodbye saying, “Look after him won’t you darling?” Ambles was upset not to get a hug from her, but a bit hard with his big booby front packs on! We headed south, along with the Essendon Bushwalking club from Melbourne. We found out they were 4 friends out on a 4 week hike from Kalamunda to Pemberton. The one guy in the group called Laurie was a little on the heavy side & not as fit as his female counterparts. They soon overtook us, but caught up with them at Brookton Shelter where they were lounging around, having morning tea. Brookton Shelter is only 8 kms from Mount Dale, I had decided when I did the planning to skip this one & double hut to Canning Campsite, 19.5kms in total. Ambles pretended he had no idea I had planned this thinking we were single hutting & stopping at Brookton. So he wasn’t happy about that! But really, it was flat mostly & took us 2 hours & 10 minutes arriving at 10am. Ambles said his scholl was helping his ‘Tataa’ problem in his left foot. Also finding an excerise when the pain flared up helped too. 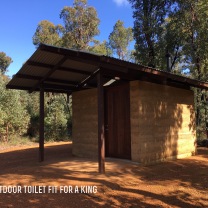 The day was hot & cold, not making its mind up. I stayed rugged up as when the sun disappeared, the breeze was quite cold. I was feeling very lacklustre for energy due to my sore throat & moaning all night. My body felt lethargic but I was always ahead of Ambles by 10 minutes or so. Ambles looked bone weary from lack of sleep, looked over at me saying, “Man, I could really do with a hot shower right about now!” We crossed Brookton Hwy, passed quite a few cars belonging to day hikers or ‘weekend warriors’ doing an overnighter I was guessing. On the way up hill, 2 guys taking turns carrying a baby looking tired for it went pass, followed by their respective female partners in tow. Then there was this older couple just out walking their border collie. Ambles couldn’t find the energy to tell them that their dog is not allowed on the Bibbulmun Track. They look like they do it all the time.

Ambles discovered a few days ago he was using his fire lint all wrong when he saw the word UP on one side, he goes, “No wonder I had trouble lighting my stove! I was using it the wrong way!” I have the Bibbulmun Track on my Guthook app not realising it works when you press the red button with GPS on it, goes to green & shows where you are & how far the next point of interest or Campsite is – duh! So now I have discovered that, I can plan our stops using it, deciding that Abyssinia Rock would be perfect for lunch & we should get there by lunchtime. I got there 12.20pm & set out my presoaked cous cous for lunch. I was feeling quite pleased with my ingenious food preparations for this voyage yet again. Ambles showed up 10 minutes later where we enjoyed our nice little lunch, no cuppa tea as the Shelter was only 4kms away, we were eager to just get there. Ambles feet were hurting so he took off his shoes & socks, soaking them in the nearby flowing cold water stream.

The last kms were tough, I had to push myself along, checking on Guthook as to how much further I had to go. There was a short paperbark swamp area that I enjoyed going through. I got into an empty Canning Campsite at 2.30pm with Ambles arriving 10 minutes later. With no one there, I quickly took advantage of a full body wash with my towel. The water was cold, the temperature outside was cold but I enjoyed my sneaky naked wash down. My blotchy rash didn’t like the big kms today & were angry red as I lathered more cream into them. My head is itchy, my hair needs a wash badly, but I chuck on a beanie or buff & pretend there’s no issue there! I did some clothes washing knowing it was too cool for them to dry properly. Ambles was out getting a campfire going again when the Melbourne group turned up an hour later. Laurie was looking exhausted compared to the 3 women. But they all talked about double hutting tomorrow. That sounded like a killer to me & Laurie wasn’t looking too keen on the idea. The older shorter woman called Sylvia is very chatty, bossy & chatty – did I already mention that?!

Rain was meant to come in at 5pm. No rain did but & the campfire was awesome. We had my home cooked savoury mince for dinner with our red wine – was perfect! The group stayed to themselves not even wanting to enjoy the campfire. They went to bed at 7pm, I tried staying up as I dreaded another night of moaning & not able to sleep. But was so tired. After cuddling up with Ambles by the fire, we headed off to bed at 7.30pm. No one else came, I guess the bad weather put off those weekend hikers.