Well! That was the best sleep I had on the Track so far! I didn’t have to get up & pee either! Slept like a baby. Felt so much better when I woke up. It was 5.15am, we decided to get up & moving early. The rains were predicted between 10am & 4pm so we wanted to get some kms under our belt before the rain started. Ambles was surprised I didn’t make any more moans. Lucky, otherwise our trail name would have changed to ‘Ambling Mona’ Today was going to be an almost 16km hike to the next shelter which was long enough after yesterday. The Melbourne group also got up as soon as we were pottering around getting breakfast. The toilet there stunk pretty bad I have to say the smelliest toilet so far on track. We left the group & the Shelter at 7.15am. 2 hours it takes us to get ready.

The start of the walk was very pleasant. I couldn’t believe the forecast of rain. The sun was out & the birds chirping. An easy stroll along to Canning River where I had used my Guthook, decided to have a short rest & my breakfast bar there. The weather started to turn, clouds coming over, rain threatening to unleash itself on us. I had stopped 5 minutes there when the Melbourne group came through with Ambles in tow. Sylvia must have been talking his ear off & said, “There she is! Wasn’t too far ahead of you!” They stopped for a break, Ambles decided to continue as there was a slogfest to come up the hill. And it started to rain! 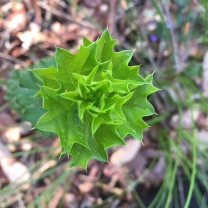 Rain it did through the rest of the walk. Stopping momentarily with the sun emerging to tease us before disappearing & more heavier rain beating down on us. Heads bent down hiding under our umbrellas in such miserable weather, checking the Guthook app every 5 minutes to see when the hell we would get to the Campsite. I was feeling good, but the rain drained my spirit & energy. It sure felt great to see the hut sign come up.

The Melbourne group were under the Shelter, spread out over the table, their gear everywhere. They said two trail runners had just left. They wanted to train in wet weather.🤔 Laurie had suffered a fall in the rain with scrapes & dried blood on his face. They quickly headed off, deciding to double hut to the next shelter. Craziness. Two of the women decided to take the Bibbulmun Track over the two hills (WA mountains) while Laurie & Sylvia took to backtracking, going out to Albany Hwy up to Sullivan Rock & back in. They didn’t look too enthused as they left back out into the rain & cold, making it a 30 odd km day. Can’t stay I was sad to see them go. Laurie was nice, Sylvia was chef commander & was trying to order Ambles around. Did I also mention she is way too chatty?!! Haha, jokes aside, the group wasn’t too bad. We enjoyed lunch & two lots of hot cuppas before relaxing in our sleeping bags. Ambles even got a snooze in. It was too cold & raining to do anything else. My nasty red rash had spread all over my right foot to my dismay as I smothered more cream on them.

It was after 4pm & the rain had stopped. Ambles was out there building another campfire with wet sticks & logs. Managed to get it going, he was called ‘firelord’ once for a reason! I ventured off for a walk & discovered the secret entrance to the spur trail up to Mount Randall summit. Not too much of a climb, but at the top the most amazing views of Mt Cuthbert & Mt Vincent we go over tomorrow & in the distance Mt Cooke. And to top it off – happened to still have a rainbow in the sky. The BTF had advised at Mount Dale & Monadnocks that the shitters were full. I can advise they have been emptied & smell alright for a drop toilet that they are. 😏 We had the Shelter to ourselves until almost 6pm – heard some shouting & not long after emerged two young hikers that came from Brookton Shelter. They did a big mileage day in the rain. The guy quickly asked, “Are you Ambling Rose?” I’ve been writing in not only the trail register, but the Shelter book that people tend to draw pictures in, write poems or carry on about their day. These two weren’t together, they started separately but met each other & been hiking together since then. Maybe a romance blossoming? The guy, called Tristan, is loud, a real jokester. Said he met Simone, the woman with him, was love at first sight, she wanted to stick with him & today she proposed to him or so he thought – hahaha. He plans to get to Northcliffe, see how he feels. He carries a 25 to 30kg backpack with 3 course meals. Simone is from Melbourne, she did the Bibbulmun Track two years ago, came back with the plan of yo-yoing this time. We just sat quietly enjoying our campfire until we were too tired & went to bed. Plus & minus more rain showers.