This morning was a lazy one. We stayed under the bed covers cosy & warm well past 7am. It was very windy & cold outside. Our cabin had red splatters on the walls & Mr D was alarmed at this going, “What are these marks? They look like blood splatters!” We saw Jordan march on by pass our cabin at 8.16am with his backpack, starting his final day of hiking the track. He would probably get to Cape Leeuwin by lunchtime at his speed! We took our time having breakfast & then packing up. It was after 9am by the time we left. Claire was packing up her car so we went over to thank her once again for the drinks, food & wish her well. Off we went with only 10.5kms to our Campsite. 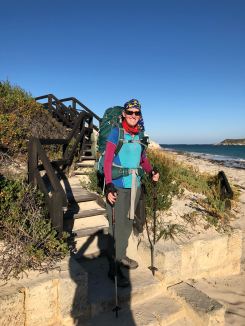 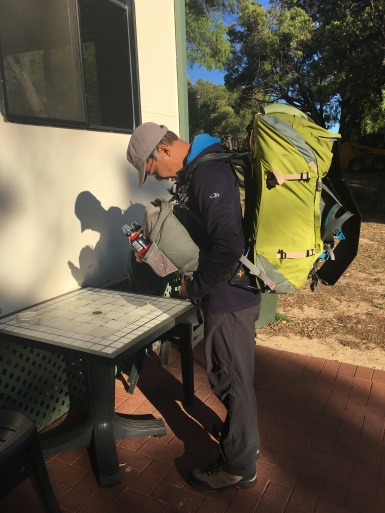 We had a small amount of beach walking to start, passing a fisherman setting up his rods. Then the track went back inland, along narrow sandy trails, up, down, around the bend, up, up, around a bend. On it went for awhile. I spotted a huge kangaroo further along but had vanished by the time I had reached it’s spot. The wind had died down but it was starting to feel hot again. Most of the track is very exposed to the elements, the sand makes it feel so much warmer. I changed into shorts waiting for Mr D at Mozzie Seat. I named it that as the mozzies were ruthless there & I had to move on & wait somewhere mozzie free. Mr D had been dealing with pain in his hip, this was causing him some bother. 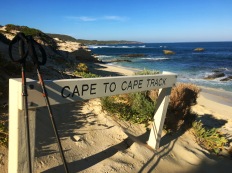 At the Foul Bay Lighthouse I waited for Mr D to catch up. Then off we continued, though he had to stop & check his work emails as some phone signal came through didn’t he! We skipped the coastal part called Cosy Corner as the track stays inland using a 4WD track to get back onto the coast after Cosy Corner. The views here are again beautiful. We navigate a rock platform for a bit – they are full of small solution holes that when there is enough swell, they blow out water like mini blowholes. You can hear the water rushing in underneath you through the holes. Such a fascinating spot indeed. I spotted many little crabs down them. The swell wasn’t big today & only saw a few smaller water expulsions from some. Indeed it would be amazing & you would get wet certainly if they were going in full force.

After spending too long there, I continued to catch up with Mr D. There we had to skirt around big boulders & rocks, through more soft sand & around Cape Hamelin & onto Deepdene Beach. This is where you first sight the goal – Cape Leeuwin & a tiny, tiny lighthouse! Almost there! Very exciting! We continued not far along the beach before coming to the sign for Deepdene Campsite. Then it was a 500 meter detour in through the sand dunes & just behind them. The Campsite has two nice grassy spots with a table in each to set up tents with the toilet & water tank just off to the right up a small incline. 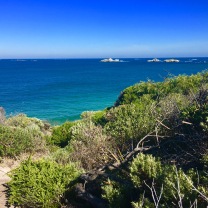 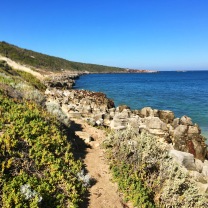 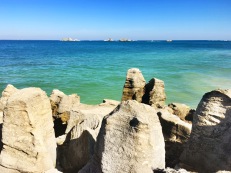 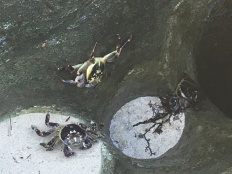 It was just about 1pm so excellent timing. Even through it was a short day, we were still tired from yesterday. It was hot in the sun. Was good to stop for the day. We tried the pasta packet I got from reception yesterday. Added boiled water & milk powder & left it to cook in Mr D’s cookware creation he had made. In 20 minutes the pasta was cooked enough & it actually tasted good & filled us up. We used some of the corn thins I had got as well to soak up the juice. We set up the tent & spent the afternoon lazing away, resting in the tent or sitting at the table. While I was sitting at the table mid afternoon reading the track bible book as there wasn’t anything else to read, I happened to look up & a long brown snake was heading over to me. The snake quickly retreated back into the bushes as it sensed I had seen it. For the rest of our stay, I kept a wary eye at the spot in case it came out again, but it didn’t. So we had one snake sighting each. Jordan had seen a few almost got a bite from one as he came up suddenly on the snake on the track. He quickly hopped over the snake as it lashed out at him through fright at his sudden appearance. Another good reason to walk slower so they have ample time to slither away! 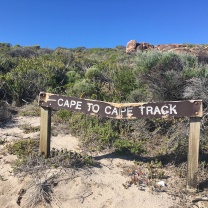 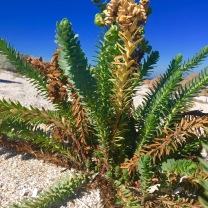 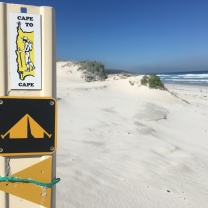 We enjoyed another backcountry meal as Mr D’s fishing rod he had carried all this way never got used. The aspects of catching a fresh fish for dinner not to be. And for the only night on this whole walk, we had an alcohol free night. So once dinner was done & I had a hot chocolate drink, there was nothing else to do but go to bed. We couldn’t light a campfire & there was no one else there to talk to. By 6.30pm it was dark, it felt like 9pm. So we settled into our sleeping bags, all excited for our last day out on the C2C tomorrow. We had been walking continuously with no rest days. The constant day in, day out of sand walking & rock hopping was wearing us out & we were happy to finish now. 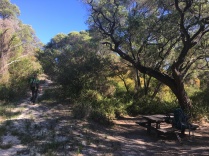 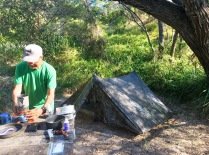