Cat Empires ‘Two Shoes’ started playing at 5am this morning. Mr D wanted a new alarm sound but I had insisted on the same song, it has become like a theme song to our walk! We wanted to get going nice & early & we had finally got into our groove with packing up our camping spot. Even had packing up the tent spot on, neatly folded & put away. Lucky I had bought along enough porridge for the whole trip. There was no resupply of it along the way. Mr D finished off his two coffee bags – that’s it, our walk had to end now! Due to a lot of prescribed burns happening in the south west, there was a lot of smoke again at this campsite.

We set off just after 7am, heading back to the beach. We had a 7km stretch again mostly on sand. I was glad we were going early morning while it was still cool & pleasant. Mr D got into a mindset of “Ok, this is going to take 3 hours” & away he went. The bible guide book warns this section is for fit & self sufficient walkers as is difficult. By now we should be fit enough. The walk wasn’t too bad, a soft plod along. A guy went by in his quad bike with his dog enjoying the ride sitting in the attached trailer. I was well in front again & ended up catching up to the guy on the quad whom had stopped further up the beach & was fishing. He caught a nice big Salmon as I went by, his dog running around all excited. I waited beyond him for Mr D, whom when he reached the fisherman, stopped to have a chat. “What do you have in that big backpack?” The Fisherman asked, “A kitchen sink?!” The man was actually after Mulloway. The beauty of walking the track was knowing all the good fishing & surfing spots. 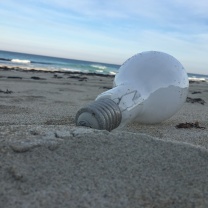 We came to another rocky platform stretch like yesterday. But there wasn’t blow holes just sharp jagged rocks with big gaps between them. One had to watch their step, it could be easy to fall into a hole. Mr D thought I had fallen into one when he couldn’t see me ahead. I thought he had fallen into one as I waited & waited for him to appear into view. We made it through in one piece, passed through more sand & big limestone rocks then up a couple of big sand dunes. We had made good time, stopping at 10am for a short break inside the sand dunes. Mr D said he was trying to walk fast but his knee would start hurting so he had to slow down. 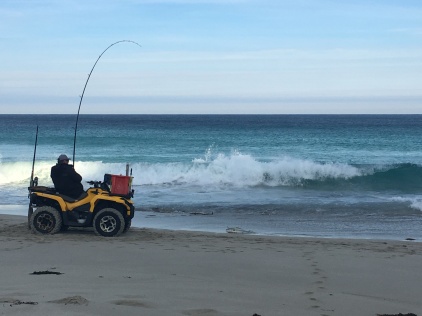 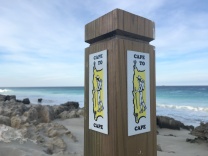 The day was warming up now as we followed the track that went inwards along narrow trails protected by the sun with lots of trees & vegetation. The walking was easier. At times we would glimpse a view of the lighthouse, it still looked far away. I spooked one big bird that in turn spooked me & flew off a tree branch suddenly inches from my face. We stopped when we finally came to a seat bench above skippy rock. The only problem it was hot there with not much shade but unfortunately the undercover track had nowhere to stop & sit down. Mr D was feeling hot & needed a break from his backpack & the sun. So we had our other lunch – tuna on corn thins. Pretty ordinary lunch, & our last cuppa on the track. We only had 3kms left as we set off again, the path winding downwards until we reached the southern registration station. There were 3 pens at this one as Mr D registered our names in the book.

The path soon lead out to Quarry Bay, negotiating some more rocks along the way. That last bit at Quarry Bay was something else! There was heaps of seaweed buildup, wet slippery rocks that poke out here & there above all the seaweed & water. In fact, if you missed a rock, your boot would disappear into the wet seaweed how deep we couldn’t know. Mr D was very annoyed with this exclaiming, “Bloody hell! So you come all this way only to risk breaking an ankle less than a kilometre from the finish!” 😣For the first time along this whole trip, besides for the tent, Mr D used his poles & we both carefully analysed where we would place our steps & slowly made it to the other side in one piece. 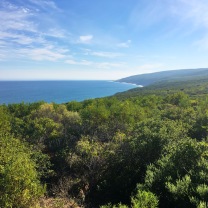 From then onwards it was an easy walk up the stairs & following Mr D along the easy track path to the Leeuwin Waterwheel. This is the official end but our walk didn’t feel completed yet. Mr D had a young lady take our photo, then we continued onwards up to the lighthouse. Mr D was swinging his poles saying,“I feel like a new man with these!” Just before the carpark, we met an older couple sitting on a seat enjoying their takeaway hot drinks. The man made to get up saying, “Here, you need this seat more than we do.” Mr D said, “No that’s fine thanks, we are heading up to the lighthouse to finish our Cape to Cape walk. We have just come from around the corner…. at Dunsborough!” The man goes, “Wow! Good on you! What’s next? The Camino in Spain?” “Funny you say that!” said Mr D, “We did the Camino last year!”

Feeling proud of ourselves, we crossed the carpark & went into the lighthouse tourist shop. There the man behind the counter knew exactly what we wanted to do. He offered a spot for our bags we could leave & go up to the lighthouse. I declined the offer saying I was happy to take my backpack all the way from one lighthouse to the other. We were the only walkers amongst all the tourists visiting the lighthouse. They wouldn’t get the feeling of satisfaction like us. We walked up & both patted the Cape Leeuwin Lighthouse. Done! We had achieved our mission! 🤗We enjoyed a cold coke at the lighthouse while waiting for Cy to pick us up. I went & obtained our end to end certificates that are already pre-signed but the names & dates are blank as we fill them in! We had arrived at 2pm & done 17.5kms, a pretty good last days walk. 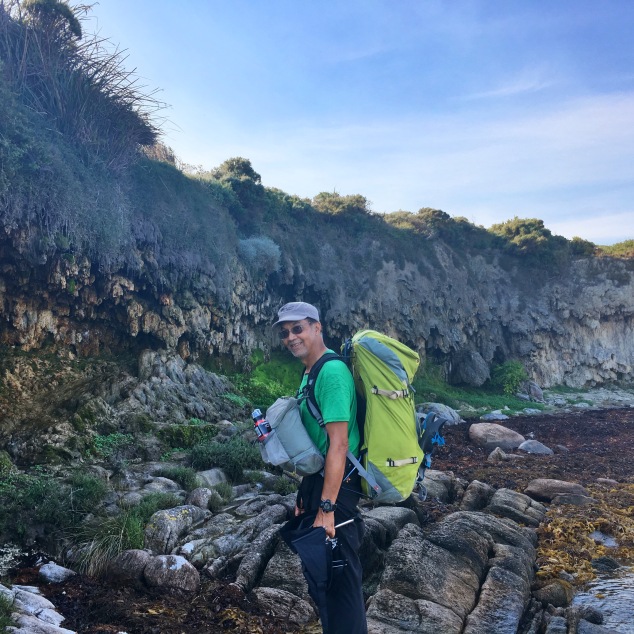 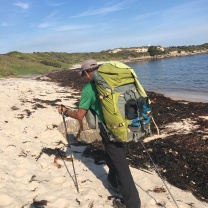 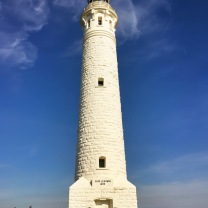 Well done to Mr D whom overcame all obstacles. He had done no training beforehand & had just recovered from a virus having been sick weeks leading up to the walk. I also had my minor cough / sore throat bug I was glad it didn’t worsen. The first few days of walking with my coughing & lack of sleep made it hard, lucky I was quite fit already which helped me through. I would recommend late Spring for the amazing wildflowers you would see. Autumn 🍂 is still a good time to walk it, we had an unseasonably warm May. We were lucky with very little rain & mostly North winds. And lucky to be able to complete it, this track is hard, can be dangerous in places & shouldn’t be underestimated. Just a ‘walk along the beach’ 😁