We are laying in bed totally exhausted at the Yallingup Beach Holiday Park. This is called the Aussie Camino where you walk from accommodation to accommodation, the only problem being is our packs are too heavy. Seriously but, we do have a tent & do plan on using it along the way – sometimes! 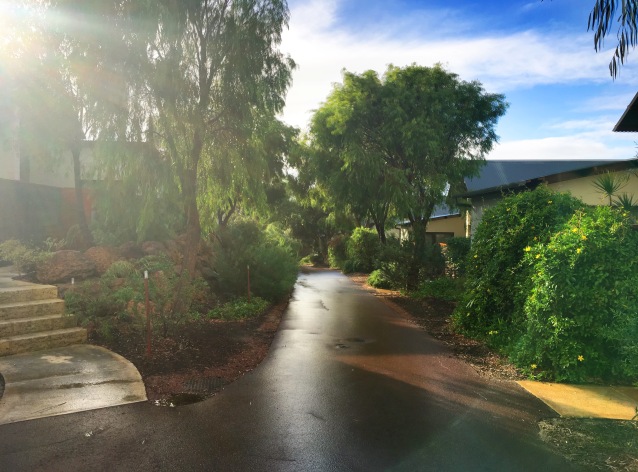 Lets rewind to this morning which seem so long ago now. No Cat Empire woke us up as Mr D forgot to set the alarm. He was mixing his drinks last night & was out like a light when his head hit the pillow. Not so for me as I coughed this annoying throat infection or mild cold cough all night which also kept Mr D awake at times so both of us didn’t get much sleep.

The day started grey which we weren’t expecting. So as we sat in comfort inside the Resort restaurant helping ourselves to a smorgasbord free breakfast thank you very much Roberto!, & looking out to the ocean in this wonderful spot, we felt a bit of despair. The rain came over, & it only seemed to get heavier. We watch, amused, the waitress setting up the outside tables for Breakfast as well under the roof. But we watched some rain hit the tabletops & no one was venturing out there to eat! 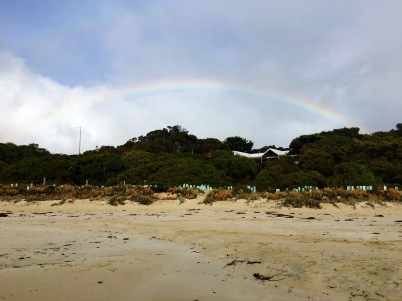 We had to race back to our villa in the rain, throwing our wet clothes in the dyer – such a convenience! We rearranged our backpacks for the rain & by the time we left – the rain had eased up! Typical but there still were some light rain about. So sad to leave a lovely place & walk away with heavy backpacks in dreary weather. Even the receptionist seemed chuckled over our agenda to hike to Yallingup.

Back on the beach briefly before heading up to Cape Naturaliste Lighthouse via narrow sandy trails overgrown with bushes & trees that drenched our pants & shoe gaiters as we brushed past them. I of course wanted to take the longer loop around going past Seal Rock. So you need a really good camera, binoculars or an Apple iPhone 10 to see the seals lazing about on the island of rocks far out in the water. I could hear more than see them. Lucky for us, Mr D had the iPhone 10. Impressed with the tiny dark shapes resembling seals, I was happy to get to the lighthouse & actually start this Cape to Cape track. I spooked a huge Kangaroo whom was taking a toilet stop just in front of me on the trail. I feel like I was the one that got more spooked & trod in some Kangaroo poop in my excitement of getting my phone out to take a picture. 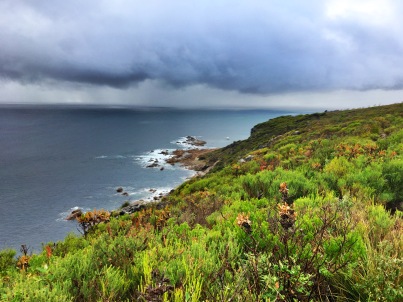 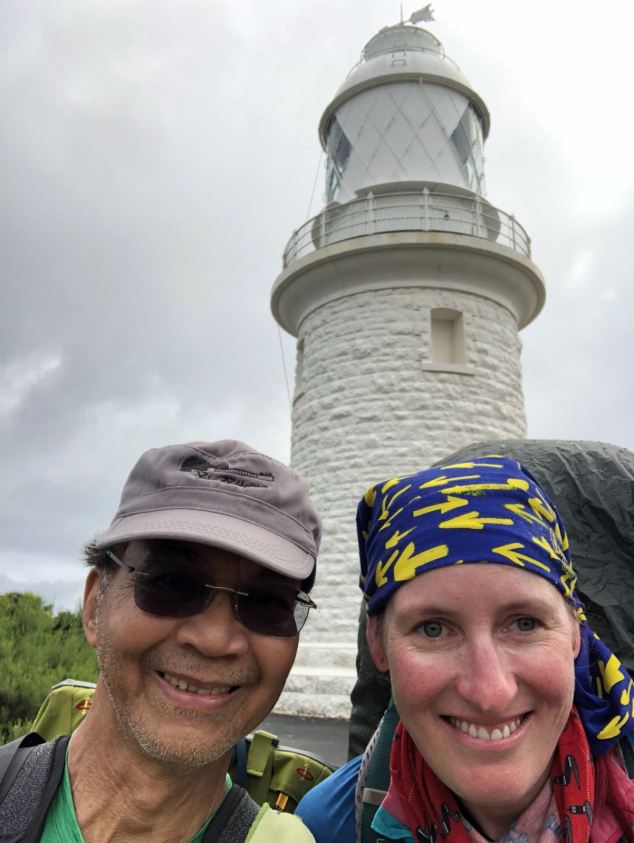 With our incredible slow pace, it took 2 hours before we even started the C2C. We left just after 9am – amateurs! And just after 11 we were at the register station to sign ourselves in. There was no pen! Luckily Mr D saved the day again with his little pen in his front balance pocket. The rain was clearing up now as we set off to Sugarloaf 3kms away on easy sealed pathways & board walks. I took the lead and trotted off at a steady pace. Just after 12 pm we had arrived at the Sugarloaf carpark. Sugarloaf is the name of the big rock that sticks out of the water there. Now I know what a loaf of sugar would look like 😶. We stopped here for lunch sitting on a little ledge outside the drop toilets. Just a simple meat & cheese wrap with a cup of tea. I had insisted on a cup of tea. A rather reluctant Mr D did not feel like getting out all the equipment for it. He was already tired & annoyed we still had another 10kms to go! A rather scary big ant almost crawled into my backpack before I spotted him & flicked him away. He was sure to give me a nasty bite when my unexpecting bare hand would fumble around inside the backpack for something later on. 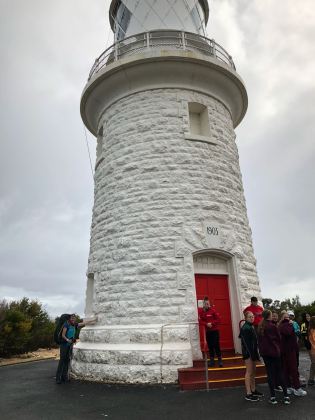 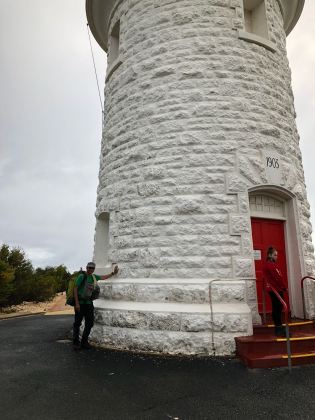 After 1pm now we were packed & back on track. This time the path would take us largely above the ocean near the cliff edges with sudden drop offs. The jagged rocks far below with surf crashing relentlessly into them. A narrow sandy trail that sometimes included rocks strewn all over the path to hop over & dodge around. Everywhere along the cliff tops were interesting limestone formations jutting out all different shapes & sizes. 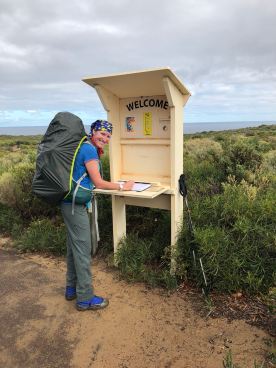 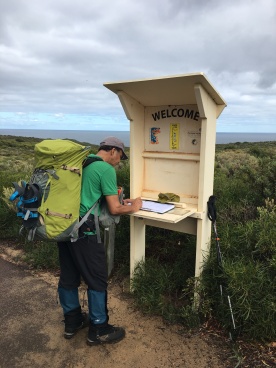 The hardest part was Kabbijgup Beach called Three Bears & not sure why the name. We had to go down the wooden stairs & walk along the sand for like 1km or so, then climb back out up the sand dunes. So why make walkers go down & come back up rather than go straight across?! The sand was so soft & hard to walk on, our boots sinking into it making for hard work. I was always ahead of Mr D & took no time mucking about getting back up. There I recovered & looked casual like as Mr D struggled up that sand hill. I think it broke him. After that, he was spent & looked so defeated as he trudged along head down wishing he was done for the day. 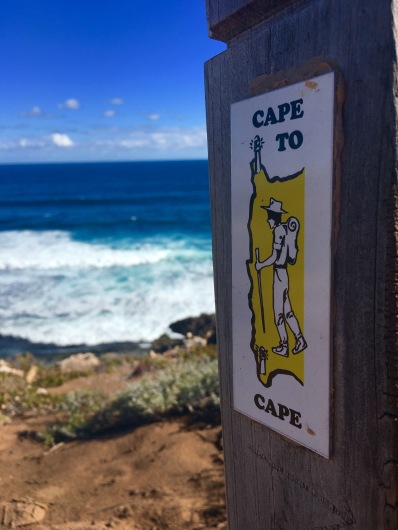 I would stop at a chair placed atop the cliff looking out. The best seat in the house! I would wait for Mr D to catch up, allow him to rest a moment on the seat before we continued on. Soon the trail left the cliff top & continued back from the ocean on a wide sandy track. Yallingup looked so close you could touch it. But it clearly was still a few hours away. Mr D was like, “I’m sick of this sand already!” We arrived at Mount Duckworth campsite – 3kms out of Yallingup. There we met Ben whom had also started the C2C today. He got to that campsite & decided to call it a day & was resting inside his tent as we came along. His plan is to go to Moses Campsite tomorrow, the same as us if we can make it there! 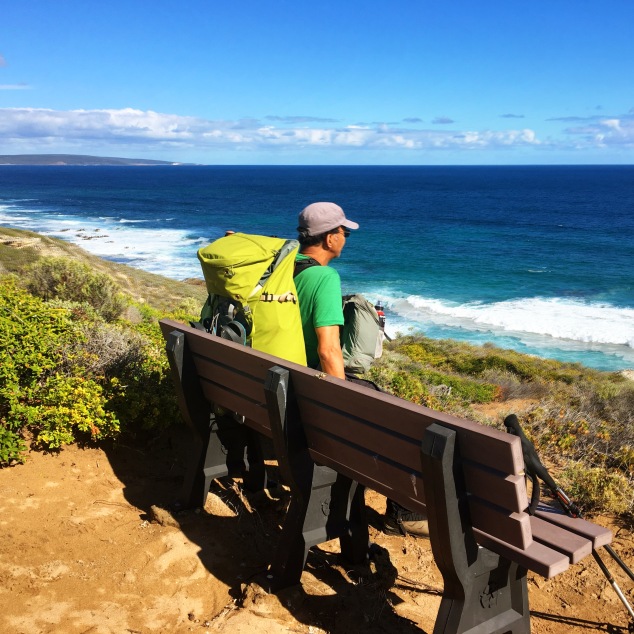 The last 3kms was struggletown. I was still in front & willing my sore feet onwards. We arrived in Yallingup just before 4.30pm & Mr D quickly found accommodation in a cabin at the Yallingup Beach Holiday Park. The kind lady behind reception said, “I finish at 5pm, so if you want, I can give you a lift to the hotel restaurant & save you a 15 minute walk there”. Sounded good. We were spent. Done for. Every muscle ached. Our feet so sore. We immediately upon entering the cabin, took off our backpacks, pulled off our gaiters & boots, peeled off our socks & inspected our hot red feet for blisters or anything else ugly. Then we promptly returned to reception still a sweaty mess for our free lift. 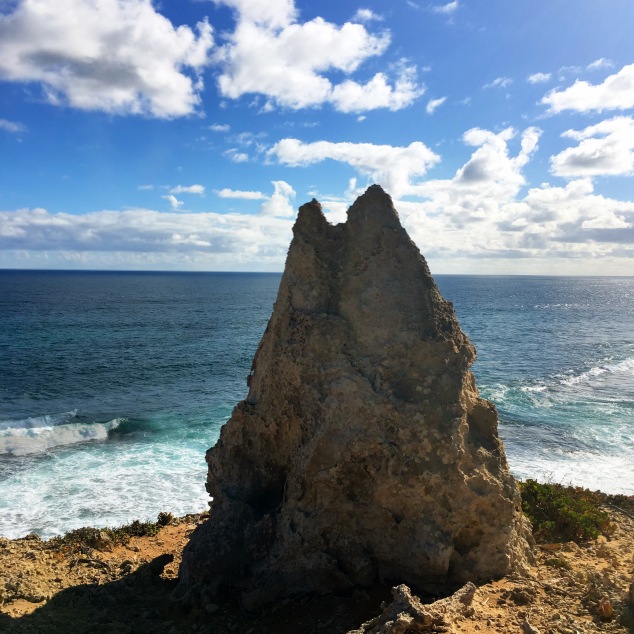 We were dropped off at the Caves Hotel restaurant. They have a lovely sitting area with comfy couches in front of a gas fireplace. Fantastic with a glass of vino. It was hard to leave that spot to go to dinner in the restaurant. Our bodies could not or did not want to move! But we did have dinner & it was delicious! Then we had to take the Ghost trail which isn’t haunted, back in the dark to our cabin. Lucky Mr D’s iPhone came in handy once again to light the way home. Today was 17.6kms. Mr D was certain we had done over 20kms. It felt like we had. Tomorrow is a longer day than today, we are in trouble! Now it’s a case of trying to get a good nights sleep & hoping our bodies can move in the morning! 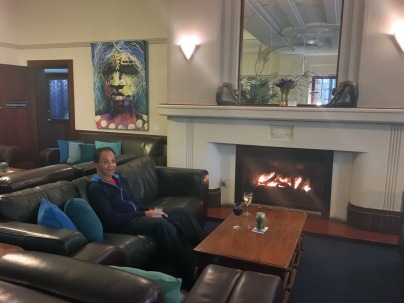 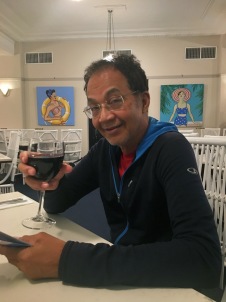