And so we start our journey. Not without the usual rocky start. Last night Mr D sprayed the bed with insect repellent paranoid after our last episode with bed bug bites. We had stayed in a Backpackers lodge & when we arrived we had paid for a single double bed room. For an extra $15 we could upgrade to a bathroom ensuite. Mr D said “So it is a better room?” The man replied “No, I just unlock the door!” That is the same room with the door to the bathroom unlocked! The double bed should feature a write up in Mr D’s upcoming novel titled “Banana Beds & Pancake Pillows”. Some time in the wee hours of the morning I was awoken by a sudden loud noise – 4 of the wooden slats under the mattress on Mr D’s side had fallen down, hitting the ground & causing him to fall in a sudden dip. Grumbling away he had to get out of bed to fix it. The bed was also terribly squeaky, even looking at it made it squeak. It is in due need of retirement!

Fast forward to waking up time & we were already awake when Mr D’s phone alarm started playing Cat Empire “Two Shoes”. We dressed & left the still quiet backpackers lodge for breakfast at the local bakery. After eating far too much on Sunday, I opted for a simple toastie & Mr D tried to squeeze in a big breakfast of bacon, eggs, toast, hash browns & baked beans. He couldn’t finish it. It is that saying “Eyes bigger than the stomach”. Walking back we witnessed a rare sunrise over the water – not common in WA at all but common in pretty quaint Dunsborough town. 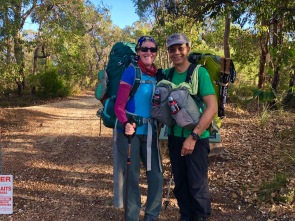 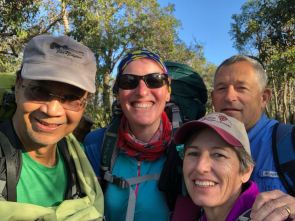 We packed & waited for our lift to arrive & take us to the Meelup Trail – 1.7kms away on the outskirts of Old Dunsborough. The lift was Melinda & Nick driving down from Bunbury to join us on a day hike! With good company & fine weather it was a perfect start to our walk. Alas we almost got lost right at the start! The trail isn’t very well sign posted with many intersecting trails so easy to wander off somewhere else. 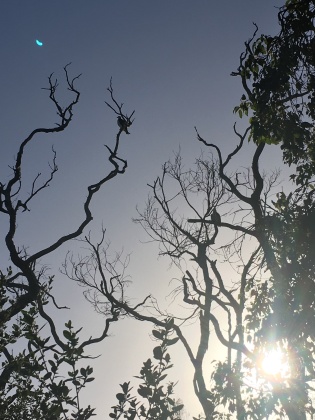 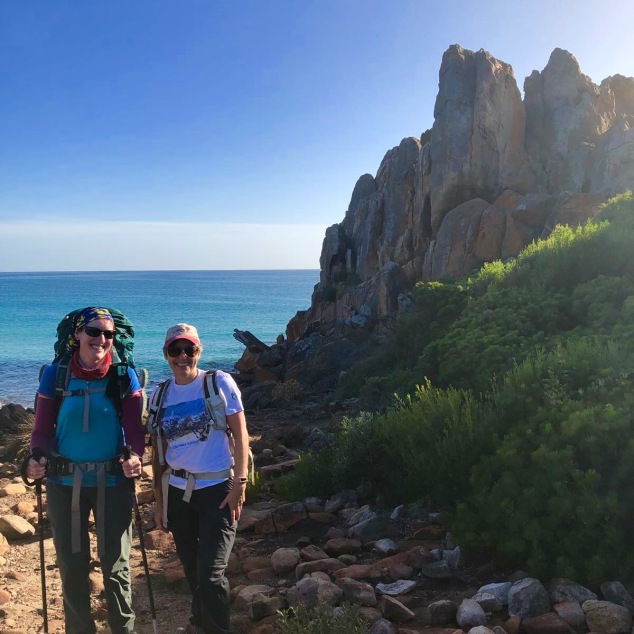 We walked along just inland from the beach, sometimes on the beach, meeting other people fishing off the rocks for the Salmon, surfing, running or just on a day walk themselves. The scenery lovely, many birds to watch & listen to, an odd bobtail lizard sunning itself in the middle of the path & the sound of waves crashing onto the rocks. Meelup Beach was a beautiful spot & as the sun felt quite warm, I regretted leaving my bathers behind. There is lots of picnic tables under trees & a very clean & mosaic tiled shower toilet block. Very impressed with the facilities, we moved on, finding ourselves off trail often. Mr D would pull out his Garmin & get us right back on track again. After Eagle Bay & some goat trails, we ended up climbing up some big rocky boulders around to Bunker Bay. 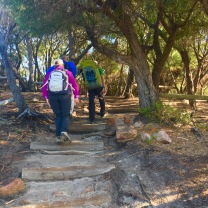 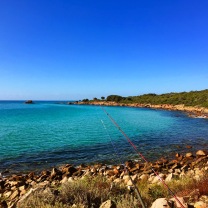 Here we farewelled Melinda & Nick as they returned to their car. We had a great morning chatting away & it was really nice having the company of others for a change. The morning went too quickly! 4 became 2 as we had a last km or so stretch right along the beach. I took up a steady pace eager to get off the sand. Mr D struggled & fell behind, I guess his backpack being heavier made him sink more into the sand. I waited & had a breather at the Bunker Bay Beach House cafe. It was 1pm so a fine time to stop have lunch & decide where to stay. It was an expensive lunch but lovely nestled in the sand dunes just off the beach. We enjoyed the last of their fresh OJ followed by an alcoholic beverage that went down rather well. The Garmin reported we had done 13.5kms today & I was happy to call it a day. Mr D rang the fancy smancy Bunker Bay Pullman Resort for availability. We had decided to rough it … was a hard day of walking after all, that last bit of beach walking was a killer! 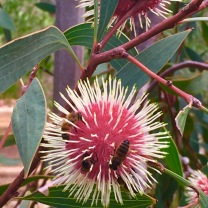 Gearing up our even heavier than before backpacks, Mr D was chatting to this bloke. Well the guy said he was turning 80 in a few months. We were like “No way! What?!?” The guy looked more 65, but he runs a lot & is keeping jolly well for his age. He said he did the Camino with his daughter but only managed half of the 800kms. He said “So where you off to? Walk a bit further & set up camp?” Mr D admitted to going just up the hill to the resort & the guy was like ” What?! Ah you guys are only carrying around those big backpacks for show!!” 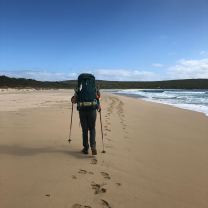 So with tired hot feet still stuck in boots we walked UP HILL! To the Resort. At least it is downhill in the morning. Bit of trouble at reception there. Roberto the Duty Manager could not see our booking. No email confirmation had been sent. Mr D was quoted $229 including breakfast. The manager was like “$249 is the best I can do. I can’t see your booking. I don’t know whom you spoke to”. Mr D decided he hadn’t walked too many kms & had energy to voice his complaints. So there was no messing around with Mr D today! The Duty Manager went out back to process the booking & when he came back said he found the original booking & the staff member had booked it all wrong & under a different name. It had the same credit card numbers as the ones Mr D gave him. So in short he gave us a free upgrade to a 2 bedroom villa & even took us personally on the Resort car around to our villa. There, the card wouldn’t unlock the door so he had to drive back & return with another. Eventually we were home for the night! In a big open villa, very cosy with own ensuite & bath. The second bedroom came in handy to lay all our gear out on. 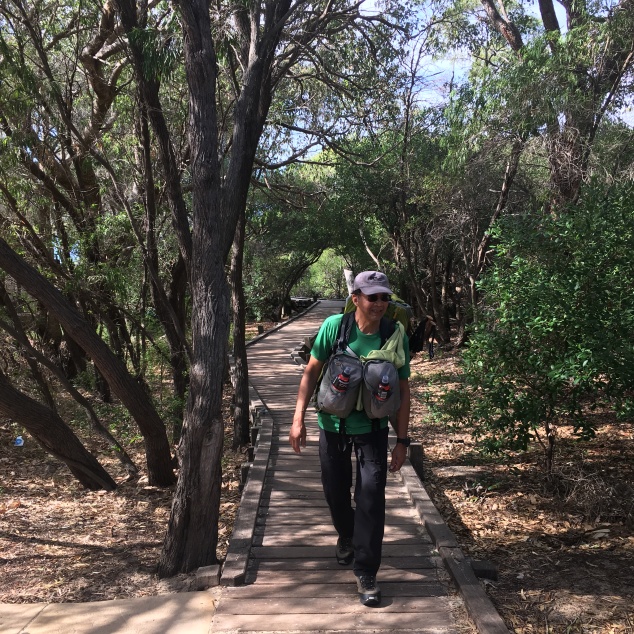 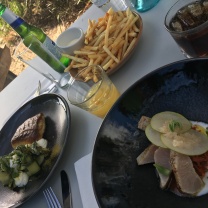 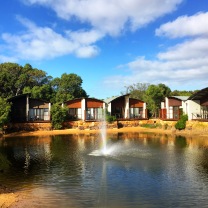 After a good bath soak & resting up off our feet, we indulged in another expensive meal in the restaurant including cocktails.  Very soon we will be roughing it in our tent & wish we were back here in this classy resort. So far, the bed feels great & we should hopefully get a good nights sleep. Tomorrow we start the Cape to Cape track! Mr D is already fast asleep at 9pm – just a little over indulging on alcoholic beverages! 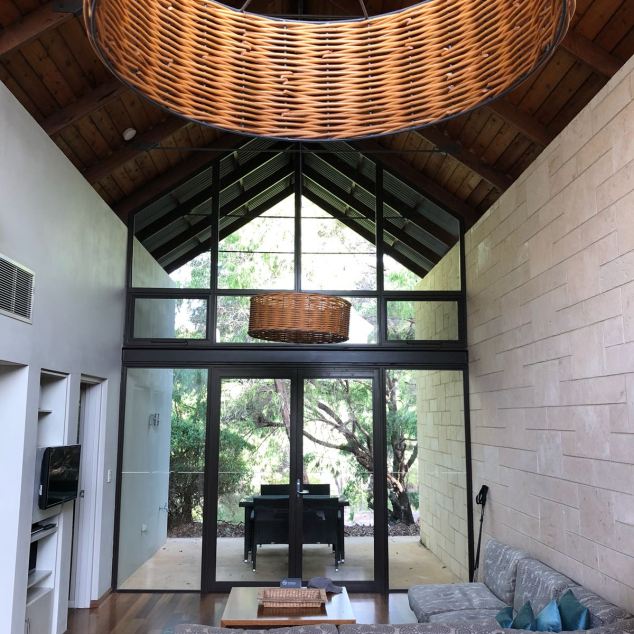 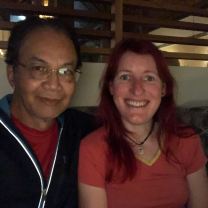