Our room got so hot I woke up 1am ish feeling like I was roasting in bed. I had to step out the room in the night chill while Mr D had to work out how to turn the heat down. After that we were fast asleep again. Breakfast was at 7am, but to our annoyance, the cafe was still closed. Two others were waiting in the cold with us & at 7.20am, a lady finally turned up & had to hurry opening up & serving us. It was all a bit stressful getting an order in, & the couple that came in after me got their breakfast before us as the frazzled lady worker confused herself & made only one toast not two for us. At least she made my toast more toasted then Mr D’s for the delay. 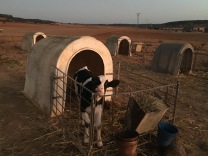 We left late after 8am unfortunately due to the breakfast delay. As we were leaving, Harrod & Sabina came down for a coffee. So we said goodbye hoping to see them down the road. The sun was rising as we left. The dirt road ahead was peaceful & quiet – well besides the sound of machinery in the distance breaking the quiet with its offensive noise. We came to David’s house & his rest area he had created for Pilgrims. It was all self service with biscuits, cakes, fruits, coffee, fruit & drinks on offer. Mr D wasn’t interested but I grabbed a glass of oat milk type drink. David was busy working on his house, singing away, a very happy & contented man. Harold came along as we left, Sabine taking a phone call from her daughter was not present. We again hoped to see them later and moved on. 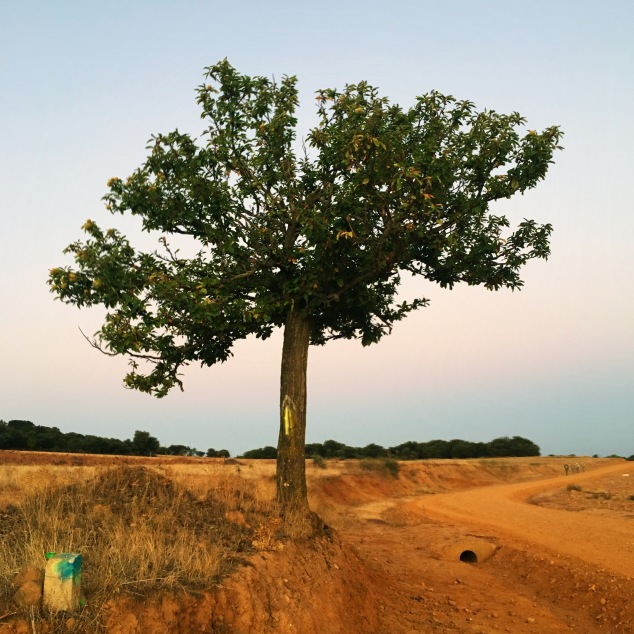 We came to the look out spot overlooking the town of Astorga in the distance, there was another buster here, playing his guitar & looking for donations. We continued into San Justo & through to the big town of Astorga which has a population of 12,000. Walking on the dirt road on the outskirts of town, we had to watch our feet as the path was covered in bits of small poop for 2kms. It looked like cat type poop. Walking into town was a bit of steep uphill walking which caused Mr D to groan in dismay. It was close to midday & we were getting tired & hungry. 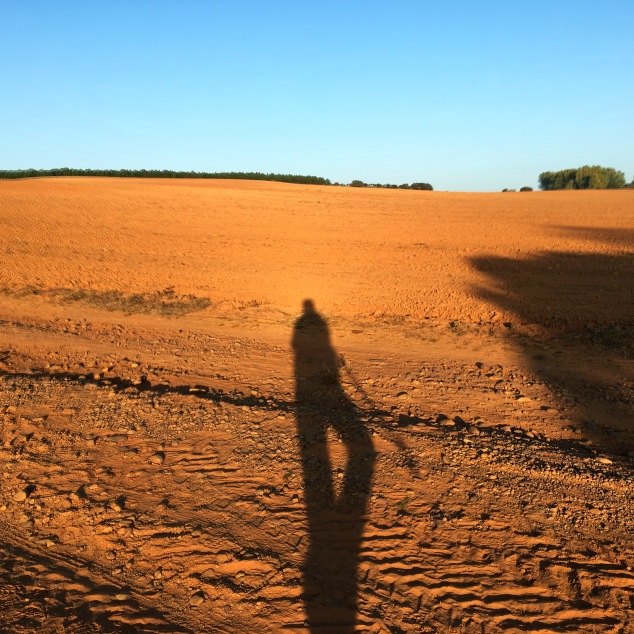 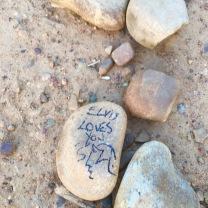 Mr D picked a nice spot for lunch. In the plaza cathedral next to the cathedral & in front of the grand Palacio Episcopal – the Bishops Palace 200 years old. The cafe across the road was brilliant & the waiter brought over our lunches across the road. I enjoyed tapas food & Mr D a pasta bolognese. With Coke & a lemon slice added to it! Very enjoyable lunch as I admired the Gaudi palace building. I wished I had the time to go inside the building! Mr D had the opportunity to go into a music store to find his instrument if he wanted….. All was needed was the sudden change of plans to stay in Astorga which was doable & wouldn’t change our plans much. Unfortunately, we decided to continue as planned. 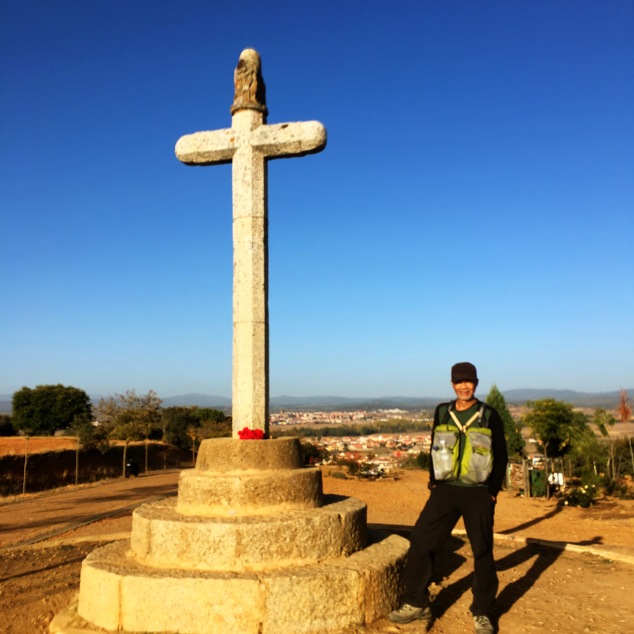 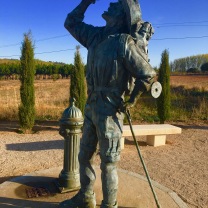 As we were putting on our backpacks to leave, Harold & Sabine arrived from around the back of the Cathedral! What great timing as we got to say goodbye. What started in Sahagun as an awkward dinner of 4 of us ended in good company & new friendships. We hugged & exchanged emails & chatted. Then we hugged again our final goodbyes. They were setting off in 90 minutes on the train to Burgos. Then back to Germany.

The last almost 10kms were a hard slog in to Santa Catalina. On dirt track. Straight. Under the hot sun. I tried to chat with Mr D, but he told me to go ahead. Mr D hates the heat, the only way he can deal is to put his head down & go. Concentrate only on the end destination. We arrived & the first Albergue called us in. The guy is quite crafty & calls Pilgrims in before they go pass to the next Albergue. We decided to go cheap & stay in a 10 bed bunkhouse for 5€ each. We were buggered & tired. Had a shower & the bugger light switches were a pain turning off every 30 seconds. The shower turning off every minute.  Grrrrrrr! 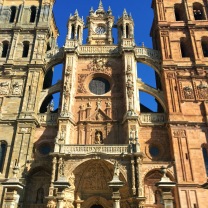 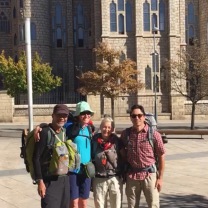 Afterwards we chilled out the front, Mr D with a Beer, me a Sangria. Two ladies came by. One Swedish lady that started the Camino the same day as us. The other, an American lady that started 3 days before us & was going at a very slow pace & enjoying it. They started late today & only came from Astorga so were continuing on to the next town. What that American lady said rung true for me too. She said it took her a long time to get over not keeping up with her group of Pilgrim friends she started out with. She finally accepted her Camino, her way & now was enjoying herself. She also went on about the Gaudi Palacio in Astorga – they had a tour inside it this morning. Damn I felt so envious! She said how amazing it was. But they never went into the Leon Parador! She said, “That would of been amazing! Like sleeping in a museum!” Mr D had a Baileys on ice & me my second Sangria. Life’s good! We went for a walk & bumped into the two French people we shared dinner with last night. They were staying at the second albergue along. 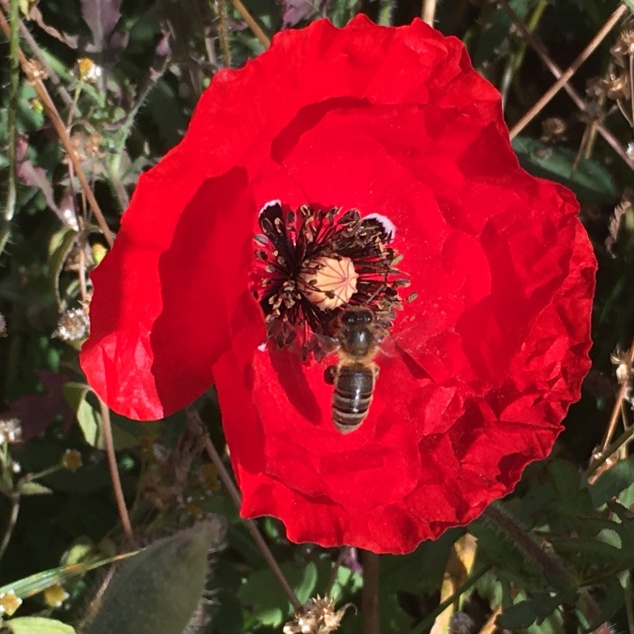 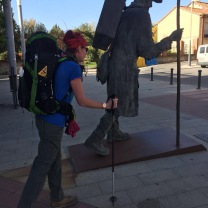 We shared a bunkroom & dinner with two guys. John from Arizona & a guy from Latvia that looked a bit like an actor I can’t think the name of right now. And the French pair came in too from their Albergue. We had a fun chat. One question asked about what France is like, Mr D chirped in the answer, ‘French!’ Everyone laughed. The French lady said if I come to France, I’m welcomed at her house. The Camino is such a nice community at times. Mr D helped out John with relationship advice long after everyone had left as us three continued with another bottle of red wine. 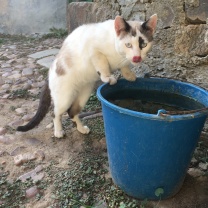 Returning to our room after fumbling around in the dark for our wet clothes to bring in, everyone else was in bed. There was only 5 of us in the room. I was brushing my teeth at the sink when Mr D said ‘Where’s the tap?!’ Indeed I was slightly drunk & had not noticed the bathroom sink had no taps attached to it & no soap dispenser! I bloody well had a big laugh about it & went to use the sink in the other toilet WITH a tap! I eventfully crawled into bed to the sounds of Mr D snoring loudly underneath me, causing the walls to vibrate. Guess he had too much to drink as well!

So it would of been different if we stayed in Astorga. But the evening ended well regardless. Tomorrow we start our mountain climb. The views coming in to this quiet little town set on the side of a hill were very nice. I can only imagine the views tomorrow! 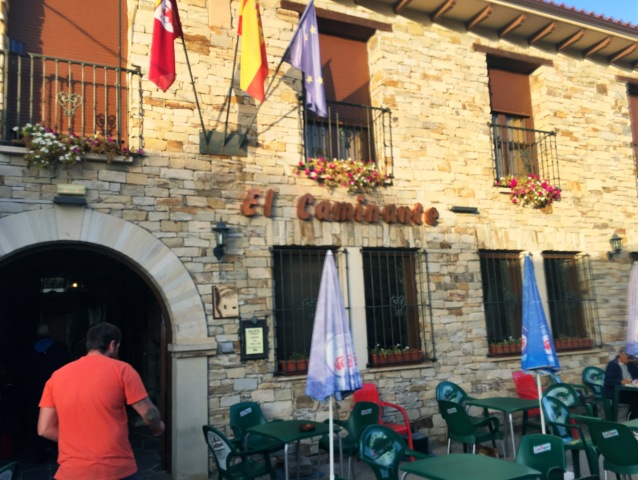