The door to our bedroom bunk room squeaked terribly loudly whenever it was opened. I slept well regardless, however the Englishman in the morning said “You would think they would oil that thing!” He had not gotten much sleep. We had a late sleep in again, had breakfast across the road & didn’t leave town until 8am.

Certainly this donvativo Albergue was much better than the first. It goes to show each is different & some normal private Albergues aren’t so nice either. Mr D whom strongly objected to staying in another Donvativo ate his words later & said he don’t mind going to another Donvativo now….. 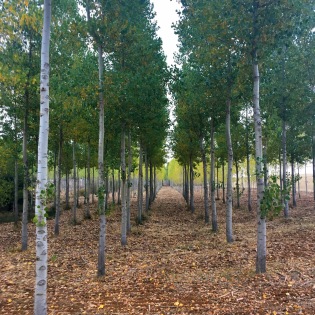 For the first 13kms I preferred to walk alone. The day was overcast & cool. The track simply continued by a quiet road all the way to the town of Reliegos. It was a long boring stretch as I reflected as you do in the Meseta & came to the same conclusions. I felt the Meseta had no effect on me. If I were to do the Camino Frances again ( highly unlikely ), I would skip the Meseta. And on a hot day, I could only imagine how unenjoyable it would be with very little shade. Linda passed me by speaking briefly as she was flying along. The strange fellow passed me then I passed him the same as yesterday as he stops & appears zoned out. The Meseta must really work for him. I had to attend to two more blisters last night; one on my heel that was causing some uncomfortableness rubbing against the inside of my boot with each step. The Compeed bandaid should hopefully fix it. 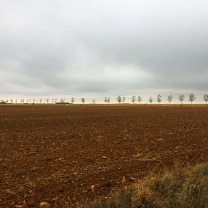 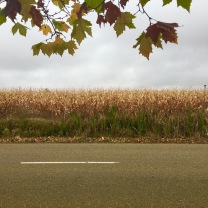 Mr D & I caught up on the way into Reliegos where we picked a bar to stop at for an early lunch. I simply had a mini pizza that took a bit of effort getting the waitress to reheat it. And cold churros – couldn’t be bothered by then with the request of reheating. She spoke no English but the Amigos guys had stopped for a bite to eat too & the American knew more Spanish than me. Mr D wanted another Paella which seemed to take a long time to cook. 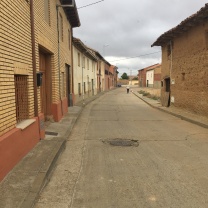 We eventually were back on our way with only 7kms to go. It finally started warming up & the sun came out. We arrived in Mansilla, a population of 1,900. The town is interesting, it is enclosed by its medieval walls from the 12th century. Not much of the walls remains & only one gate archway remains intact – the entry from the Romana walk. The Camino Frances which we were on passes through two walls which is what remains of the gate archway there. 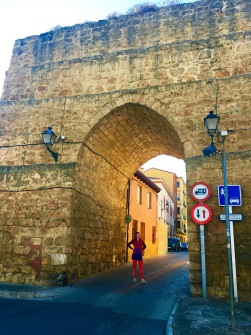 We agreed on the Municipal Albergue as it was located right in the centre. A big Albergue of several buildings with a central patio area for chilling out in. We walked to the river & came across the two amigos. They had booked in to a hostal to get a good nights sleep. The Englishman was saying to me it’s his wife’s 60th birthday tomorrow so he was walking down to the 60 speed sign & taking a video message to her in front of it. We encountered the two Linda’s drinking vino outside a bar in the cold shade. We were seeking sun & warmth & declined joining them. We ended up back in our Albergue patio drinking red wine, while Mr D played the guitar that belongs at the Albergue for anyone to play. Then we just listened as others took turns playing the guitar. It was a very chilled out restful afternoon. An Irishman called Ray & Mr D had a nice guitar playing session together. (Videos cannot be uploaded here so view the AmblingRose Facebook page for video uploads.) 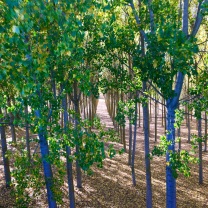 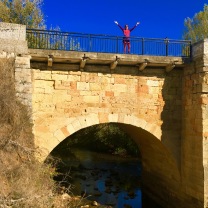 We went for a walk to find an early dinner at 6.30pm. In Spain! That may be asking too much. Mr D noticed the looks I was getting from the locals in my bright red SKINS tights. “Did you see that lady sitting in the car – she glared at you!” The men’s jaws drop & the women give disapproving looks my way.

We found a restaurant in a hostel, the waiter opened up the restaurant just for us. Followed by Irish Ray & the two Amigos, it was just us 5 in the restaurant all sitting at different tables & talking to each other across the room. The American  amigo finally warmed up to us. The Englishman took our photo for a book he will be writing. Dinner was pretty good & I tried the Santiago cake, a signature dessert which pleased my taste buds. The Amigos left before I & the Englishman said “If we see you in Santiago – we will have a drink together!”.

The evening ended with a quiet drink with Ray, watching the young Pilgrims gather around the outdoor tables for a home cooked meal. Ray is a real funny fellow. He brought flowers for the daughter of the mother that owns the Albergue & asked for marriage in a cheeky manner. He has been given the ‘Roncador’ room. His own bunk room as he snores terribly ( causing the walls to shake ) & has a bad cough ( smokes like a chimney ). He entertained us all with more playing & singing. A good night to finish our Meseta stage with.