Last nights blog post was jumbled up a little due to the hassle of writing it. Boadilla is basically a Pilgrims town not an actual town. There was no phone service & wifi poor. My phone couldn’t load WordPress but Mr D’s could. However his phone kept playing up too so the blog took twice as long. This morning in the hotel room my phone appears to be working again perfectly fine – go figure!

That was a Camino test & I had failed. I got all annoyed, frustrated & snappy. I was short with people & didn’t want to socialise although I did talk to Jill at dinner. I hope to do better next time.

The hotel room was too bright to sleep. The shutters were open & the street light lit up the room. We couldn’t figure how to close them until Mr D saw the button you press to make the shutters go up & down this morning! Mr D also commented his bed sloped to the side. He needs to write a book titled Banana Beds & Pancake Pillows!

We got up at 6am & left at 7am walking in the dark towards Fromista, 5kms away. Mr D was feeling pretty unwell with the sniffles & sore throat. He could feel himself coming down with a cold or the likes. It was warm outside & not a soul to be seen. As it started getting light, we saw we were walking alongside a long canal. It was a pretty morning walk besides the canal & trees as big fish splashed about.

Crossing over the canal to the town of Fromista, a real cute white & ginger cat followed me meowing away & rubbing himself against me. He was the sweetest thing covered in war wounds, but I had no cat food in my backpack to give. I wanted to sit him up on my backpack & take him with me as he watched me leave still meowing. I felt awfully sad then.

We stopped at the first cafe for the usual. I went out to the vending machine to get Powerade drinks & spotted Jo whom stared at me a moment, then broke in a big grin & grabbed his wife Sigrid, The German couple we first met in Orisson & last saw in Puente la Reina 2 weeks ago! Sigrid was so happy to see us she gave us big hugs & said “I thought we would never see you again!” Jill was there too from last night & came over to talk. Mr D was catching up with Jo whom pulled out his weather app & said the next 3 days were rain! Our luck has run out with the good weather. They were going to wait for the church to open at 9.30am. This is a famous church that lots of visitors come to see. The details on the outside are just incredible. We told them we were to press on before the heat set in & said our goodbyes. We would maybe see them in Carrion if we made it there today depending on Mr D’s cold. 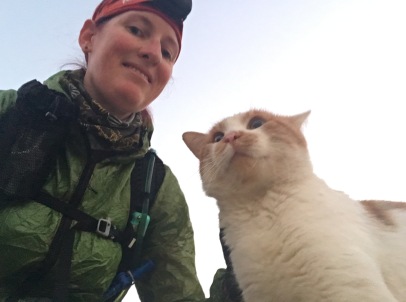 19kms of this section runs beside the busy road in a straight line. There is only brown pastures as far as the eye can see & is the most boring part of the Camino for sure. We walked along a small way then detoured in to an alternate route which added on an extra 900metres. The book says it is a lovely detour under shade of trees by the lovely river. Well it built up expectations that did not deliver. In spring I’m sure it’s lovely, in Autumn now trees have lost their leaves, there is little shade & the river was mostly dry with some areas containing a puddle of stagnant water. Let’s say there’s nothing to write home about it. There was meant to be a cafe halfway along as we built up high expectations of having a hot drink with an iced doughnut. Well all there was, was a pretty little park, the cafe had already closed up as some places have closed for the season. And the cap returned or just happened to be the same type of cap, I saw yesterday on the rocks, today I saw by the river. It might be like the travelling gnome & will pop up somewhere along the Camino when you least expect it!

Still, the river was a better alternative to walking along the roadside as many others did. We arrived in Villalcazar de Sirga where we had planned to stop for the day, however Mr D was happy to try to push on. In fact we got there at 12.30 pm & he wanted to push on without stopping! I said no way gotta stop rest eat drink then move on! The Don Camino cafe bar was very inviting. We had 2 glasses of ice cold Coke each & spaghetti. The spaghetti here is a lot of pasta with tomato sauce through it with 3 pieces of meat. It didn’t touch the sides on the way down! Marisa the German lady from dinner last night was inside the bar & these 3 Frenchmen came along saying “Where’s Marise?!” Mr D pointed to inside as they went in all hovering & talking happily to Marisa, just like bees to the honeypot. This lady is obviously popular on the Camino. Two ladies came by next looking for her & saw the men with her. They walked away with annoyed looks on their faces! Then we had Jill come along to see how Mr D was doing. After a short chat, she was on her way.

Mr D was happy I had made him stop for lunch. Feeling better, we made the last 6kms into Carrion, with Mr D telling everyone how he will ‘carry on into Carrion’ Aussies are needed on the Camino for their humour you know! So the last 6kms were quite boring along the roadside but we ambled along. It is the longest day to date! Our feet felt sore but we managed it! The first Albergue we saw we booked into which is in a monastery building. The guy that runs it is a bit of a character. He turned up on his bike when we were contemplating going in. He talked us in & went through the rules & stuff while his trousers kept wanting to slide to the ground. We got a bedroom with 3 beds in it. Mr D hoped it would just be us two but was disappointed to see a German man on one of the beds. You wouldn’t want to be over 6ft tall as the ceiling in the bedroom is so low! Mr D asked about free wifi in which the man let out a loud sigh & said, “We don’t have wifi here!”. I gather everyone asks him that question! 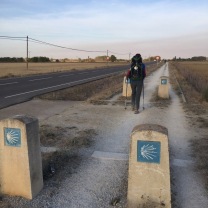 We went through our normal ritual. Loud Italians turned up which made Mr D annoyed. He said “Why do Italians have to talk so loud?!” Then the church bells that seem to be right in the next room went BONGGGG! We went to find the supermercado as Mr D was stressing the next day is 17kms before the first town for drink & food. We got bread roll & meat to go with our cheese. We are all prepared now. And the cafe close by is open for breakfast at 7am so all should be good! Besides the impending rain which is nothing we can’t handle!

We strolled around & settled for beer at a Spanish local bar. Jill came by & asked to join us so we ended up drinking wine & chatting away. Then it was time to think about dinner. We walked around hoping to see our German friends. It was getting to the point of hopelessness so we looked for a place for a meal instead. I spotted Joe in one such restaurant serving peregrino meals & we happily joined them for dinner. They had also went looking for us. So we finished our day with good food, good wine & great company! Lets see if we can beat the rain tomorrow! 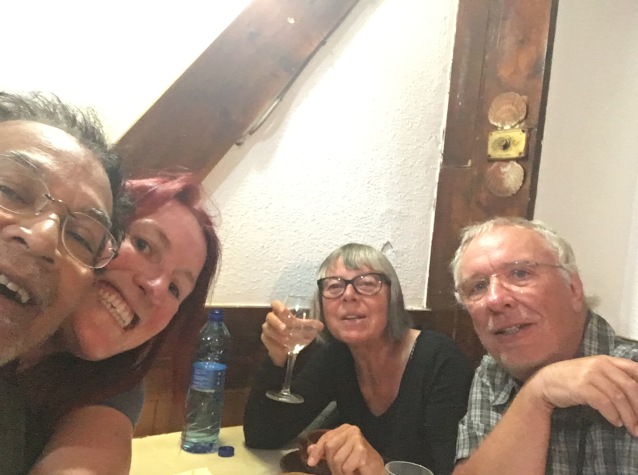