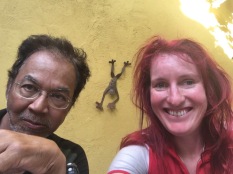 We got a better night’s rest after the young Spanish Hooligans outside the street stopped their loud carry ons & gunning their flash cars along. Mr D’s Betadine gargle helped my throat & it was feeling better plus my sinuses had cleared up. We had our bread, cream cheese & chorizo in the kitchen, the only thing missing was the hot drinks!

Everyone was out the door by 7.30am, the air feeling quite warm & the dark clouds ominous. We headed out of town as Kevin from Canada passed us, recognising me & asking Mr D why he didn’t go up to the Castle ruins yesterday. We had to head up a hill, by the time we reached the top, we felt some rain splatters. People quickly put on their rain gear & Mr D continued ahead. I stopped as well & glad I did. I got to watch the sun come up over the horizon just as the Israel woman reached the top. She exchanged a brief greeting, now walking on her own as her husband had to return to work. She seems to prefer her own company, either that or Mr D thinks because we witnessed her struggling with walking in the early days she feels embarrassed. She walks easily now no problems. I enjoyed the sunrise then set off again. There was no rain, a false alarm. It got cold & windy before warming up with blue skies – a funny sort of day.

The morning was perfect on the wide open meseta under the cloudy sky – what a perfect day! We have different walking styles. I like to stop often & photograph lots. Mr D gets in the mind set & just walks head down. He hates stopping & starting. Sometimes it works sometimes he gets an annoyed look at me at being held up. Such was today. But at least I enjoyed the sunrise & see things he misses out on. So we walked to the next town, passing a small church serving donvativo coffee & biscuits. Passed the beautiful rio Pisuerga river then into Itero de la VEGA town for coffee & tea. Well I asked for tea & the nice older guy behind the counter gave me coffee instead so had to settle with that. Plus an iced doughnut as it was morning tea! 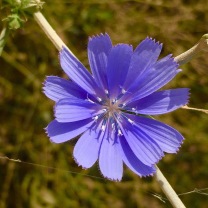 That’s when the day got hot & we walked a long straight road again to nowhere. Mr D was going loco & telling a story about the place he had booked ahead. It was advertised with a basement swimming pool. So he spoke about sitting in the pool, getting served vino on one hand, grapes on the other. And as he sank into the pool they put a buoy under his feet to keep him afloat. I told him not to get his expectations up too much!

One lady decided to plonk herself down in the dirty ditch by the road to remove her shoes. Meanwhile she had passed a nice grass area under trees which seemed a nicer spot to rest. I used my brolly with Mr D & together we ambled along in good spirits under our brollies. Mr D singing & entertaining me. I liked to call us the ‘brolly aussies’! 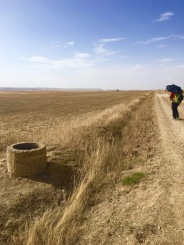 One man on bike stopped Mr D thinking he was a basque gypsy as they all carry umbrellas in the sun. Then the guy didn’t want to stop talking! Mr D had to cut in & say “we gotta keep moving, my feet are getting too hot!” The guy was lonely & wanted to talk to someone. I noticed his bike had a brooks saddle – for those in the know for long distance cycling! He rode off after saying to me “Can I have a piece of your hair to use as a fishing lure!”

We got into Boadilla just after 1pm in time for lunch. Mr D had booked us into the hotel adjoining the En El Camino Albergue. Private room with the standard two single beds pushed together. Own bathroom = luxury. I add the extra benefit is that we can remove our boots in our room. With Albergues, BEFORE going to your bunk bed, boots must be removed & left outside the room in a reserved spot & poles in a reserved bucket also near the boots. We went for lunch & downed the standard beer with a ham & cheese sandwich. Unbeknown to us, after leaving to go back & freshen up, the German couple came through & had lunch there & moved on to the next town! Damn! One lady walked in looking like a complete mess. She looked shattered to say it nicely. She had tapping bandages up both legs to under her knees, one ankle strapped up, face the colour of beetroot. She walked painfully. However she ate & was on her way again. 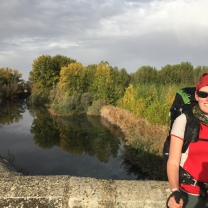 We sat & enjoyed Vinos & nuts in our little outdoor area & met Jill, started in Burgos & going to Santiago on her own. This is her second Camino Frances & lives in Sydney, Australia. Very nice lady but travelling fast so likely we won’t see her for long before she is way ahead of us.

We went back to the albergue for communal pilgrims meal & the room was full, hot & stuffy. They had put on the heaters, combined with the number of people, it was uncomfortable & loud. The food was good – 3 courses with ice cream for dessert! Jill sat next to us, joining us was a lady from Canada & lady from America. On Mr D’s right was Marisa from Germany that told us she had spoken & seen the Jo & Sigrid. Mr D entertained us all with his jokes & stories. The room had beautiful paintings on the wall & it says in the book that the artist of the paintings prepares a typical castilian menu for the pilgrims. Mr D found out the son’s mother did all the paintings. 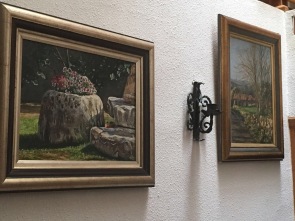 Oh & the basement pool right? Turns out to be the small swimming pool outside the albergue cafe alfresco area & is a lovely green colour! So as tempting as it was, we decided to give it a miss. Through I did see some people bathing in it this afternoon…..

And I will also add the flies here are terrible just like the ones at home! We shared our vino & nibbles with the flies earlier this afternoon. Mr D was upset when one went into his vino & drowned in the liquid. I on the other hand put a book on top of my glass to keep the friendlies out! Mr D’s remark after removing his boots & socks today – “My feet have the same pattern as my socks!”

So tomorrow we need to pull a long day if we hope to catch up with our friends from Germany. We shall see……