We took an early start to the day, leaving our Albergue just after 7am. It was still dark as we left the town so the beauty around me could not be fully appreciated. It was also FREEZING cold & soon my fingers turned into ice cubes through my gloves & my toes were starting to go numb. 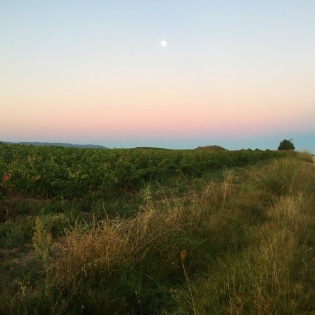 There was a lot of Pilgrims leaving early with us as they all marched by easily overtaking our slow amble. Some had a tiny backpack that would only weigh like 2 or 3 kgs. These type of people  carry most of their stuff in a suitcase & get it transported to their next accomodation. Some people carry their whole home with them on their backs in big 65 or 75litre backpacks. The backpacks are bulging already with added sleeping bag, clothes, rolled up thick mat & extras all hanging off the outside of the pack. They look uncomfortable & have to rest a lot. The majority of people like Mr D & I carry a 38 to 50litre backpack which is standard on the Camino. I prefer to carry my stuff so I can stop early or go further & not be restricted by where my luggage has been sent to.

We must be speeding up even through it doesn’t feel like it, as we did 6kms in the first 1.5hrs to a tiny little village called Azofra. There we stopped at a cafe for breakfast.

The scenery had changed somewhat to more open pastures with scattered vineyards & trees here & there. There really wasn’t a huge amount to look at & the wide gravel road made easy walking. The only interesting thing was a car driving along with a dog on a lead attached running alongside the car. At least the lead was long, the other day a cyclist had passed us with their poor dog on a super short lead attached to the back of the bike.  The dog had to keep up with the speed of the bike otherwise it would choke on its collar. 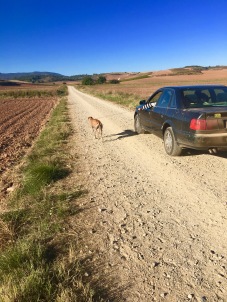 Heading into another more modern looking town called Ciruena, there was a man selling fresh fruit, jewerally & drink for a donation fee only. I grabbed a cup of refreshing watermelon & headed through town onto our last leg of the section with more bare open pastures & nothing else significant.

This is where Mr D charged ahead, disappearing into the distance with all the other marching Pilgrims. You can see the town, it looks close, but really is deceptive & is usually still another hour or so away. I started getting jolts of pain in my Achilles’ tendon again. This was the Camino telling me to slow down. I stopped & put on my ankle brace then very slowly & using my pole to help take some weight off my foot, walked into town by myself while a lady behind me bellowed out a song with great gusto to no one in particular. I imagined Mr D waiting for me in town saying “I knew you would be alright”. I caught up to him on the outskirts as he was chatting away laying on the ground resting, to a young lady. Sure nice to know he was concerned I had been absent for over half an hour! 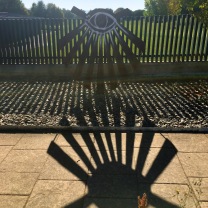 Martin & Anna the honeymoon couple from Melbourne caught up to us & we all headed into town for lunch in the sun as we were all still trying to warm up. Another young lady called Laura joined us, she was traveling with her friend we had met in Logrono whom had been robbed. In more detail, the thief had stolen people’s phones while they were on charge, so had others their money bags stolen containing their passports & money. One such young lady in our dormitory was very upset after her phone had been stolen & some kind young man was going to help her get a new one.

Our plan had been to book in to the parador – a very nice expensive hotel in the town square. It once was the hospital & been converted. But it was Saturday & everything was booked out including the smaller hostels & pensions. We didn’t have any other choice but to book into one of the two Albergues. The closest one a big place containing over 200 beds. So all four of us ended up in a bunk room with 12 others. And it costs only 7€ each with separate men and women showers so can’t complain about that! 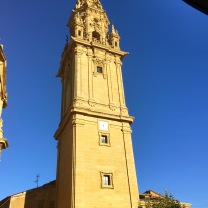 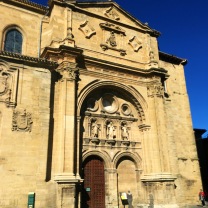 Santo Domingo is an interesting town & I had a look inside the amazing cathedral & took a tour around all its history. So there is a rather famous legend that happened here long, long ago that I will share:

There was a young German Pilgrim man walking to Santiago with his parents, where they stopped to rest at an inn in Santo Domingo de la Calzada. The Inn’s owner’s daughter fell in love with him but her feelings were not reciprocated, so angry at the rejection, she planted a silver goblet in his backpack. The young man was then accused of theft & condemned by hanging. His parents sadden by his death, continued their pilgrimage to arrive at Santiago de Compostela. They turned around to return their journey to visit the grave of their young son. When they arrived in Santo Domingo, they found their son still hanging in the gallows but, miraculously alive. The son said to them “Santo Domingo brought me back to life! Ask the Mayor to take me down”. The parents quickly arrived at the Mayor’s house & told him the miracle. The Mayor, about to have dinner, responded “That boy is as alive as these two roast chickens we are about to eat”. With that, the chickens came to life, sprouted feathers & beaks and began to crow! The Mayor astounded, went down to the gallows & released the young man, letting him go free. To this day there is a saying about the town which goes: “Santo Domingo of the Way, where the roosters crow after being roasted”.

Believe it or not!