29/9: There is noticeably more birds along this whole section from DRV. 5am this morning the Kookaburras close by erupted into a loud chorus of laughter. Then other birds joined in, the air filled with birdsong. I will really miss this, waking up to birds & looking out to the trees & bushes outside our ‘bedroom’. Enjoy a hot cuppa while admiring nature & the surrounds. So glorious! 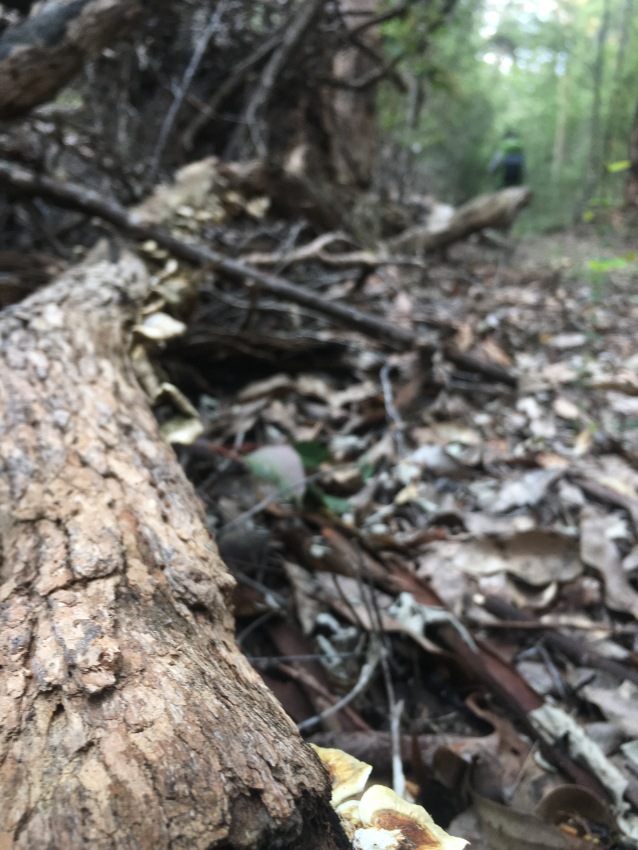 Ambles didn’t sleep so well, John kept him awake with his loud snoring through out the night. Ambles let me have an extra half hour sleep in & we got up at 5.30am with Deb whom also rose early. She told Mel they would leave late & walk slow because of Mel’s foot, but she was awake from 3am in her tent & couldn’t stay in bed any longer. Geoff & Lisa left first followed by John & Lindsay, Daisyfish, us with Deb & Mel last. Another cool morning, a bit on the cold side. Could barely warm up before we hit a big incline hill. Who put this bastard of a hill here?! We had several fallen logs, large branches & other obstacles to get around, over or under. This section is full of them! Ambles grumbles when he steps on a stick & the other end of it flicks up scratching his other leg. I have legs covered in scratches from this section only! Plus many mozzie bites up & down both legs – they have seen better days.🤔 Most of the track was easier than yesterday with lots of little ‘burp’ hills. But those small ups felt like hard work, our bodies were still tired & recovering from yesterday’s Rollercoaster. I spotted many teeny weenie snail orchids along the path. Those cute little birds would flutter down the path, stop & watch me, as I got close, they would repeat fluttering further along, stopping, watching & taking off again. The small delights I get on the track. 😊Ambles was sweating with effort, still fighting some niggling cold. His backpack he has worked out is the wrong size. He got a large instead of a medium & the bag sits pass his butt. Even when he gets his new belt, probably won’t make much difference. He’s upset about wasting so much money buying the wrong size, he aren’t gonna fork out another $450 for another one in a hurry. 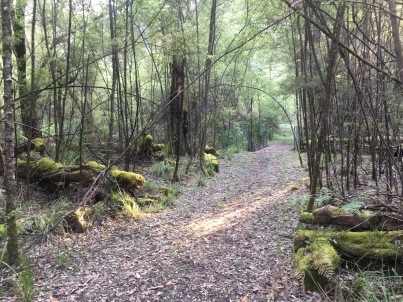 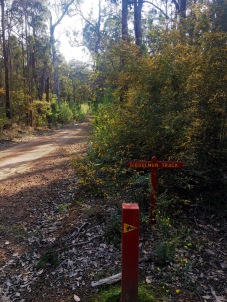 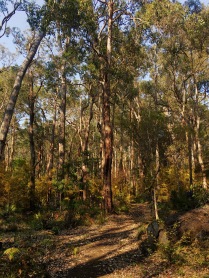 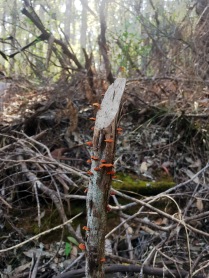 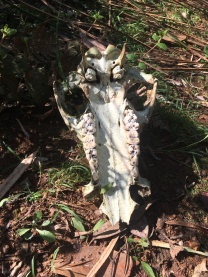 We stopped after a good 13kms in at Carey Brook, a nice little waterfall spot to have a mini break. There’s this amazing tree close by, the Karri Marri Tree – A Karri tree with a conjoined twin growing out the side of it being a Marri tree. Deb & Mel went by & we asked how Mel was doing. She had re strapped her foot with strapping tape Daisyfish gave her. (She had already used up all of hers) Said yesterday her pain was a 9/10, today it was a 2/10 which was very pleasing to hear. She is doing well but they decided to skip the cafe at Karri Valley Resort & go straight to the shelter. Ambles also was not interested so it was just me doing the kilometre side trip. I gave some lunch for Ambles to take & have at the shelter & I was off, racing up another long steep hill. Why do we stop for a break just before a big hill climb?! The day had warmed up considerably & I was sweating away & dreaming of swimming in a river, just going in with all my clothes on. The landscape changes as we move into Beedelup National Park with more wildflowers again. It’s a Sunday long weekend so the gorgeous Karri Valley Resort was swarming with many people, lots of kids & foreign tourists. I looked quite the part amongst them – a dirty, stinky hiker coming through. Got many looks. 😆Never been here before & what a great spot! Gorgeous wooden chalets overlooking the dam. People fishing, kayaking, swimming, walking. A mini golf course nearby. There is no cafe but a fancy looking restaurant with an equally fancy looking menu rich in price. Thought, nah, will just go to the general store there & settle for a cold coke & ice cream. Would stand out like dogs balls in there anyhow! Sat on an outside table under the shade of a tree & ate my packet of tuna, consumed my coke & ice cream & felt damn good afterwards! I reckon what really made me want to go in was off loading my smelly bag of rubbish & empty wine bottles. Was bloody ecstatic dropping all that in a trash can! That side trip took an hour but was so worth it!  It took another hour to get to the shelter after a 22km walk for me including the side trips. I trooped onwards & upwards to Beedelup Falls which was swarming with more terrorists (ah hum – tourists)😁, as I lapped the falls circuit twice for good measure before finding the toilet & Bibbulmun Track South out of there. Was pretty good but, nice falls, wanted to go stand under the falls with all my clothes on. Didn’t know about the secret swimming spot next to frogs leap jetty that Daisyfish found & had a swim at. In fact I was 20 metres from it not realising – darn! Never mind, finished the rest of the walk under the warm sun. Got in at 2pm, an hour after Ambles. Geoff & Lisa had stopped for lunch & a break before continuing on up the track. They want to make a shorter walk into Pemberton tomorrow by free camping 8 odd kms further on. 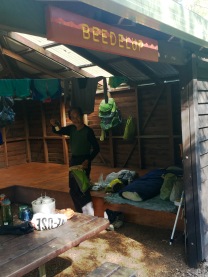 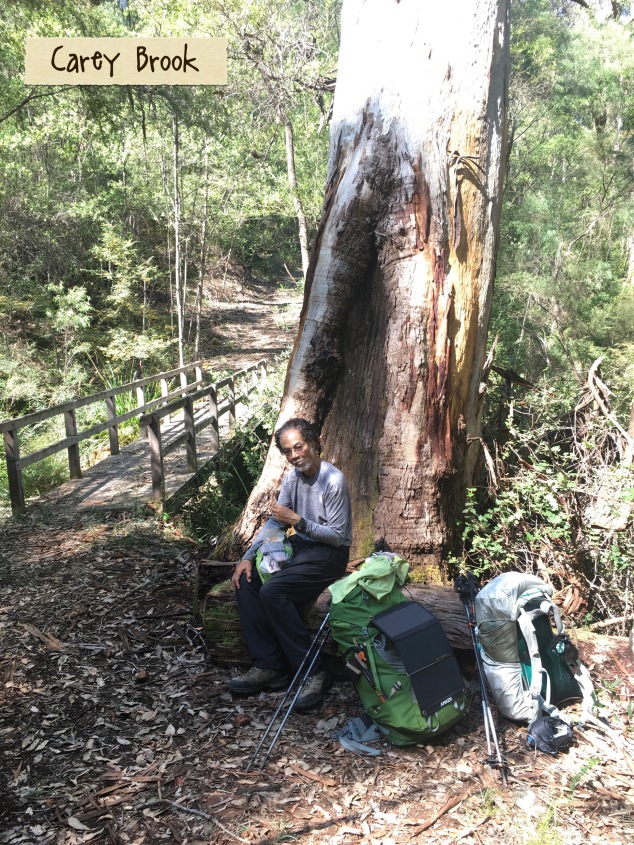 I had time to relax & have a stand & splash in the running Brook next to the shelter. The water was refreshingly cold & only calf deep. Ambles refused to even put his feet in. This shelter is again like the Beavis design with the same setup firewood storage shed for Ambles to get a campfire going. Cute little Snail Orchids line across the front of the shelter like they are ‘chatting’ to us. Daisyfish was last in after 4pm, having a most enjoyable day with long rest breaks & getting some swimming in. Some people walk back in to Karri Valley Resort for dinner as it isn’t far away – 2 odd kms. But we can’t be bothered. Got our backcountry meal, the last of our vino & honey whiskey. 😁Tomorrow night a pub meal awaits us in Pemberton! Poor Ambles & Lindsay were looking miserable at the picnic table, both suffering different ailments. Lindsay has suffered bruising to his ribs after a fall days ago so think that was hurting him a bit. Ambles has his bugger of a cold with a headache & annoying cough. He was so drained he went to bed at 6.30pm.  He was like, “How did I get a cold out here?! Not fair!” I stayed up awhile longer by the fire reading before snuggling into bed. 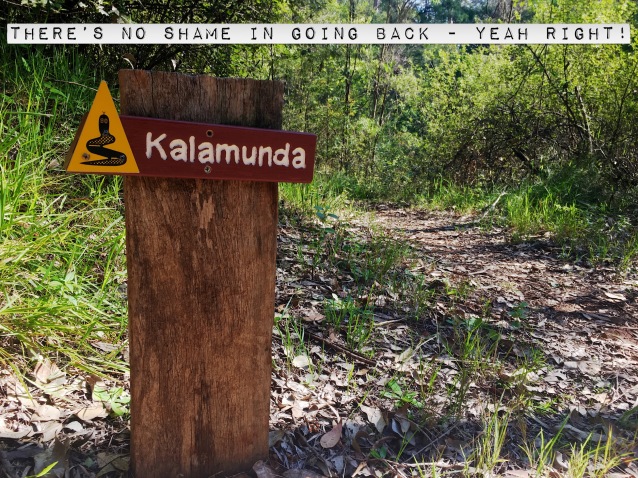