Everyone was up at 5am, town day! The temperature had plummeted drastically from 2am, it was so cold! Close to that minus 3 degrees I would say. Lindsay left first at 5.54am, he planned to get in by midday or sooner, find a telly somewhere & spend the afternoon watching the Rugby. A huge Rugby fan, there was 3 matches on this afternoon. Daisyfish wasn’t far behind him, pumped about getting into town to see her son & partner. She had accommodation already arranged just out of Balingup. Wayne, Deb & Mel were the only ones to be woken up at 1am by the sounds of someone banging pegs into the ground. Mel said, “It sounded like someone was putting a tent up or something! Or chopping wood!” Wayne said he heard a dog barking. As there was no extra tent around, we all assumed that someone must be down by the river where Wayne had gone yesterday. Deb & Mel were next off. Wayne was last, drying out his tent as we finally left at around 6.45am. Geez, today was another long day – 22.5kms into town.

I said this part was with some hills, but the others were like, “Nah! It’s flat! Gonna be an easy hike in, just long!” Did have some uphills to it. And one kickass big hill with a steep descent on the other side. Not far along the track I startled a big Emu, thought he had run away but he circled back angry with my presence. Started making warning grunting sounds & stomping his feet. I kept still but I think he moved on, Ambles came by & with now two of us, Mr Emu had truly disappeared. It took so long to reach town with Ambles constantly stopping & readjusting his Aarn. But he couldn’t get it right & was suffering with weight on his neck. One point he was so far behind as Wayne caught up to me, said he helped Ambles with his backpack & hope it’s better now. Off went Wayne southwards & two women northwards going to Grimwade for an over night camp. Ambles did catch up, set off again. He missed a left turn Waugal marker which I had to stop him & turn him back around. Funniest thing, we see Wayne coming up the hill where Ambles had been headed. Cursing to the max as he missed the turn off had gone another 2kms down, up & down & arrived at a paddock. He was so mad he grabbed a big log sticking it across the road so no one else would go pass the marker. Ambles said the farmers probably move it but Wayne said, “I don’t give a fuck mate!” He was in a foul mood, was talking to his girlfriend last night & she incinerated he was meeting another woman in Balingup. So after more curses & adjusting his backpack some more he stormed off ahead. But we caught up to him having a cigarette at a junction. He said, “Nothing going right today mate! Was doing 6kms an hour & made good ground but now everything is coming unstuck so gonna slow down now. Get into town when I do!” Again we stopped for a light lunch & Wayne leap frogged ahead, this time we didn’t see him again. 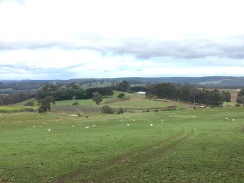 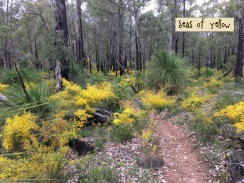 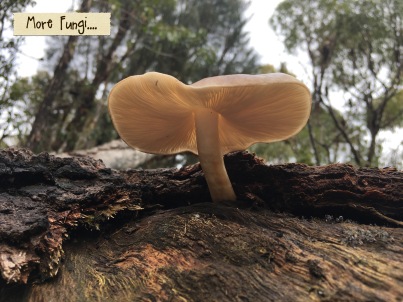 So our lunch break was before that kickass bad hill. I trooped up it but had to sit on a log to recover at the top. Then went down the slippery steep descent to the Balingup Brook valley bridge where I sat & waited for 25 minutes for Ambles & I was getting cold! Poor Ambles, not only did he have to keep adjusting his backpack, but he has had a sore toe now for a few days. Today it was hurting a lot, especially on the descent. He doesn’t know if there’s a blister underneath or he will lose a toenail. A long day was turning into a longer day as we made slow progress with Ambles still suffering with his backpack & toe. The walk into Balingup seems to take forever a long squiggly walk, with markers missing at intersections so I guess & take one path to find out it’s the other path. Besides it taking so long to get into town, we had lovely cool weather & the walk in is very pleasant besides brooks, streams, pine tree groves. And lots of wild rabbits hopping around. We had another lack of markers & took a different road into the Main Street to the Visitor Centre where I signed us in & Ambles asked where to get accommodation. Now it was 2.45pm & we had passed Deb & Mel, they had got in at 12! Wasn’t Reagan Bailey at the visitor centre, she is always on the Bibbulmun hikers Facebook page, but a volunteer lady called Lila. She was most helpful. Everywhere was booked up but she said her cottage was available tonight only then she would find other accommodation for us tomorrow. So we settled on that. Her cottage is lovely, only 5 minutes walk from town, fireplace heaven! Lindsay is in the cottage right next to us but was at the pub watching the rugby. Lila was so lovely, fetching us fresh milk, fresh homemade bread, butter, eggs & homemade marmalade. And came over with a foot dish & Epsom salts for us to soak our tired feet into. And I can use the washing machine & dryer all free! Balinga Cottages – was meant for us! 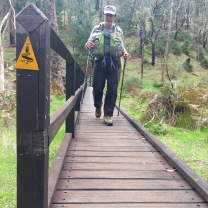 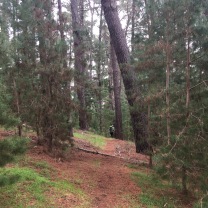 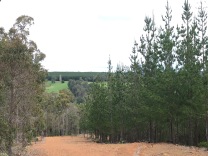 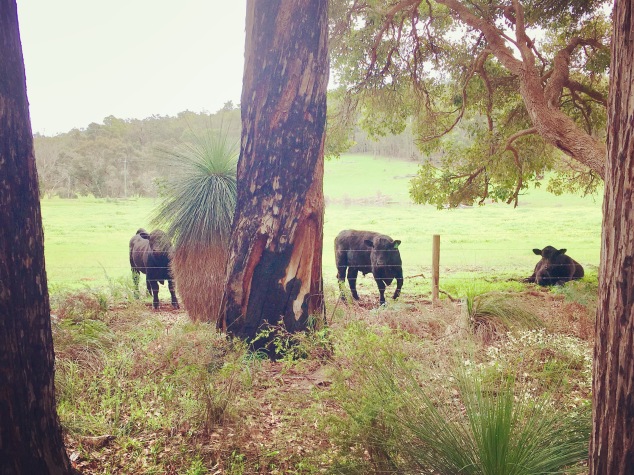 Wayne phoned Ambles to say he was at some lass’s house getting a good soak in a bath on the veranda & won’t make it in to the pub for dinner. 🤔 He said he passed Daisyfish on that kickass last hill. She had fallen asleep on a log so he woke her up. We walked in to the pub after we had a good shower, I was starting to go off my own bad BO especially my armpits Phewwww! Lovely little Tavern, Lindsay was sitting there on his own in front of the tv watching the rugby still. Deb & Mel were having dinner & invited us to join them. The steak was good, Ambles had lip smacking pork ribs. Mel plans to cycle the 3000kms from top of north island NZ to bottom of South Island next year. And if she likes it may plan to walk it next time. These two ladies only a couple of years younger than Ambles show no signs of slowing down! As we have walked 400kms so far, Ambles shouted us all Baileys shots ( As the Tavern didn’t have port ). Deb & Mel head out tomorrow but staying 2 nights in DRV so we will catch up with them then & walk to Pemberton together. I really enjoyed this whole section from Collie. So much variety, wildflowers & the Mumby Pub! Great company on the track too! It would have been a different experience if we had done the Welly Spur Trail. The icing on the cake came when Lila rang Ambles to say she had Sunday’s booking cancel so did we want to take 2 nights in the cottage. Yes! The Trail provides 😁. 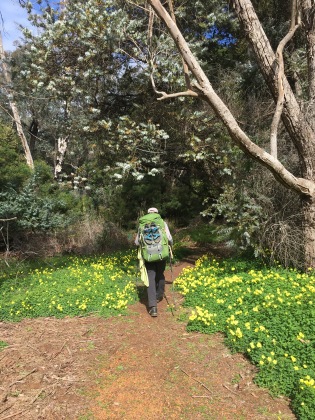