12/9: The nights have gotten warmer, the early mornings not so bad, don’t need my beanie, gloves, leg & arm warmers at all. Just a shirt & shorts. We were up early again, eager to get going, arrive at lunchtime at our destination. Our walking pace has definitely increased even though Ambles says we do 3kms an hour, it’s more 3.5 to 4kms an hour depending on the terrain. Dookanelly was another 19 odd kms walk away. Wayne came down swearing & cursing about his tent again before we left. Threatening all sorts to the staff at Anaconda for selling him rubbish that doesn’t work. He is doing well for never done a multi day hike trip. Now he was like going pass Collie to Balingup all confident like, “ Man, when I get to Collie, gonna sort my gear out & get good shit then keep going to Balingup I reckons!” 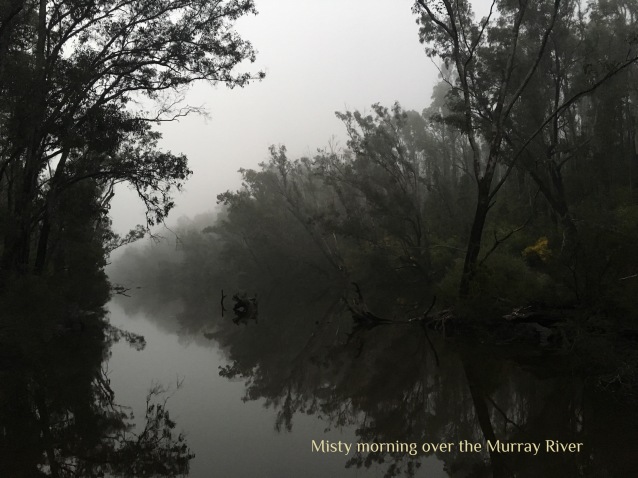 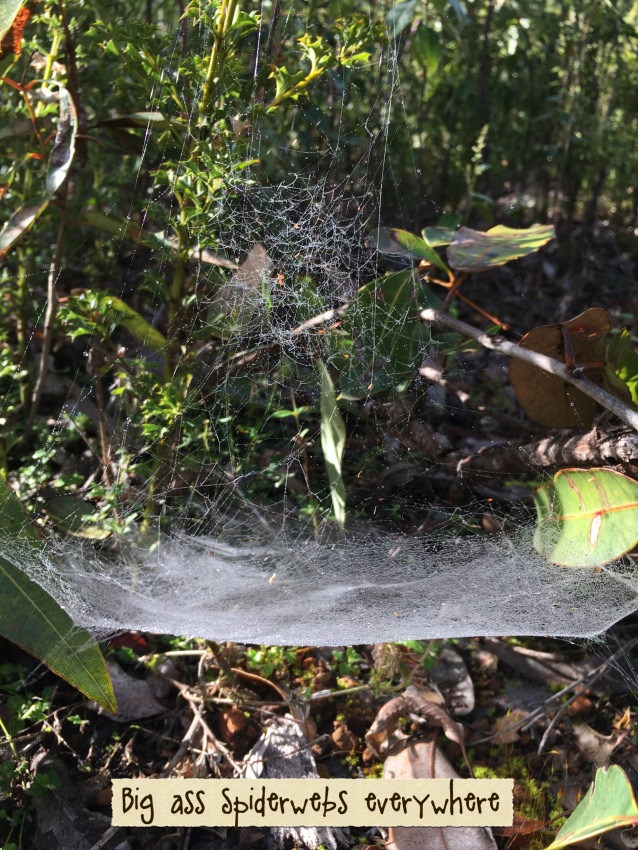 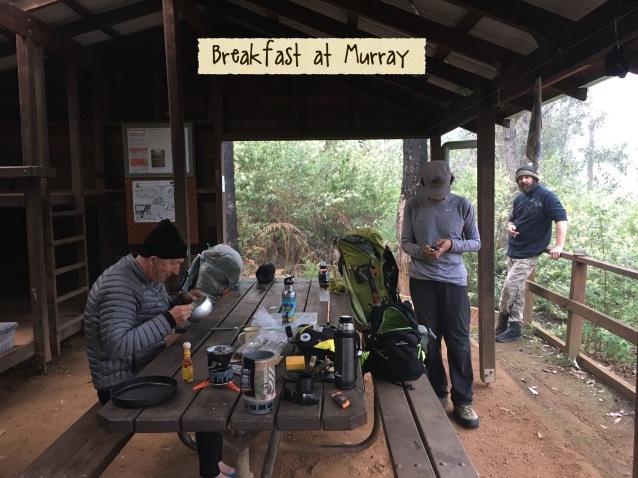 It was a sweet misty morning over the river & up the hills when we left. I love how the mist changes the feel of the track to one of more mystery. The spiders must have a field day during the night, as I was in front, I had to break all the spiderwebs across the path, literally hundreds of spider webs! And all along the sides hanging in the bushes. Probably had spiders in my hair, not worth thinking about! Not only that, the first 7kms was heavily overgrown I was ninja Rose attacking branches & spiderwebs with my poles. My clothes got soaking wet from the overgrowth brushing against me. Some of those bushes were prickly like scratching my exposed legs & arms. In fact I turned at one point to Ambles saying, “This Track is pissing me off!” After 30 minutes more I found some small clearing & a log, sitting down & cooling off. Needed to gather myself & recharge my batteries. Then I could continue, the track did get better, the sun did come out, things were looking up.

The river was hardly seen even though it was right near us. The bushes were too overgrown. One little lady traveling northwards in her yellow rain jacket with the hood over her head passed us making small talk. She was finishing a section making her sectional end to end complete. Later Wayne said she scared him appearing out of nowhere. We had a good chuckle over that. 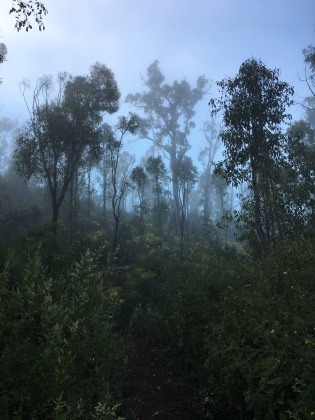 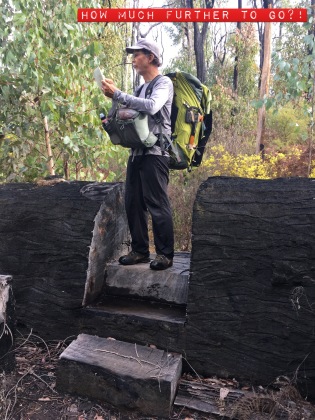 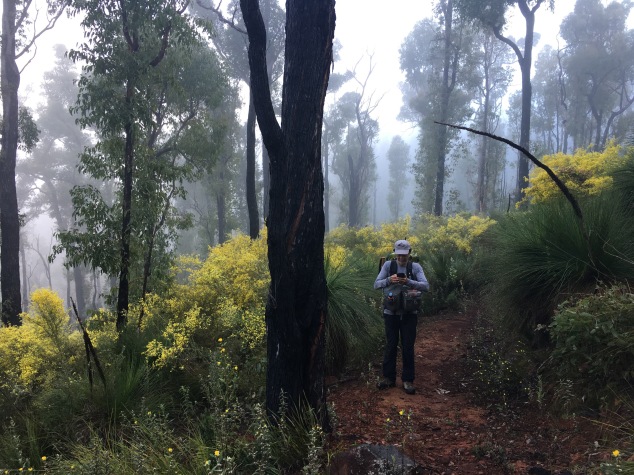 Once we passed Driver road, we knew we had 3.5kms left. But that involved some kickass long hill climb on ground that was slippery underfoot in places. The sun beat down on us as we sweated our way to the never ending top of the hill, finally to go down the other side & into Dookanelly. Which unfortunately has no river or water nearby. So I gave myself a towel wash my legs red, scratched up & dirty. Wayne was not far behind us when he came swinging into camp. He was utterly delighted with himself, “Man! I powered through today! All those overgrown bushes! I used my stick as a battling ram & pruned the shit out of them! I almost caught up with you guys! Fuck, I reckon I’m gonna go all the way to Albany now! I’m loving it! But I still have too much food! That Jayn man got in my head, but now I’m chucking those lolly packets into the box & someone else can have them! And those heavy curry packets. Don’t need extra weight! Feel like dumping the shit tent here as well!” He ended up deciding to sleep in the Shelter with us. Saying if he snored, then throw a stick at him. I think he is getting through with a lot of help from Panadol & Anti inflammatory cream. His toe was still sore but not slowing him down in the slightest. Jeremy was next then Dave & Jayn whom had a leisurely sleep in & didn’t leave Murray camp until 9am. 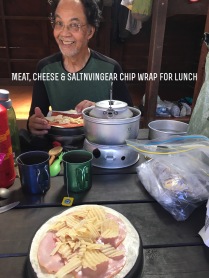 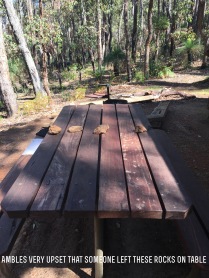 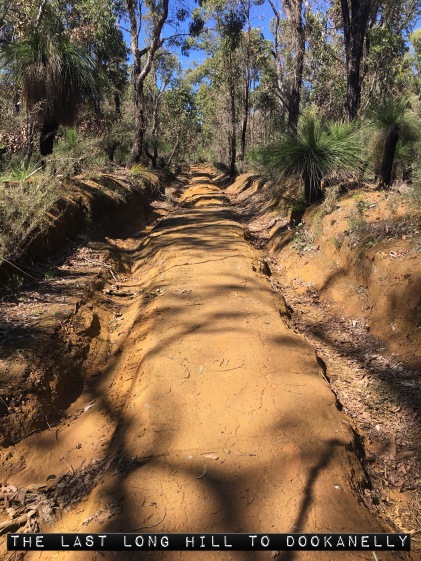 We all had another quiet relaxing afternoon some reading, some nonstop talking, Ambles running about making a nice campfire for all of us. We all chatted until about 7pm besides Jayn whom disappears off to her tent early. She really says very little but Dave likes to chat & mentioned how they did the AT in America. They really are avid hikers & adventurers & have their pack weights down to an art form that suits them. Their packs probably around 12kgs max, probably less than that. Ambles’s Kindle brand new, cracked a sad & all his reading books he had downloaded were gone. Vanished. Confused & annoyed he was couldn’t read a book! Is it a full moon? It was pretty bright that night.