This is a popular 3 day section hike along the Bibbulmun Track that we decided to tackle over the September long weekend. We drove down late Friday, staying in Donnelly River Village in the old school room called the Bunkhouse – a cheap accommodation for Bibbulmun hikers to use. There also is a free Donnelly River Shelter which is just a concrete shelter with a table in it & toilet block nearby.

Saturday morning we set off early at 7.15am, leaving the sweet tranquil village spot, once a timber milling town with its friendly kangaroos & emus. A sign heading out read Gregory Brook Shelter 21km. The track wide, easy to follow through the beautiful Karri Forest. Along the way we pass a sign saying welcome to the Blackwood District. The change is noticeable from the well maintained Donnelly District track & the neglected narrow track through Blackwood. There are fallen trees, branches everywhere & the ground littered with a thick pile of fallen tree leaves & pieces of fallen tree bark. The track followed an old railway formation pass Willow Springs Camping ground where we stopped & took advantage of the picnic tables to have an early 11am lunch. We encountered one hiker travelling South to Albany, he complained away to Mr D that the shelters were not adequately spaced. 20kms was too short & 40kms too long. He hated single hutting to arrive at midday with nothing to do all afternoon. 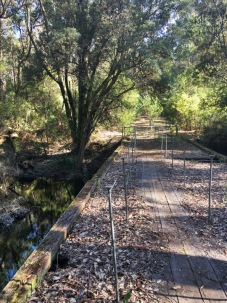 As we were travelling north, I didn’t expect anyone would do the same, but as it turned out, a family of four & a mother & daughter pair had the same idea as us. Mr D struggled the last 4kms, almost stepping on a big black n brown snake. He let out a scream, caught off guard. The track elevation was relatively flat with few uphill & downhills. I arrived first at Gregory Brook Shelter at 2.45pm & met the family of four, Diana, Jerry & their two young adult daughters Abby & Tegan. This shelter is blessed with a beautiful bubbling brook stream called Gregory Brook of course! Right close by with freezing cold water that we bravely plunged our tired hot feet into. As the temperature dropped we huddled around the campfire, the mother & daughter duo turning up just before nightfall. They had walked in the last 4kms same as the family had & this was their first multiday hiking adventure. And how could it be, but the mother wore the exact same boots as I! These boots you can’t get in Australia so not widely seen here at all. We were so exhausted we were in bed by 6.45pm & slept all the way through to 6am!

The views this morning was breath taking beautiful, the forest shrouded in early morning mist. It sounded like rain but was the dew dropping onto the shelter roof from the trees. We had our brekkie, packed up & were heading north again by 7.30am, through the dense forest & mist. Mr D failed to see a turn off & continued along a dirt 4WD track until I noticed & alerted him to turn around. On we continued through narrow tracks these ones more maintained than yesterday. Stopping for a cuppa tea break on this 18km section, we met another southbound hiker, a man with an eccentric personality that kept warning us of all the snakes around. “Shit loads of tiger snakes up ahead!” His name was Kain, & indeed after continuing along only 5 minutes, I spotted a small snake that had come out to sun itself. Then Cliff came along, a through hiker from over east. He was more down to earth & told us not to take anything Kain said too seriously.

The day was heating up as we caught up with the family & continued around Millstream Dam & down a long steep wide 4WD Road that kept going downwards forever until we eventually reached & crossed Blackwood River. We were getting hot feet & tired, stopping for a late 1pm lunch above the Blackwood River sitting on the leaf covered ground. We watched Kayakers go pass & fought off ants. Not having too much further to go we continued along, crossing through gates onto private property – the historic Southampton Homestead. Golden Retrievers came up to greet us as Mr D fed grass to the horses on the other side of the fence. Straight after here was the final assault – a steep ascent up Cardiac Hill. Named this as a person once had a heart attack on this hill. It was hot, I sweated profusely but reached the top & over spotting Blackwood Shelter with joy. I was the first to reach the shelter, followed closely behind by Mr D & then the family.

The Blackwood Shelter has prime position with excellent views out over the valley, the river & farm houses far below. All the trees have been removed unfortunately & the area around the shelter is quite bare. There had been a terrible bushfire years back where the beautiful trees that surrounded the old shelter had fallen down or too high a risk of falling down, the shelter destroyed & so a new Shelter was rebuilt further downhill & trees removed, leaving only tree stumps to prevent further problems. It was still quite warm & the night was going to be humid. Two more through hikers joined us for the night, only they decided to tent away from us & sit out at the other table. It was getting after 5pm as Mr D & Jerry decided to troop back down Cardiac Hill, worried for the mother & daughter duo that had not arrived. They all returned just before 6pm, the mother was struggling & would not have made it up the hill if Jerry hadn’t taken her backpack for her. Campfires are banned here so after dinner & some chatting with the mother & daughter, we crawled into our sleeping bags. It was an almost full moon & very bright. One didn’t need a torch to go to the toilet during the night. 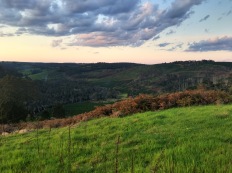 We awoke to a new day, legs sore, muscles complaining. There was slight mist about but nothing like yesterday. We set off at the same time as the family around 7.30am. The mother & daughter just starting their breakfast, the two through hikers starting to pack up to head southwards. Descending the other side of Cardiac Hill was pleasant. Very green, grassy with beautiful pine trees growing in rows. Once off the hill, we followed an easy 4WD track to a private farm paddock. Only Bibb walkers can go through the gates & walk amongst the farm moo cows that were annoyed by our early morning arrival & started running away & mooing loudly. We followed more 4WD road pass a couple of farm houses & then the track went into pretty forest again with the most amazing variety & colour of spring wildflowers seen along the entire way. Mr D set off in front but ended up behind me as he had again missed a waugal turnoff & continued wrongly for awhile before realising. Then he was exerting himself to catch up with me, looking quite frazzled & out of breath by the time he found me. On we continued through the pretty flowers opening out to a farm paddock & a seat with great views not to be missed.

We set up a cuppa tea as other hikers came along & eyed off the bench with longing. This part of the track pairs with the Greenbushes loop trail & there were a few day hikers on the loop trail. One southbound lady hiking to Pemberton stopped & joined us, she was looking forward to the seat & was not going to let us have it all to ourselves! This lady also had the same green backpack & green cup as I! The family came by, but continued on – another couple of seats were required! 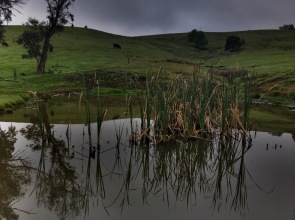 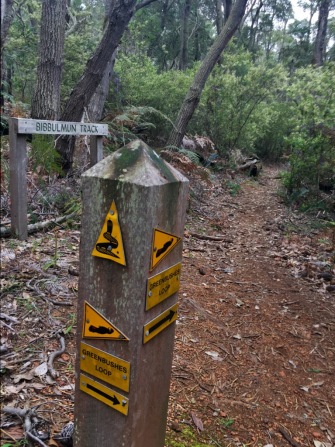 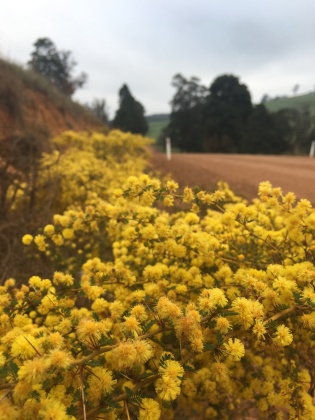 We took an hour break chatting away to these 3 hiker women before continuing onwards. Coming out of the forest, we crossed the railway tracks then took a long walk up another 4WD road to the south end of the Golden Valley Tree Park, just on the outskirts of Balingup, a lovely picnic spot with fruit trees & small lakes. There we stopped to have lunch in the large gazebo. The family had their car there, had changed out of their hiking clothes & were having lunch so we sat & joined them. Afterwards we said our goodbyes. They headed off south in their car to pick up the second car, we continued the 1.5kms into Balingup making it a 17km day. The day had gone from cool to warm as we celebrated with a cider at The Packing Shed. Then it was calling our track transfer driver to collect us & return to DRV where we stayed the night this time in one of their cottages. This whole section is very nice, the landscape changes all the time. The terrain easy enough to tackle. Day 3 showcased the best array of wildflowers & spotting of orchids. DRV is a great spot to access not only the Bibbulmun but also the Munda Buddi. We caught up with Kain & Cliff as they were staying in the bunkhouse when we arrived back. And meeting fellow hikers makes the experience even better I reckon! 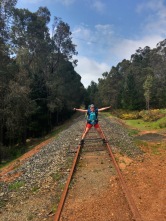 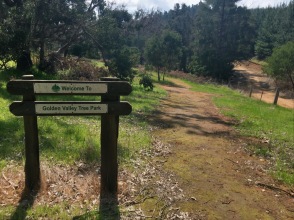 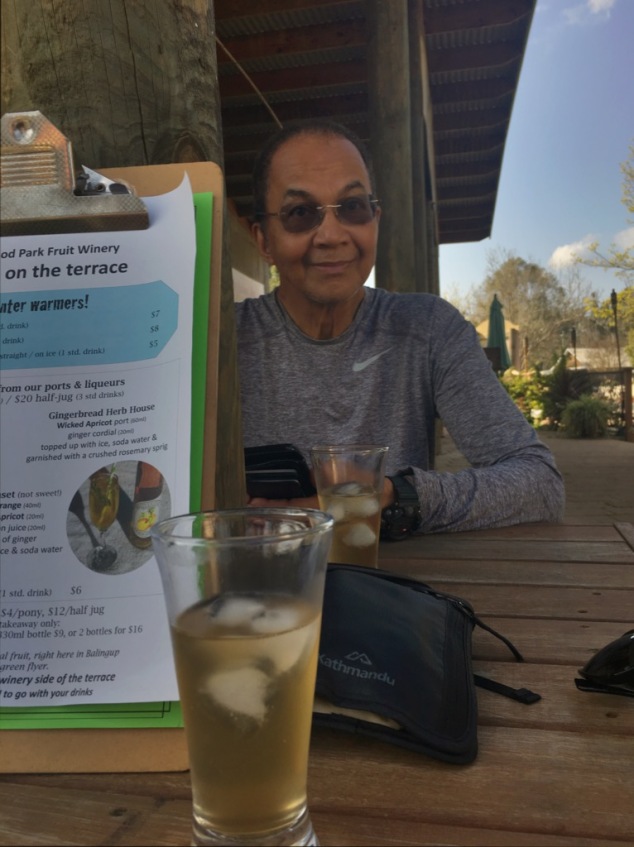