We tend to sleep in just a little these days, feeling tired every morning & evening. We would have scheduled a rest day if Santiago wasn’t forecasting hot days from the 10th of November. Unseasonably hot days 30 degrees & upwards. As we all know, Mr D cannot stand the heat! That’s why we prefer to get in Thursday, also because Mr D has ‘been done’ with this walk for a couple of weeks now. We have been walking 6 weeks & 1 day now. So we got up, packed up & headed to the nearest breakfast bar. George was packing up as we were leaving & recommended the bar to the right on the Main Street.

We headed over there in yet another freezing cold morning, heavy mists over the town. We got our toastadas in & were loading up to go when George came in. He was talking to David on the phone. David & Sioux went an extra 9kms along yesterday in bitter cold & rain until they found an Albergue. So today they were walking close to Santiago so tomorrow is a short walk in for them. George was saying the backpack transporting is quite cheap & costs him 5€ a day. The only problem is the Albergue he picks has already closed for the season. So when he gets there, he has to go find his backpack that is normally sent to the nearest bar or another Albergue. Today through, his backpack arrived at an Albergue that is still open. So he said when he got there, “I’m home!” 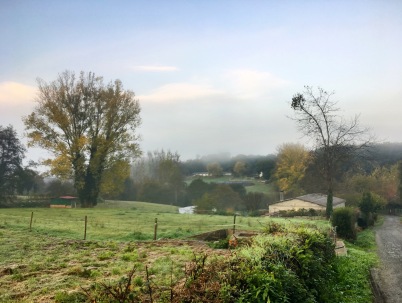 We were on our way by just after 8am. It was so pretty walking through the heavy mists & fog, I could hear the cars but not see them or the road as the fog was so thick. And there was many more Pilgrims today on the track. Everyone seems to have slowed down. Maybe tiredness or perhaps as they rushed through & now they realise they are close to the end, they are slowing down. We went through some more woodlands & out on open pasture lands with farm houses scattered about. We passed one man that was carving out his homemade wooden walking staffs for sale. He is use to working outside in the cold then! In two spots I came across a car with two women standing next to it waiting. Judging by the words on the car, it is like a transport car for people walking the Camino. Mr D said he saw a group of guys get out of the car & start walking. We were walking along passed the wall of wisdom which is a long line of religious & spiritual quotes on paper stuck to the wall, as George caught up to us & we continued walking together chatting away. 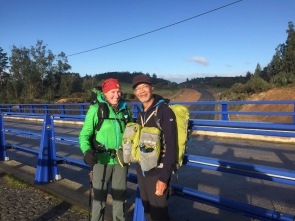 We stopped in at the first cafe open after 8 odd kms at the Casa Calzada. There all 3 of us had our morning tea. The Darwin Australian couple came in & another couple from Perth that we hadn’t met before. Me & George went & checked out the souvenirs in there & selected some bracelets. George selected one in the middle so pulled half of them off to get to it. Then he was, “oh well, don’t want to put all these back on – sorry girls.” ( Jobs for the ladies working behind the counter. ) And there are now bins along the path & people use them! Only for this last 50 odd kms is the Camino litter free.

We continued on our way through more tall tree woodlands on our own as George had gone ahead. We passed through many eucalyptus trees that got Mr D singing out, “Give me a home among the gum trees, with lots of plum trees, a sheep or two, a k-kangaroo & all we need now is some koalas in the trees!” The day had started mighty nice with blue skies once the mists had lifted. But rain was coming in again. Only a short period of light rain, as we popped open our umbrellas then easily stored them away again. Umbrellas come in handy in this case. We went through one town & came across a man made beer garden. So many empty bottles of beer decorating the trees, walls, bushes & people had written on them. That’s fine, but as George says “They shouldn’t graffiti the markers with stupid words & stuff. That’s like me going to someone’s front door & scribbling on it; ‘George was here 2017. Buen Camino!'” We passed him again as he sat on some steps of a cafe eating an ice cream & Pilgrim watching. He later told us his knee was hurting & he was struggling with walking today.

The walk was easy today on mostly dirt road pathways with slight inclines. We got to O Emplame by around 12.30pm & picked a lunch spot as there was several by the roadside. We went across to the restaurante Parrillada Andaina & ordered two pizzas & 2 cokes. I added on an egg custard dessert. We saw George walk by on the other side of the road & called out to him but he didn’t see or hear us. Then I went to pay & had to wait around which was annoying. The Comedor was busy with all these local Spanish work men coming in for lunch. So the two waitpersons were busy in & out. Mr D finally got the ladies attention so then had to wait some more for the bill. It should of been just under 20€ but I got ripped off & was charged 25€. I just paid it so we could get moving. Mr D later said if he wasn’t so keen to go he would of argued the bill with the lady.

We only had another 3kms to go as the rain clouds unleashed some more rain that lasted about 20 minutes. We passed through some nice moss covered forest & through some tiny town with old stone buildings until we got to Pedrouzo, where we had to leave the Camino to walk into it much like Portomarin. It took awhile to find accommodation. In this case, it was easier to get into an Albergue bunk room than find a Pension. There were quite a few Pensions around, but each one we went to was closed! We spotted George enjoying his late lunch in a bar. He was over at the bunk room Albergue & wanted us to join him. Mr D was eager to get his pack off & George must of been upset at our abrupt departure as Mr D tried to find him later as he felt bad, but George was asleep in his bunk bed. Later he said he was watching videos on his phone & it probably looked like he was sleeping. 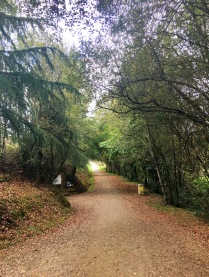 We walked & it drizzled some more with rain. Finally we chanced on Pension _9_de_Abril which we had to buzz reception from outside & had no answer. Luckily a young lady came along & let us in & showed us to the reception floor. There we waited while the man inside was dealing with another arrival. Then it was our turn. He had one room with ensuite bathroom so we took it. He was trying very hard to communicate with his bad English but at times I couldn’t understand what he said. He was very helpful & friendly & went through the Santiago map with us & the cathedral mass times. He was delighted when we said we had come all the way from SJPDP. He shook Mr D’s hand saying, “Congratulations! Tomorrow when you arrive in Santiago square, you would of completed 800kms!” Mr D was stoked at his first congratulation. The man expresses how he likes meeting SJPDP Pilgrims over the 100kms Pilgrims. We are happier & smiling probably as we are so happy with our accomplishment. The latter look tired & non-smiling. When he checked my Australian passport, he goes, “Your Birthday is in 4 days! What better way to celebrate than here!” 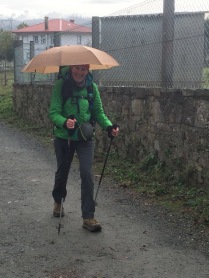 We settled in for our last night on the Camino. Mr D hand washed a whole heap of clothes & socks in the bathroom sink & hoped they would dry on the heater rails in our room. Ahhhhhhh – shall I miss these hand washing days? Fat chance! Our room is so warm compared to last night when our room was uncomfortably cold. Mr D was keen for a drink so we went out for wine & beer. That’s where we tried to get George to come along. Pedrouzo is similar to Arzua on a main busy noisy road which is difficult to cross with so much car traffic going by constantly. Then to the supermercado to buy cheese, chorizo & little cakes for morning tea / lunch on the go tomorrow. Mr D brought a bottle of cream liquor. He thought stuff it! We will drink some tonight & then he will have to carry the remainder to Santiago. We goofed off down the street singing & dancing, looking like a right old crazy pair, especially me in my famous bright red SKINS tights that turns heads. “We’re happy little Vegemites as bright as bright can be, we love our Vegemite for breakfast, lunch & tea, we also love our liquor! Hahaha!”

Mr D realised we had no cups & we had passed our Pension without realising. Luckily there was a supermercado just ahead as Mr D went in & brought a pack of plastic cups. Back in business, we ended up drinking some liquor with a happy Mr D playing some blues music & having a dance around the bedroom before he exhausted himself & fell asleep! I had to wake him up so we could get some dinner! We found George at the same bar he was at earlier & joined him for dinner & Montserrat came in so George invited her over to our table as well. We briefly met Montserrat a couple odd days ago, she was walking with David & Sioux. The next day she was walking alone. She is one of the few Spaniards we have met doing the Camino. She is a warm & friendly lady, she would be younger than me, that lives in Barcelona. She had started on the 3rd of October from Roncesvalles. We all mainly discussed how tired we all were. We all had enough & were looking forward to finishing in Santiago tomorrow. George had more unfortunate stories to tell of his Camino journey. If he wrote a book it would be an interesting read indeed! Mr D laughed as I was saying we have a lot of Kiwis that move & work in Oz. They thought I was saying lots of Kiwi birds working in shops & stuff! No wonder they had confused looks on their faces! I had to tell them New Zealand people are referred to as Kiwi. It can be difficult sometimes to communicate! We all said our good nights as we will see each on the road somewhere tomorrow. Big day tomorrow – we will have ourselves a little ‘night cap’ of the cream liquor so we sleep well! 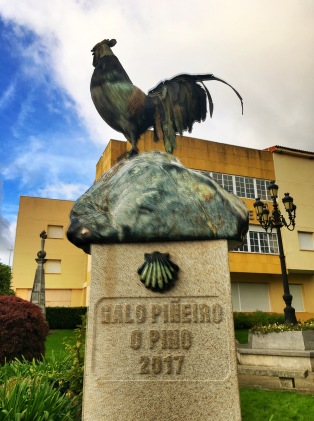