We are still tired peoples. Mr D was kept awake to after midnight due to the party going on upstairs in the restaurant. There was loud chatting & chairs scraping across the floor. He said he actually went up to see what the hell was going on & glared at the people keeping him awake! He also had a panic attack about bugs in his sleeping liner so he sprayed his silk liner again & out crawled a spider! I fortunately slept through it, however was awake a couple of hours early morning feeling so damn itchy all over. I had slathered on tea tree oil before bed so there was a strong aroma in the air! When Mr D interpreted my sleep in with, “It’s 6am, we get up now.” I snapped back, “We didn’t discuss the time! I’m not getting up right now!” So he knew to leave me alone. I got up at 6.30am very reluctantly. I wished to stay in bed all morning.

It takes too long now to get ready as we have to apply medicated cream all over ourselves & now I have red spots on my face that stick out like dogs balls! Feeling self conscious & down in the dumps I’m afraid to say today. We had breakfast in the restaurant – Mr D’s favourite plain crossiant made a comeback haha! But then he paid when I went to the ladies restroom & we have a routine that I pay everything & he is the bank. But he didn’t tell me he already paid & I was demanding to pay for breakfast & not understanding the young ladies not good English. I got annoyed with her until I understood her. She said, “Boy paid”. Ok then. I was eager to get going after that. 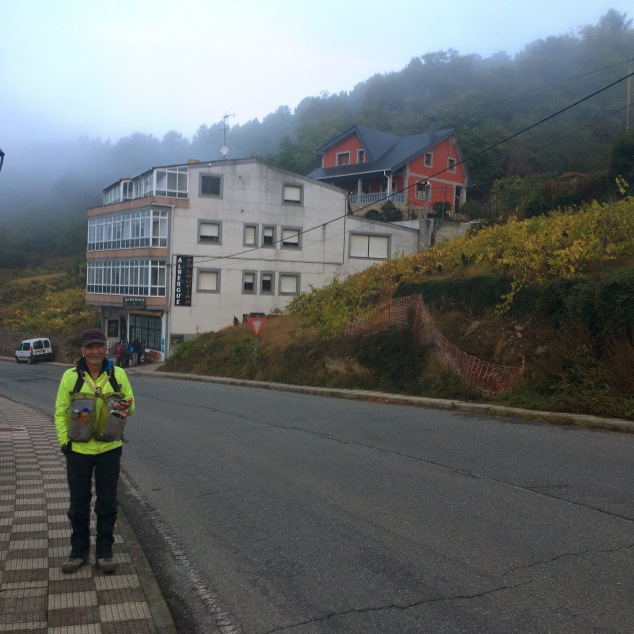 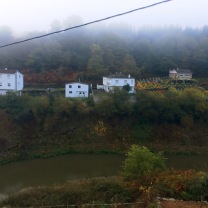 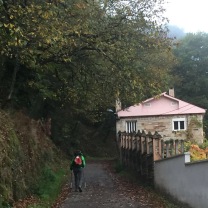 Straight out in the chilly morning, low mists enveloped the town of Portomarin as a whole train line of Pilgrims left, walking back over the bridge & straight up a hill again. I took it easy & let people pass. Their loud chattering voices were annoying & I just wanted peace & quiet! This section isn’t at all like yesterday’s & I found it rather dull in comparison. We tended to follow the road a lot or be on the road. And there wasn’t much views to look at so my camera didn’t get as good a workout. I noticed ‘wild sheep’ was back after being absent for some time. Who is wild sheep? Well that was the question on many people’s minds in the early days when the graffiti tag appeared on every Camino marker. In fact, there’s so much graffiti & vandalism on the Camino markers, street signs & such. It’s a real shame.

We ended up going 7 odd kms until we saw an Albergue cafe open in Gonzale & stopped in for a hot drink. The day had started quite pleasant, cloudy & blue skies. But the wind had a certain chill factor. Sitting at the cafe was the sick man whom wasn’t sick any more. No tissue stuck up his nose. But he was having a deep conversation with a lady about mortality, life & death. It was too depressing as we quickly finished up & headed off. But the not sick guy stopped Mr D to ask about his Aarn backpack so the getaway wasn’t so quick & easy. 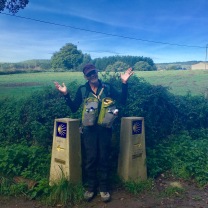 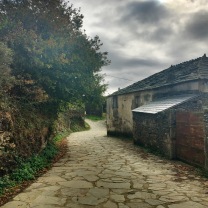 A group of 3 light packers had a dilemma just before the cafe as one had hurt her foot or something. She was sitting on the ground with her shoe & sock off. A kindly Spanish local driving along stopped to see if she needed a lift. Not sure what happened with them as we continued another uphill stint passing what looked to be a human poop on the side of the path. It takes all kinds out here…. 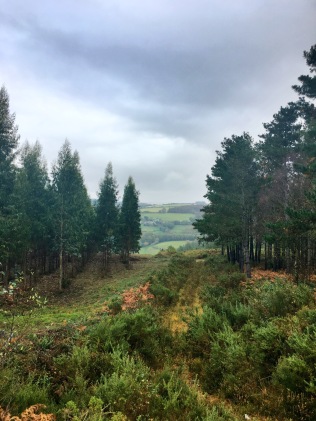 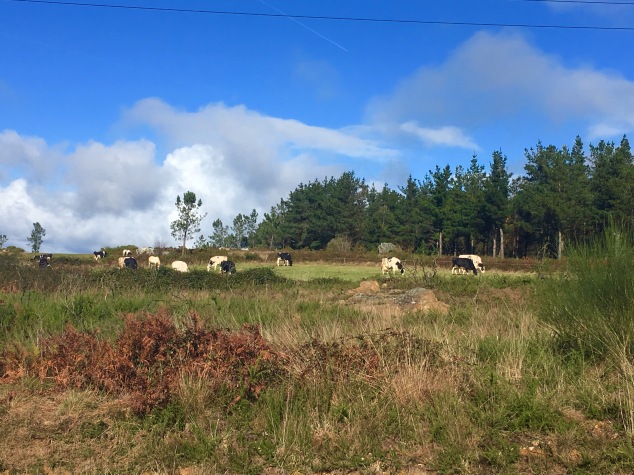 A group of annoying loud Italian light packers were behind us, I slowed to let them pass but then they stopped for a break. We saw them later as they pulled out in front of us, luckily they moved fast, their loud voices disappearing in the distance. One brave little mutt started barking & chasing a Pilgrim cyclist through town which was hilarious. We headed down into the town of Ventas as Galicia turned on some waterworks for us. Just a drizzle rain but we were coming up to another Albergue cafe & it was almost midday as we ducked in for lunch. Cokes & a simple hamburger which was really a cheeseburger. And a side of Patatas bravas. I tried them again but the ones in Santo Domingo were great & no one else makes them the same unfortunately. Again the chilli sauce was too hot. This one had no white sauce with it. The not sick guy had also stopped at the table next to us. Kim came in & sat talking to him. Mr D laughed, he said Kim was pretending not to notice us. So he waved at her so she had to acknowledge us. Don’t know how we may of offended her but anyway, don’t cares if she don’t want to talk to us!

As soon as we left, the clouds were coming over again & dumped more rain on us. I had to fish through my backpack lid to get my bag cover out & rain jacket. By the time I had done this, it had stopped raining – typical! At least I started feeling better again as I cracked jokes & acted silly. Not sick man pulled out behind us from an Albergue in town. Was he heading to the same Albergue as us?! We had overheard him say he was only doing 19kms like we had planned. We were headed to Portos to an Albergue called A Paso de Formigo – Ants Way! And it looked a nice hamlet in a quiet rural countryside. But the buggers had closed for the season already! There was a group of 4 people outside there disappointed as well. Now I get the Ants Way – they have several large metal Ant statues in the garden. 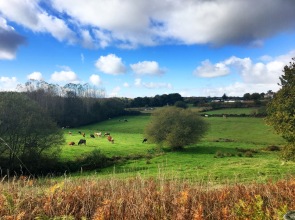 So we had to continue onwards, much to Mr D’s dismay. He was a very tired boy & in need of a rest. We only went another kilometre & Mr D spotted a Casa Rural – Rectoral de Lestedo in Lestedo, a town of not much really. But the place had an open sign up – very promising. A very nice looking home where we payed a lot for a private bedroom with bathroom. We didn’t care as we didn’t wish to walk any further. Our room has two single beds separated in the middle with a side table. The bathroom is a bit grotty & smelly but the bedroom nice, sheets looked cleaned. Mr D anyway was not taking any chances & sprayed his insect repellent over both bedding & pillows. Then all we had to do was rest up! Drink vino, eat some yum cheese from the house owner’s & wait for dinner in a nice sunroom. Outside the temperature dropped to below freezing, two guys walked past with their big backpacks at 5.40pm – I will never understand these people that walk till late in the day. Mr D got a sloping bed again. Not wanting him to put his back out as we already have enough to deal with, I swapped beds. 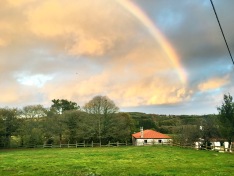 We went for dinner that our house owners were providing. A 3 course meal followed by a liquor shot. It was a pleasant meal with good company. A South African couple by the names of Mario & Adriana that have been walking the Camino Frances since the 20th of September! They too are enjoying the walk, taking their time & going off on a train or car to another place on the weekend & then returning to the walk. We spoke largely about the Camino & other walks, particularly the walks they do in South Africa. Maybe we see them again as they are walking to the same town as us tomorrow & plan to also finish in Santiago on Thursday. During the course of our meals, the power cut out twice plunging us in darkness – well that’s different! Damn these awful itches – hang in there we must – 4 days left baby! 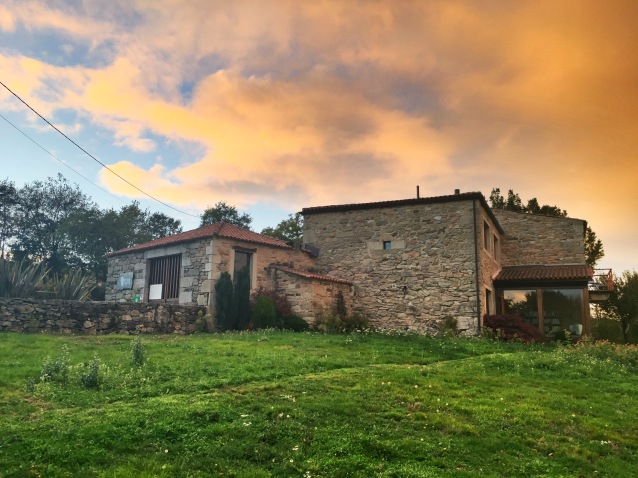