David & Sioux must of gone out for dinner with the two Alaskian ladies as all four trooped back into our bunk room at 9.30pm last night. They were in fact our bed neighbors! The long haired Alaskian lady joked “Who is following who then?!” But I was like “But who was here first?!” They all are nice people, most Pilgrims you meet are friendly with a few exceptions of a few undesirables we have met. Mr D didn’t sleep too well, got up at 4am to attend to his skin issues. We got up to pack at 6.30am which was hard as everyone was still sleeping so had to pack quietly in the dark & bring all our stuff in another room.

The young lady at the Albergue that fixed our breakfast was very friendly, good hospitality again. We had a big plate of small toasts to devour through. David came downstairs with one of our iPhone leads that we had missed while packing in the dark. It was very kind of him. I also remembered seeing a green towel hanging off the window knob next to our beds. It was Mr D’s so lucky I had mentioned it! We hear stories of people leaving some belongings behind; pants, socks, toothbrush, comb. The two Alaskian ladies have each left one of their poles behind, one at a mountain summit. So now they walk with one walking pole each. Now I don’t know how you can forget a pole, the only thing I left behind was my stone at the Cruz. 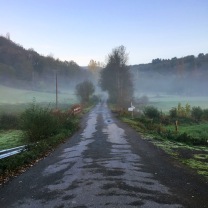 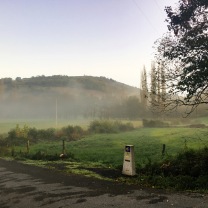 We were blessed with good weather early in the morning. There was the sight of blue skies with some clouds about. The town was enveloped in mist, the temperature on the chilly side. However, as we started to climb again, I soon got too warm, the temperature warming up. There was an increase in Pilgrims going past us today. One set of women were excitingly chatting loudly away as Mr D said, “Its started already! Look at this lot with their heavy 1kg packs on their backs!” The route goes two ways. One way the normal way to Sarria. The other detours around Samos which is popular for having one of the oldest & largest monastery’s in Spain. This path is 6.4kms longer & is mostly via the busy roads. With Mr D’s allergies going on, we stuck to the normal route which I believe would have to be the nicer route to take. 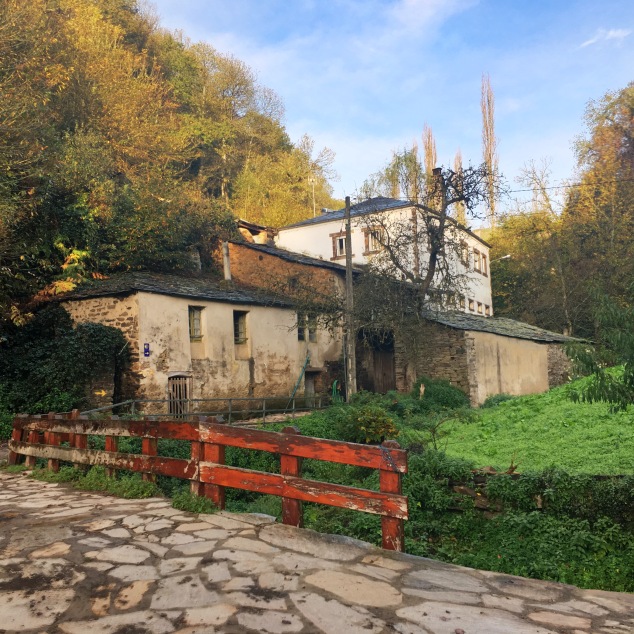 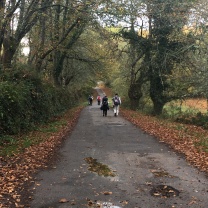 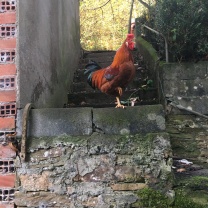 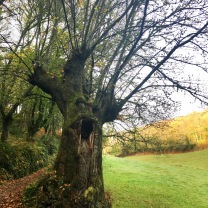 The Camino has put in new woodland paths along this route now. It was very pretty, quiet, lots of farm animals about. The weather can turn & I could see rain clouds closing in. That it did rain but not for long, & not too heavy. One group of cows went by with their farmer on the track, which explains all the poop everywhere! Mr D had briefly spoke to one pair of guys that started in O’Cebreiro. They asked him where he had started from, “SJPDP?! Why you walked so far?!” Because he can! And the cyclists Pilgrims going through were annoying to Mr D as more cyclists came barreling through with no warning on the narrow pathways. 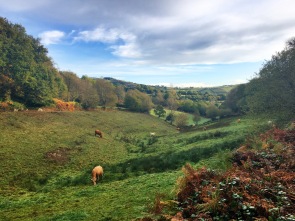 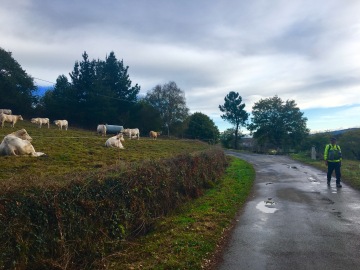 We stopped at the popular Casa do Franco  cafe just before the smelly poop village of Furela for a late morning tea. There the cafe owner was chatting away to a couple of locals that talk so loudly. That annoyed Mr D as well, he has developed a sensitivity to high noise levels & can’t stand these Spanish that sound like they are yelling really loudly to each other, but this is how they talk normally?! One cute little dog was begging at the table for food from Mr D, very cheeky pooch! 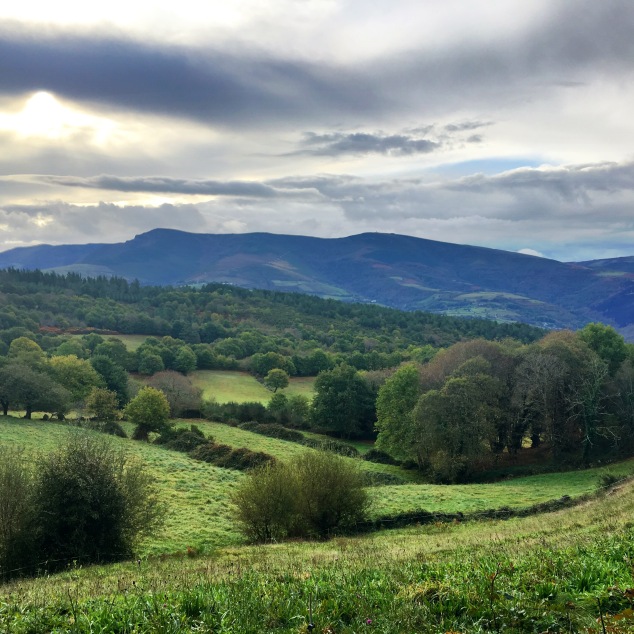 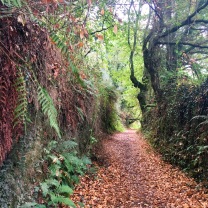 As we seemed to be going slow again, we sped up for the downhill walk into Sarria. Mr D is suffering so much, his body is one big itch & unfortunately he can’t enjoy these last days of walking. He really is over the Camino & ready to cross the finish line – still a week away. We came into Vigo de Sarria 1km out of Sarria for lunch. It was pretty good besides the meat being too tough again for Mr D. It was a cheap lunch for 14€ which included two big combo plates of food, 1 big bottle of water & my glass of wine – 1€! Unbelievable. We then continued into Sarria, up the ancient granite steps that takes us to the central hub of Pilgrim Sarria. 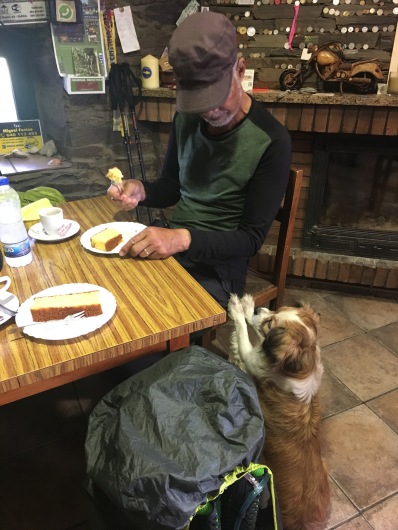 Here there is heaps of Albergues, but now some have closed including the ones I had wanted to stay at. So Mr D found the first one still open & we stayed there. We ended up paying for a room with 3 beds so 30€ as the Albergue worker had sent us to a room of 6 beds but only the top bunks were available. Mr D not happy with this, so we pay extra for our own room opposite the toilet & showers. And they are fun! The bloody light timers flick off quickly, the shower turns off quickly – yep, look forward to never seeing these again! Last night I was thrown into blackness while sitting on the toilet! Lucky a woman came in to trigger the light back on. We had a meander through & Sarria which is really not a nice looking town – it looks grotty, dirty & not appealing in the slightest. It is large with a population of 13,500. We came across the Alaskian short haired lady coming back whom happens to be staying in the same Albergue on the same floor 2 doors down. They are following us! I seem to have developed red spotty rashes on my ankles & feet in sympathy with Mr D! I think we are allergic to the Camino! 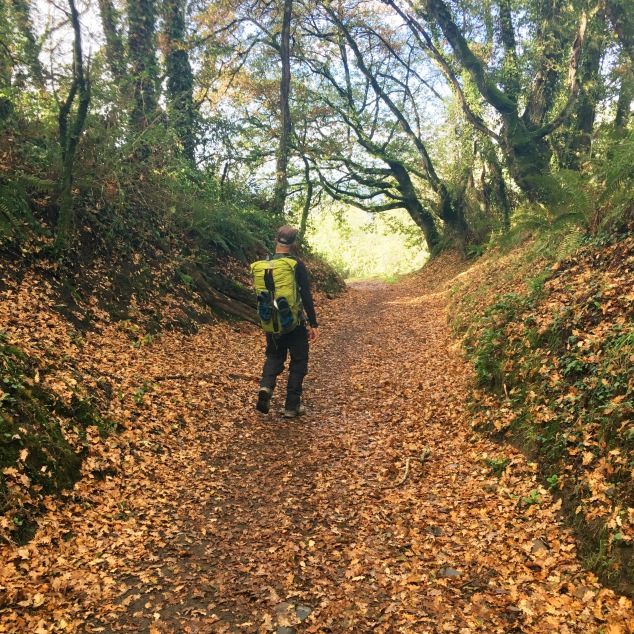 We decided on the furthest Albergue restaurant for dinner. The waiter was very friendly & funny. Instead of a peregrino meal, we had wood fired pizza each. My tropical pizza had pineapple, ham, corn, mozzarella cheese on it & tasted the best I have ever had! Mr D couldn’t even finish his. I had dessert, Mr D couldn’t work out how I found room for dessert, but I had walked up an appetite! I think I expect to have gained weight not lost weight on this adventure!

Sarria is the town where the newbies ‘wannabe Pilgrims’ come to complete the minimum mandatory 100kms to obtain the compostela certificate. But it is still about 120kms to go. ( Not sure as someone got angry with the kms on the markers & they have been ripped off most of the markers coming in today! ) This is where the Pilgrim numbers increase 3 times the number. For us ‘seasoned’ walkers from SJPDP & beyond, we have our own ‘views’ & comments to share around regarding the 100km Pilgrims in their clean, fresh clothes, new shoes & gear, as they merrily spring along in first day walking excitement. We shouldn’t sneer, or glare or stare down our noses at these Pilgrims. Rather smile sweetly with a ‘Hola! Buen Camino!’ & make them feel welcomed. Yes I will try this 😜. 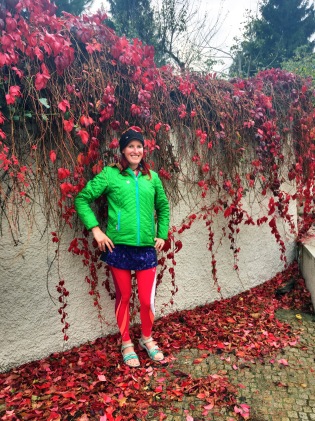 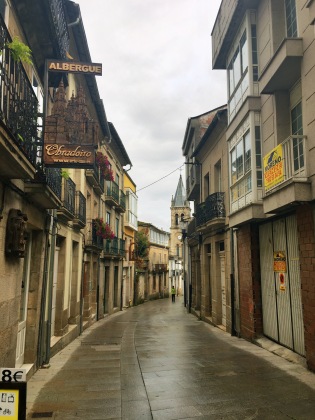