Mr D woke up feeling not too good. After 2 days rest, his cold had caught up with him again just when we are ready to set off! We couldn’t leave earlier as breakfast opened at 7.30am & I wanted my big breakfast before I started walking! So we filled ourselves up one last time – Mr D ordered an omelette to get him moving, then we set off leaving the key to our luxury bedroom with reception, walking out of this impressive building one last time. Leon had been an expensive stop for us & we had broken our budget 3 times!

It was 8.20am as we moved out of the city, the outer suburbs again looking shabby with broken windows, litter all around, a deceased cat with its insides on the outside which I didn’t really want to see. It took over an hour to finally be on the outskirts of the city. Mr D was not a happy chappy & was looking for an argument which I didn’t partake in. The Camino keeps testing us, but for it, our relationship is stronger – we haven’t divorced yet! I knew he had to put up with my grumpy moods when I wasn’t well in the earlier days, so I’ll put up with his while I prepare a wooden box…. 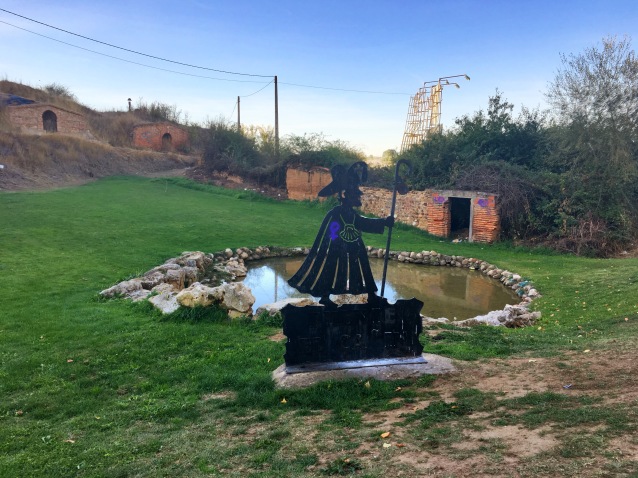 So just pass La Virgen Del Camino, an outer town of Leon, there is two options to walk. The real Camino Frances to Villadangos which runs besides the highway. Or to Mazarife, a more scenic quieter alternative route. We had decided on the latter & veered to the left. We stayed along roads till the town of Oncina, the traffic noise fading away the further we walked. I tried to cheer up Mr D with some terrible singing. Luckily, other Pilgrims were sparse here. Someone had even left a message on a sign for our old Latvia friend Laura, reading ‘keep walking Laura 😛’ haha! 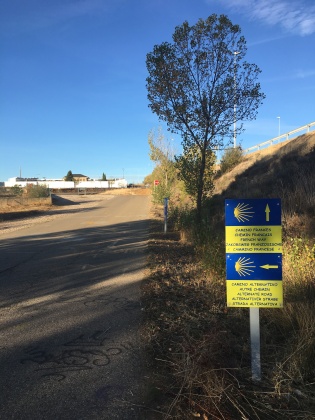 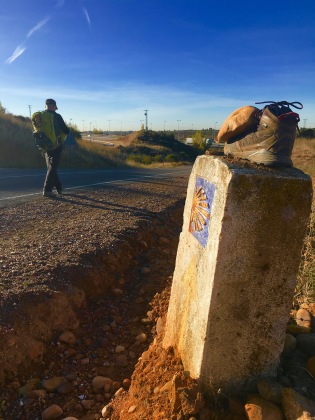 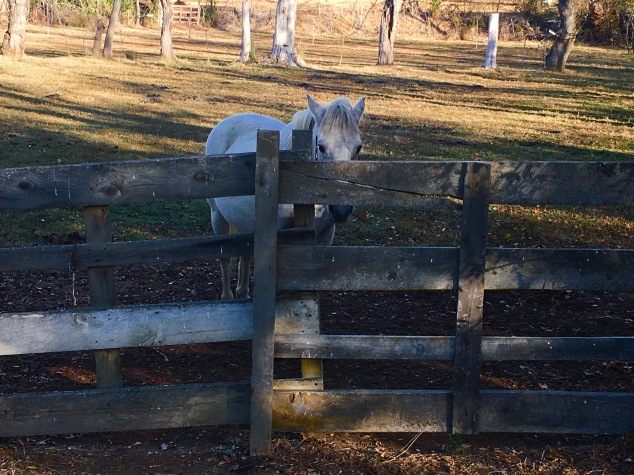 At Oncina I spotted a peregrino rest area which is off the Camino route but not too far. I was keen for a short break. Mr D feeling average was concentrating on getting to our end point so he continued along slowly to wait at the next town for me. He said today he was like Laura; ‘I’m JUST walking!’ I visited the Oncina en Camino rest point where a friendly man made me a cuppa & offered me a chair in the sun & brought over a basket with muffins & biscuits. You pay by donation, he even has a sort of tent enclosure with a proper toilet inside to use. Still full from breakfast I had a couple of biscuits to dip in my tea. The mans cute little dog called Tina was hanging around me wagging her tail & hoping for some biscuit crumbs. Afterward, he stamped my Pilgrim passport & asked me to dot in where I come from on the world map he had hanging up. That lovely spot & his kindness made my day. I brought the last remaining Camino shell necklace from him to remember the place. 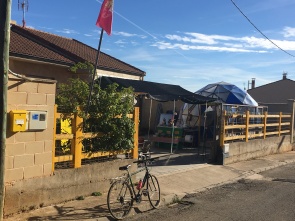 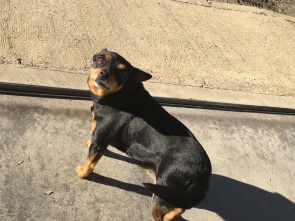 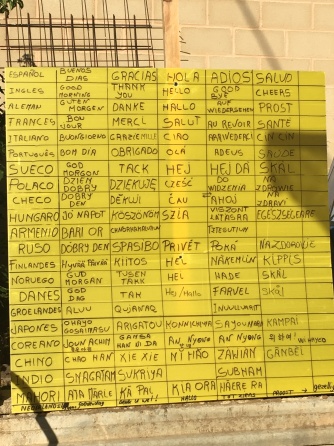 It was over an hour walking on my own to the next town. Here I walked on dirt gravel road over a relatively flat terrain. Similar to the Aussie outback bush – brown grasses with lots of small trees around. The only difference were the mountains in the far distance. It was so quiet out there, just the sound of my boots crunching on the gravel, my poles hitting the ground & the birds chirping away in the sky. I came across the German couple again here – it really is funny how we keep running into each other at random places! They said Mr D was a kilometre up ahead & was constantly looking back to see where I was & looking anxious. 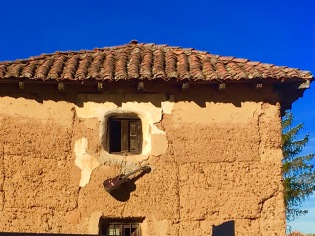 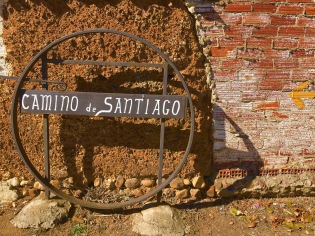 I didn’t see Mr D until I arrived at the town Chozas de Abajo. It was 12.30pm so lunch was in order. We had to veer slightly off track to a bar that was open. There wasn’t much on the menu & I don’t think the worker was too impressed with our arrival. She was smoking outside & chatting to a local & looked reluctant to serve me. We had Coke with ham & cheese toasted sandwiches. The Coke had no lemon slice added to it which Mr D picked up on. Then I annoyed the worker again when Mr D wanted a coffee to give himself an energy boost. I had to drag her away from her social banter outside again. 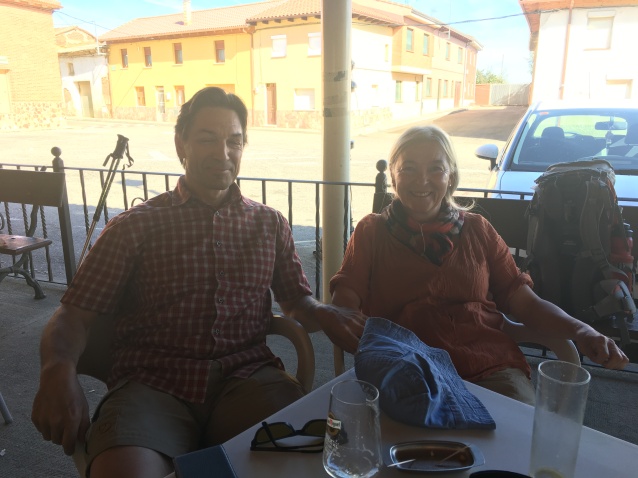 The German couple stopped for a break as well & asked to join us. So I got their names again as had forgotten them back in Sahagun. Harold & Sabine. We actually stayed longer than normal having a chat about our hobbies back home. Harrod it turns out has done a lot of boxing & teaches Tai Chi. I would never have guessed. We left for the final 3.9kms to Mazarife. I stopped for an impromptu photo next to one of the Camino markers while Mr D plodded on ahead & spotted the funniest little insect. It was a brown stick insect looking thing. I kept thinking it was a piece of grass weed. My interest gathered Harold & Sabine over as we all took photos of this grass weed looking insect walking around on its stick like 4 legs, its two feelers in front. That was another thing that made my day. How many Pilgrims would spot one of these critters on their Camino?! The insect blends in with the environment that most people would not know it exists. 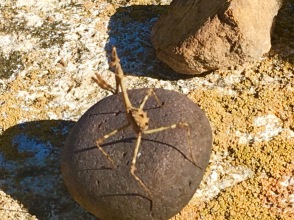 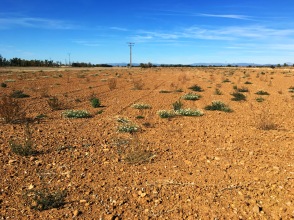 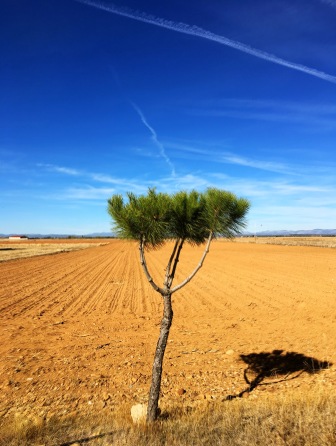 Mr D was way ahead again as I caught up in the town of Mazarife. That last section looked like the Meseta all over again. Mr D even said the same afterwards. He was very happy to survive the Meseta as he thought it was going to break him. Mazarife I call ‘The spiderweb town’. Walking in I had a long piece of spider web attached to my arm. People had long pieces of spiderweb sticking to their hair, blowing around in the breeze. The trees are choked with spiderwebs…. Can do without spiderwebs! I had selected Tio Pepe, one of the three Albergues in town. For 7€ extra, we got the last room with a single bunk bed in it for 2 people. Our own private room again! After our usual showering, clothes hand washing & setting ourselves up, we headed out in the courtyard for beer & a snack. I asked for Patatas Bravos as I had been craving some for awhile. But they put a hot chilli sauce over it which was a downer. Mr D said, even for him it was too hot. Well, at least he made it here & deserved his two beers! 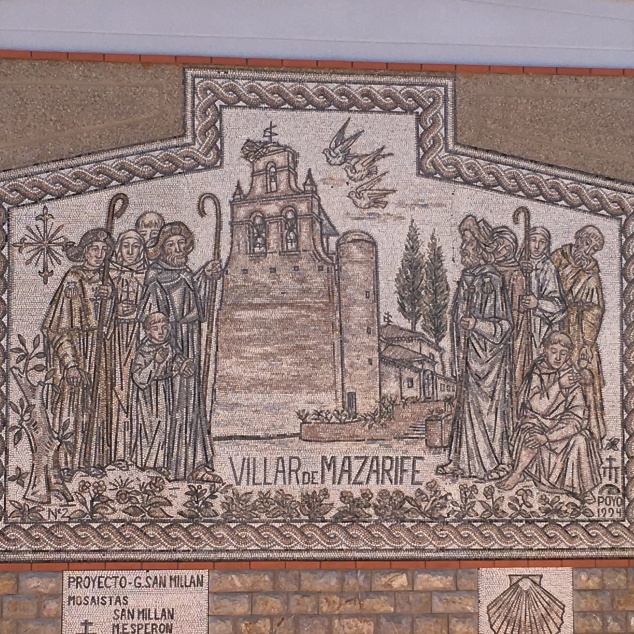 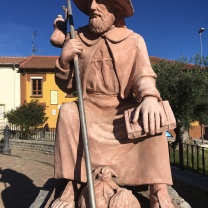 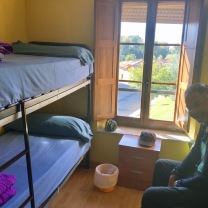 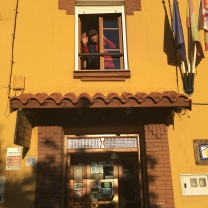 I went for my usual walk around town while Mr D had a siesta. In fact I think he spoke in his sleep asking me twice if there was a Farmacia. Downstairs at dinner he asked the question for the third time! You don’t want to be sick here – there is no Farmacia for 76kms! Dinner was a peregrino meal with limited options for 1st & 2nd courses – only two options each was the limitation. At least dinner was early at 6.30pm. I wasn’t too impressed with dinner. I think I had been spoilt in Leon with food choices & now have to get use to Pilgrim grub again. There was a new bunch of very loud Pilgrims in our Albergue & Mr D didn’t feel like being social with people. Poor Mr D – hopefully he sleeps well & feels better tomorrow! 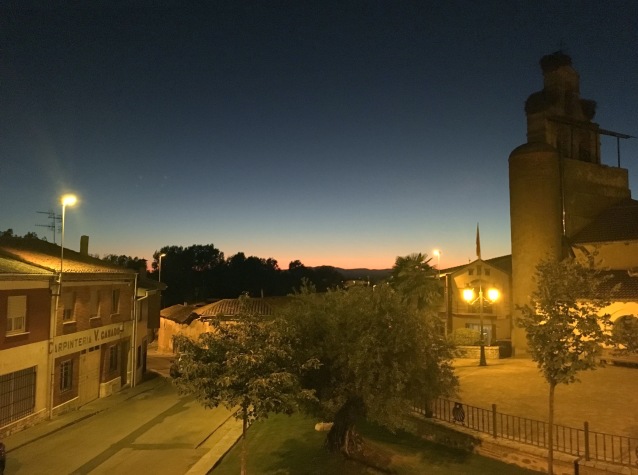