It was soooo nice to sleep in this morning. No hurry out of bed. The stupid auto lights in the hallway outside our room were broken & kept switching on off on off on off all night long! Breakfast was at lesiure through very simple hikers breakfast of toast & jam. Then we decided to take a leisurely stroll through the quiet city centre. Watching Pilgrims leaving the city. It was freezing cold again so we must of been nuts to be outside not in our warm hotel room. I had spurged on perfume & put some on before heading out. All the basics in normal life you don’t appreciate until you are a wandering sweaty, smelly Pilgrim. I felt part of society again just by smelling nice!

I had the best churros & white chocolate dipping sauce ever at a chocolatier cafe. The churros were fried & just delicious. Maybe someone in Perth could open up such a chocolatier shop then I’ll be very happy! Then we had to pack up & vacant the hotel which was a nice stay & the interior hallway walls were painted my favourite colour – green! 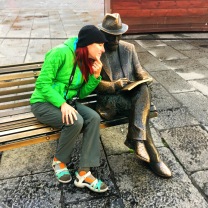 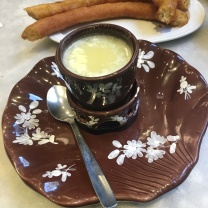 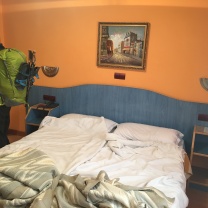 Then it was a 5 minute walk down the road looking for the Leon Parador. I saw a huge majestic building & then realised it was the Parador! You walk in & the entrance alone is spectacular. I’ve never stayed in such a place! We looked out of place in our Pilgrim clothes & backpacks. It is very expensive to stay, but as a Pilgrim you get a great discount.

5 star luxury is this great monastery building built in the 12th century & was used as a Pilgrims Hospital & the headquarters of the Knights of the Order of Santiago that protected the Pilgrims. In the 16th Century it was turned into a monastery building & has its own church attached. It became the Parador of today in 1928. Lots of history in these walls to be sure! Our room wasn’t ready yet so we went to leave our backpacks with the concierge, Mr D enquired about a vacancy for Monday night & they had the one room with the double bed available. So we had an impromptu moment to book a second night as well! We have pently of time left & we didn’t have a rest day in the Meseta so why not! John from Albany was there & was checking out. It took me a while to remember who he was as it felt a life time ago since we last saw him. Then I spotted the strange fellow also checking in his backpack.

So we walked back to the city centre for lunch & found one restaurant in the main laneway that was serving lunch at 1pm. Most others won’t start lunch till 2pm – WHAT!! There we could sit & people watch. The German couple walked by again & spotted us & we had a short change of pleasantries before they were on their way again. Tomorrow they walk on. I couldn’t help but feel slack for not walking on tomorrow – just for a minute!

Again we walked half the city back to the Parador. And once you are there – you don’t feel like going anywhere! We had a room up on the top floor. Very nice furnishings, very nice double bed! Very nice balcony overlooking the marvellous manicured gardens below. Very nice bathroom. It actually has a shower & a BATH! Mr D was saying he wished for a bath – the Camino was listening. There is a toilet & next to it – a butt washing station. Cool! We even get to parade around the room in our cool little Parador slippers. Another example of what you take for granted! There was even yummy milk body lotion which I rubbed all over – I feel & smell like a million bucks now! 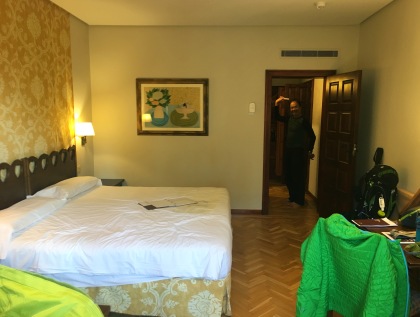 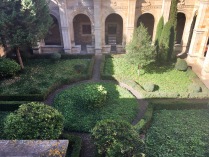 But the laundry service was too expensive, one of those charge for each item so it ends up costing way too much, and so we did some hand washing & hung it all out on the balcony. What would they think! Hand washing in a Parador! The cokes are more expensive than beer as they come in thick as glass bottles. I reckon they taste better too in the glass bottle. So we indulged with a Coke 3€ each & put up our feet followed by drinking wine the afternoon away. We had a stroll around the Parador which is full of rooms for sitting in, splendid furniture, magnificent gardens, amazing paintings & sculptures. You have to do the place justice by staying 2 nights – definitely! Meanwhile Mr D is still getting his physical test – all through the Meseta & now today he is coming up in red lumps all over, a skin allergy reaction caused by something. 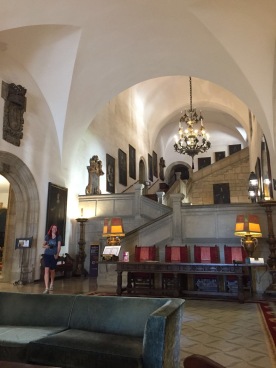 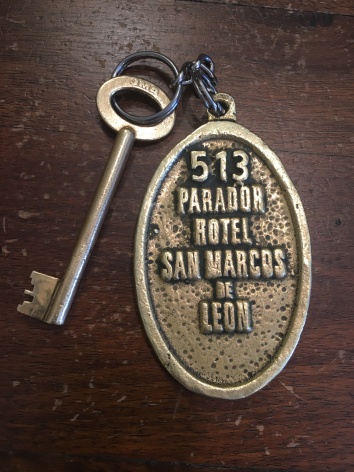 We decided to go to the awesome cosy bar downstairs & celebrated with a Baileys on ice each. Then we had booked into their restaurant for dinner. The restaurant was very fancy, with waiters so attentive, one would be pouring water, another pouring the wine & a third offering us a bread roll. And the food was gourmet. Mr D was highly impressed with his mains, an oven baked fish served as soup but more a solid round shaped dish with pawns & crayfish on top. He couldn’t praise it enough. Mr D ate till he said ‘My belly feels like it is hanging below my knees!’ At the end of the meal we get the bill – a bit expensive for Pilgrims! And we got these little chocolate treats that have the word Negro on the wrapper. Mr D having drunk more than enough was joking about his 4 chocolate treats but he says it is too PC to put his comment in as someone might be offended. So it has been edited out. But it was hilarious & we laughed our way back up to the 5th floor to our room. We were so exhausted from all our luxurious pampering & walking today that we need another rest day tomorrow for sure! 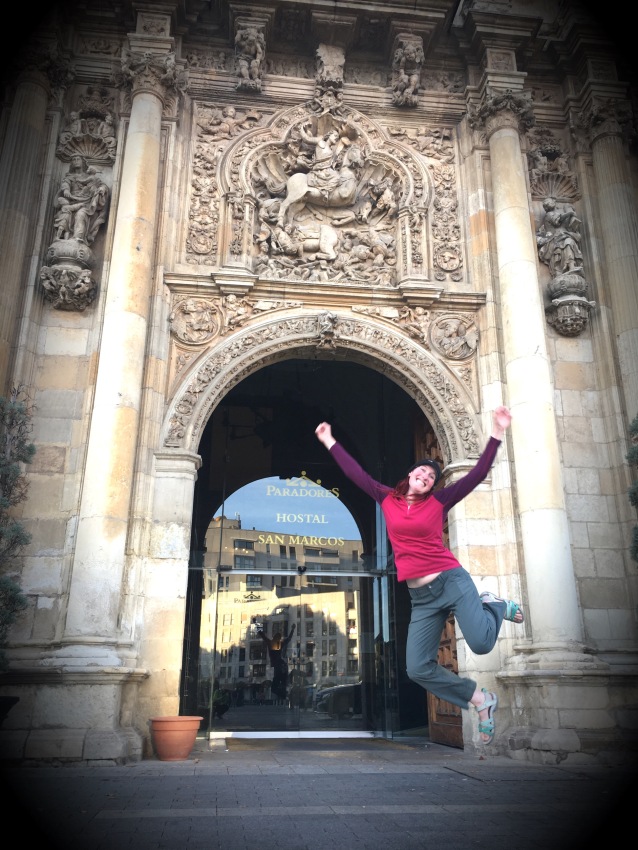