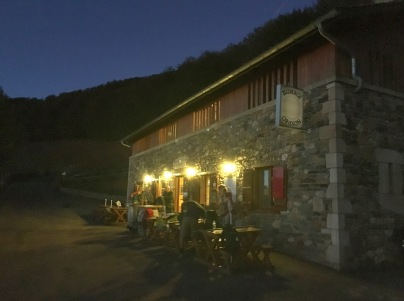 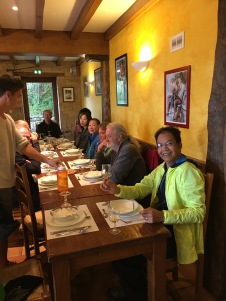 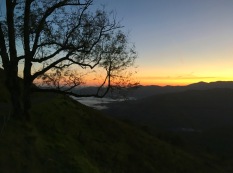 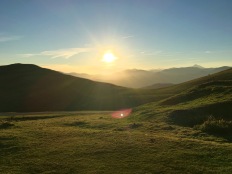 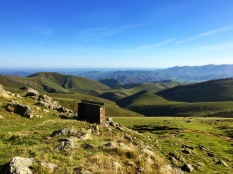 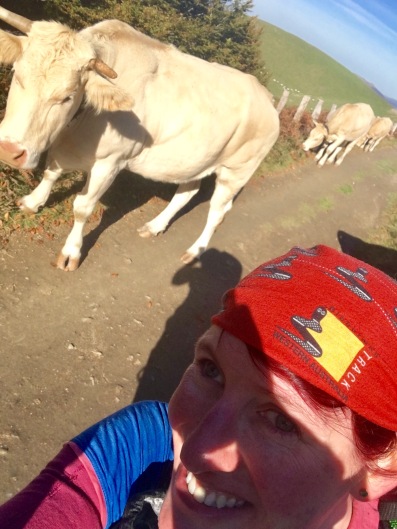 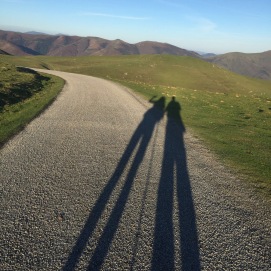 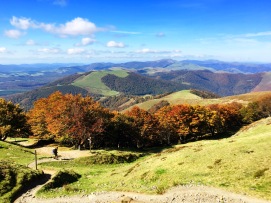 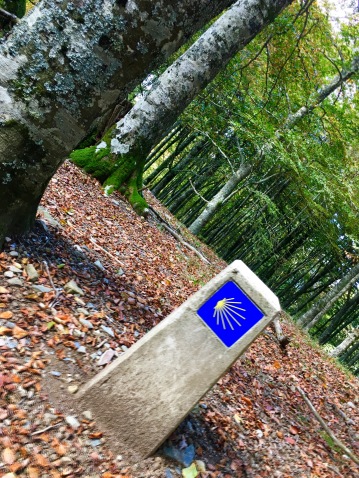 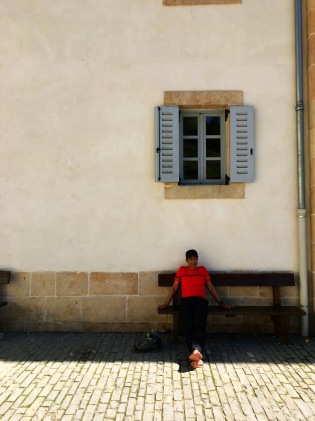 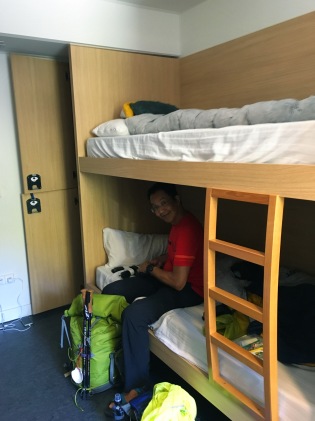 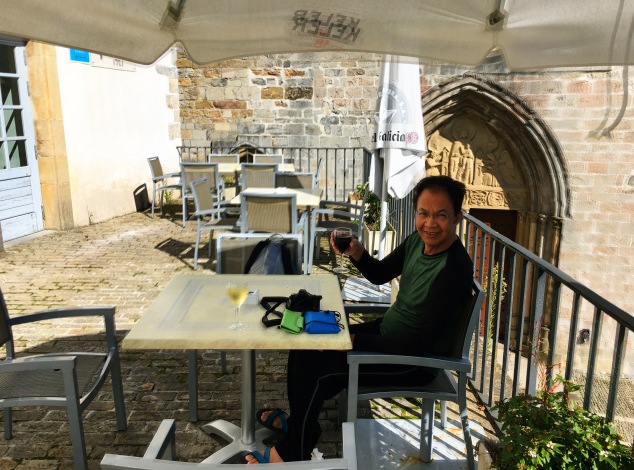 last nights Pilgrim dinner at Orisson was very memorable & special. We were all seated amongst 3 long tables with a 3 course meal. Mr D & I got chatting to a Canadian snow plougher bloke called Larry & swapped many a funny story. We met Larry & his partner Liz, as they sat on top of a tank by the side of the road as we came walking up for dinner. At the end of the meal we each stood up said our name where we come from & why we are doing the Camino. This was the highlight. There were 6 of us Aussies with 4 of us from Perth. At the end of our table was an American man whom finished with “And I DON’T like Donald Trump!” Next to him just as happens, was a North Korean man just out of military service. The amazing young lass working there offered us a car lift we couldn’t refuse back to our Albergue.

The next morning started with Mr D’s phone alarm going off at 5.45am waking everyone up. We quickly packed & headed    back to Orisson for breaky with our new Pilgrim friends from our Albergue last night. Jo & Sigrid, a retired older couple that have been walking from Germany for the past 4 months! I call them real Pilgrims as they have actually put on backpacks, walked out the front door of their home & started walking to Santiago. No train, bus or plane have they used to get here. We also met the two young Korean lasses at our Albergue & they seem very nice people as well. Breaky at Orisson was the usual bread rolls with jam & butter occupied with a bowl of tea / coffee. Mr D commented it was like drinking a bowl of coffee soup!

We set off early at 7.30am, the going was tough over Napoleons Pass, not only steep but the wind was relentless & made the going slower as the winds kept trying to blow us backwards. Beautiful blue clear skies & cold, cold wind. We stopped at a pop up cafe for Pilgrims for a coke & muesli bar to keep us going.

Going down out of the wind, it warmed up as we crossed borders into Spain with no passport checks or marked lines on the ground. One undesirable Pilgrim walked pass us without a hello, swearing & cursing away loudly- about the walk or us? His negative energy made us hope not to bump into him again! Everyone else is great & you always greet with a Hola & Buen Camino – the universal language amongst Pilgrims.

Coming down we went down the dangerous pass where we were advised to avoid! When I reflect back, the horses there followed me down then turned & went back up as to tell us we had gone the wrong way. Mr D said “it’ll be fine” so on we went carefully slowly down the descent, & arriving safety at our Albergue in Roncesvalles, a tiny village with historic monastery & buildings.

I bumped into one Pilgrim lady that was so upset with our little cubicles of 4 beds each in modern factilities, exclaiming ” I came here to stay in the big Monastery of 110 beds as shown in the movie The Way! I come to see all that was shown from the movie only, it is the reason I came!” ( this room opens in summer only due to increased Pilgrim numbers ). Then she said “I want to stay at that Albergue from the movie – you know, the one with the strange man! Do you know where it is?” “Nope” I replied. Then she needed me to help her find her bed number. She thought the lady with short hair on the lower bunk of her cubicle was a man. She pulled me out of the lady’s sight & said in panic, “I can’t sleep here! I can’t sleep with men!” I said “Well ask the lady there if there are men on the other beds”. She looked again & saw it was a woman & became embarrassed saying, “Did you know she wasn’t a man? I thought she was a man!” Now what was she thinking – she was going to sleep in a bunk room of 110 beds all filled with only women?!  Each to their own Camino….

Off to a very nice bar you couldn’t find the likes of in Perth, for a couple of Vinos & relaxation as we had earnt it off course! Jo & Sigrid came by & joined us briefly as Jo wanted to show Mr D the map of how far they have walked from their home. When then wandered off through the town, passing also Lottie & Hanne along the way. Then Mr D spotted Larry & Liz drinking at a cafe bar outside so we joined them for another drink! All in all, the afternoon was a social one! Our walk today about 18kms covered on foot.

We were sent over to the restaurant we were just at having our drinks for dinner. It was a peregrino meal with fancy meals on the menu. We sat with an Aussie lady that has moved to the UK. She had blisters all over her feet & had done the big walk from SJPDP today so she was done. She was saying to us tomorrow she would only walk to the next village & stay there. Lottie & Hanne whom we briefly met at Orisson last night. And this tiny religious woman with her husband. There was another older lady opposite me as well & another couple I hadn’t met. So the religious woman decided to say grace as we had started eating. Not asking us or anything. So we awkwardly sat our utensils down till she had finished. She was sitting opposite Lottie’s dad Hanne & asked a very direct personal question his way, “Is your wife still living?” What kind of question is that?! He replied “Excuse me?” So she repeated it again. I could sense he did not like her questioning & was reluctant to answer. But he did inform her his wife & Lotties mum was still alive. She then went, “Well, where is she? Why is she not here with you?” “Because she doesn’t like hiking”. This lady had poor mannerisms if she intended it or not. She was strange. Very intrusive. She gave her meal ticket to Lottie saying “Here, I trust you will pass this on to the restaurant staff for me.” as she & her husband that didn’t say a word took off for church mass. We all gave each other looks after she had gone, then broke out into laughter. The woman should of given her meal ticket herself to the restaurant staff!

We also said our goodbyes to our German friends, Jo & Sigrid, as they were having a rest day tomorrow. I’m sure we would see them again when they catch up to us. 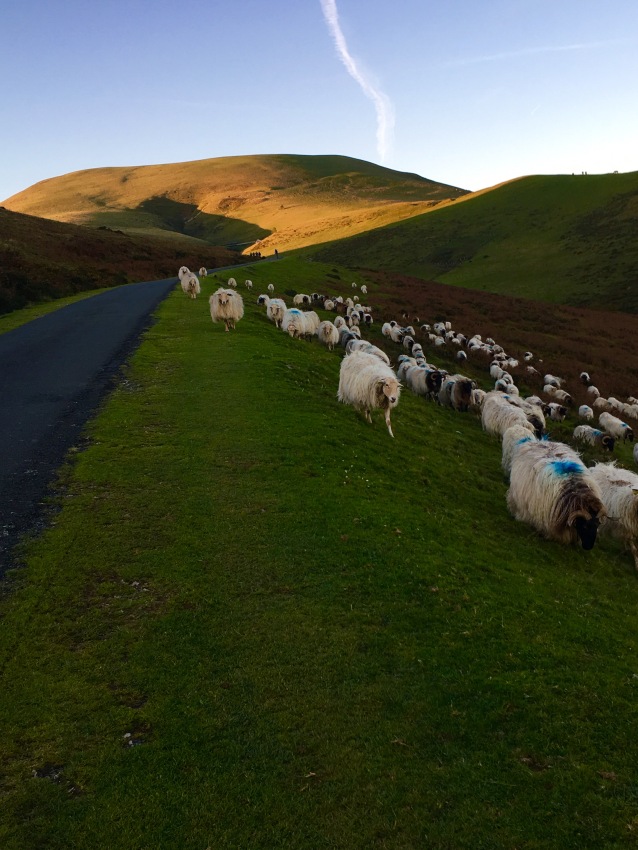